FundsIndia Strategy: The time to invest more and where to invest

In early September last year, we suggested that the next six months could be a good time to average (to see the detailed article, please click here). We came up with strategies to invest in tranches, and also said that we preferred large and diversified funds as heavy selling in large-cap stocks by FIIs impacted these funds more.

Below, we are giving you a few examples of how the averaging would have worked with some of the large-cap funds from our Select Funds list. Just take the case of Birla Sun Life Front Line Equity. From its high of Rs. 162, its Net Asset Value (NAV) fell by as much as 11 per cent to Rs. 144.6. You would have bought higher units then, while having enough opportunities later to average more. As a result, the fund’s return is positive when the market (Nifty 50), from that point till date, is actually down by close to 2 per cent.

Do remember, that we gave this strategy of investing in small tranches in addition to your existing SIPs, if you had them. That means, while you would have gained from your regular SIPs, these short-term STPs or SIPs (what we call ‘top ups’), through which we expected you to make larger sums to average, would have amply supported your rupee averaging. 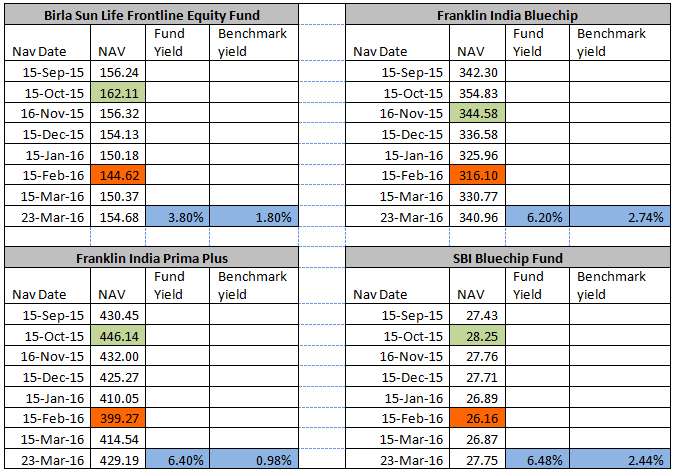 The above funds, taken for illustrative purposes, are from FundsIndia’s list of recommended funds, and are for the growth option.

The ides of March may perhaps bring the bad tide much later, as this month was actually good, climbing 9 per cent month to date (as of March 28). However, we think the market could be up for some more volatility over the next couple of months, driven by the following factors:

– Even as a rate cut by the RBI, if any, can bring some cheer to the market, experts have been cautioning about a liquidity deficit caused by the stalling of foreign portfolio flows. This is as a result of the fear of a Federal Reserve (US) rate hike in the coming quarter. Even if the RBI does resort to open market operations, it is said that it takes a full six months before can be fully reflected in the credit market. This could put pressure on the yields and borrowing plans of companies, and the currency.

– The Federal Reserve rate hike fear either in April or June, or both, could also remove the temporary support that the rupee has had in recent times.

– As markets await the fiscal ending earnings that will be known in its full proportion only by May end, the equity market can well remain range-bound and sensitive.

– Reports state that the Meteorological Department’s forecast, due mid-April ,may be cautious; as one of the key indicators (Southern Oscillation index) remains in the El Niño zone, and rivers have been drying up; the condition, however, may reverse by July-August with the onset of the Southwest monsoon.

– Added to this, with some state polls coming up in April and May, whether bills like the Goods and Services Tax Bill will be sidelined remains a question. This, despite the fact that almost all of the states going for polls are unlikely to be key for the market as the ruling government has little presence in these states (barring chances in Assam). The polls in Uttar Pradesh remain still away in May 2017.

What you can do

– We think this could actually be a good time to first deploy a lump sum if you did not use the opportunity we advocated in September 2015. Make a lump sum investment in any large-cap fund before the Monetary Policy on April 5. You could then follow this with regular long-term SIPs.

– For those of you who upped their exposure in the past six months, the next three months could once again provide opportunities. If you wish to invest in contrarian bets in large caps, you could consider funds such as BNP Paribas Equity, Mirae Asset India Opportunities and ICICI Pru Focused Bluechip Equity, as they have not rebounded like their peers as a result of their contrarian bets.

– If you are game for some risks, only then would we recommend that you invest a small proportion in mid-caps as well. While not all mid-cap stocks have corrected sufficiently, the mid-cap indices have started cracking in 2016, and the ensuing months could provide some opportunities. Invest in three large tranches over the next three months up to June end, and follow it with regular SIPs for a few years. Ensure you do this in a way that this does not exceed 20-30 per cent of your overall equity allocation. Funds such as BNP Paribas Mid Cap, Mirae Asset Emerging Bluechip and Religare Invesco Mid N Small Cap Fund (the last one would be the most contrarian, and hence, relatively more risky) could be some offbeat options.

– Do note that mid-caps can cause pain to your portfolio over the near term. Hence, unless you have sufficient exposure to large-cap or diversified equity funds, as well as an asset-allocated portfolio with debt, do not venture into this segment as your first option.

In all this, you may have to remember a simple point: averaging works only when you deploy more. And we are only stating the math here.

Consider this example. Let’s take a stock for simplicity’s sake. You have 100 shares of stock X bought at Rs. 100, and it has grown to Rs. 110. So you now hold Rs. 11,000 worth of X shares. If the stock falls to Rs. 105, deploying another Rs. 10,000 would get you 95 shares. Now, your average price comes to Rs. 102.5. This is still higher than the Rs. 100 at which you initially bought. That means you need the price to fall below your original cost price for you to average in one shot. Else, you should keep buying at multiple levels until your costs become low.

Averaging needs more money or deep pockets. But then, after you average at multiple prices, what if the stock fell to Rs. 90? Would you invest more? How long would you do this? It is to avoid this conundrum, that you invest reasonably sizable sums, but in tranches. The best way to do this is by running regular SIPs, and topping it with shorter tranches in market volatility.

This strategy is for one such top up.

24 thoughts on “FundsIndia Strategy: The time to invest more and where to invest”