Is Small the new Big?

What happened to Neil Woodford?

The recent incident involving the iconic and now infamous British fund manager, Neil Woodford (often referred to as Britain’s answer to Warren Buffett) where his funds failed to meet investors’ redemption requests due to insufficient liquidity has brought the focus back on an otherwise ignored topic – liquidity risk. His open-ended funds had made substantial investments in illiquid unlisted companies. When there was a sudden rise in redemptions following a weak performance, the funds were unable to liquidate those investments in time and had to suspend redemptions for investors who wanted to exit.

Thankfully, there have been no major liquidity-related suspensions in India – at least on the equity funds side. However, if something like this can happen in an evolved capital market such as the UK, then India can’t be immune either, and we can’t simply take liquidity in Indian mutual funds for granted.

Liquidity can be a concern especially when you invest in small cap stocks (and by extension in small cap funds) where trading volumes may be extremely low. We define liquidity as the ability of a fund to make timely exits and entries in stocks without impact costs (read as: will the fund be able to buy or sell a stock at a price close to the previously traded price).

Starting in 2015, many small cap funds saw a significant increase in inflows leading to far larger fund sizes. In the past, to cope with their larger size, funds had the flexibility to lower the proportion of small cap stocks (and invest more in large caps) in their portfolio if required.

However post the Oct 2017 SEBI re-categorisation norms, small cap funds have to compulsorily invest at least 65% of their corpus in small cap stocks.

The trend of increasing fund size in a category with relatively lower liquidity and a forced 65% exposure to small caps creates a ripe scenario for liquidity issues to crop up.

Here are three challenges that small cap funds can typically encounter as they grow in size.

Let’s understand this with an example. Suppose the corpus of a small cap fund called ABC Fund grows from ₹1,000 crores to ₹6,000 crores over time. To start with, 5% of the fund’s corpus (₹50 crores) was invested in XYZ, a small cap company. As the fund size grows six-fold, to maintain the 5% weightage, the fund will have to raise its investment in XYZ to ₹300 crores.

Such a large investment in a small cap stock with low trading volumes will have to be staggered over several days. This can push up the stock price and so the fund’s purchase cost. Similarly, when the fund exits the stock, the price may come under pressure.

If a fund has a large exposure to illiquid small cap stocks, managing risk based on evolving views becomes difficult for the fund manager as reducing/exiting these investments may be difficult if the underlying investment rationale changes. This liquidity issue only gets exacerbated as a fund grows and its exposure to such stocks rises.

In cases of prolonged periods of (and/or sudden) large-scale redemptions, the fund is forced to sell its more liquid holdings sometimes leading to unintended concentration risks in the remaining less liquid stocks.

A very large fund may not be able to take concentrated exposures in several small cap stocks. It may instead have to invest in a far larger number of small cap stocks to adequately deploy its corpus sometimes leading to several insignificant exposures (less than 1% holding).

This also constrains the fund manager’s ability to make large tactical shifts in the portfolio if required. The fund to address its larger size and to ensure liquidity may also have to invest more in large cap stocks and/or cash holdings (subject to a combined upper limit of 35%) which may dilute the positioning.

How large is too large?

While there is no precise formula to indicate when a small cap fund has become too large, we can get a fair sense of a potential size impact based on the following framework:

Let’s take the case of HDFC Small Cap Fund and see how it fares on each of these criteria. At an AUM of over ₹9000 crores as of Nov-end 2019, it is the largest small cap fund.

To understand how HDFC Small Cap Fund scores on liquidity, we look at the number of stocks that the fund can’t exit completely in less than 30 days.

The fund would have found it difficult to completely exit 55 out of the 72 stocks held as of Nov-end 2019. These stocks accounted for a whopping 83% of its portfolio, which is fairly high compared to several other funds in this category. See the table below.

These calculations take into account 30% of the daily average combined trading volume of stock on both the NSE and the BSE for 3 months ending Nov 2019 to calculate liquidity (days to exit each stock).

Next, we look at the proportion of HDFC Small Cap Fund’s portfolio that was invested in companies where it held large stakes.

No other small cap fund had such a significant share of its corpus in companies where its stake was 3% or higher. See the table below.

While such large ownership levels do not conflict with the long-term investment approach of the fund (reflected in low turnover), they could make the fund far less nimble to respond to adverse circumstances (including a significant liquidity event).

As a fund’s asset base expands beyond a point it can face increasing difficulty in finding opportunities in the small cap space. It can deploy the additional funds (subject to the upper limit of 35%) in large caps stocks and/or raise its cash holdings. In the case of HDFC Small Cap Fund, this has been in the form of a sharp rise in its cash holding. 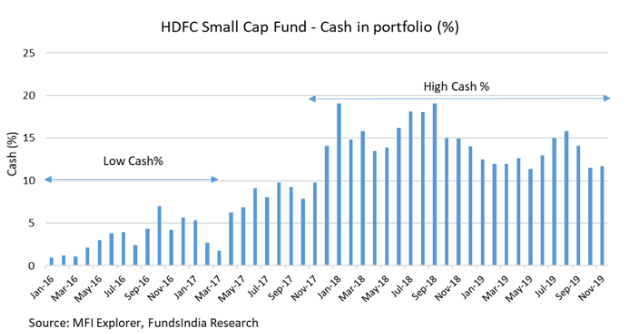 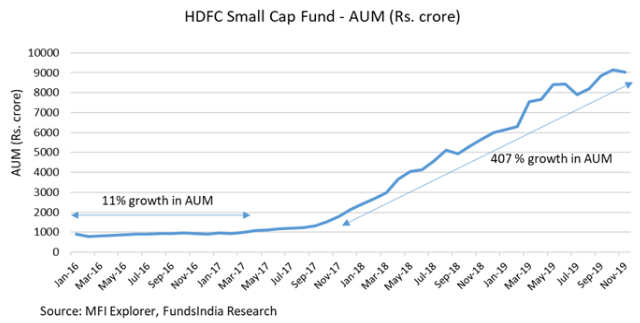 One way to deal with sudden large inflows is to allow cash build-up in the portfolio. This gives the fund manager time to put the new money to work, but it also dilutes the performance of the rest of the portfolio in a rising market.

The relatively high proportion of cash seems to indicate the above issue, as the fund house has historically not taken cash calls otherwise.

The fund’s portfolio turnover ratio (PTR), an indicator of how much it churns its portfolio – however, is low – at 3% in Nov 2019. This has been so in the past too (chart below). The low PTR has worked in the fund’s favour by helping it manage its portfolio despite its growing asset size. 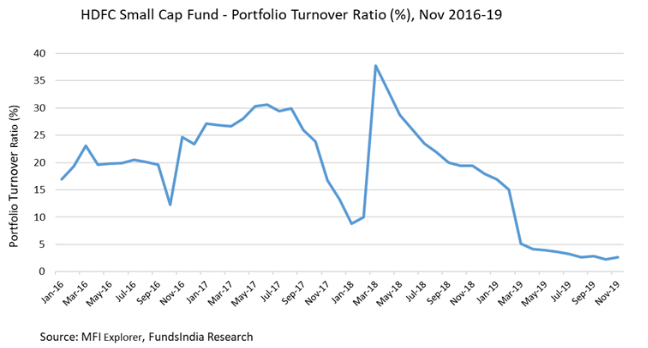 Also, while the fund’s Top 20 Stock Concentration has remained relatively stable at 41% to 50% for the last 2 years, the share of insignificant stocks (individually accounting for less than 1% of the portfolio) has risen. In Nov 2017, such stocks comprised only 10% of the fund’s portfolio. This went up to ~16% by Nov 2019.

Saying no to new inflows?

However, despite its growing size, HDFC Small Cap Fund has never imposed restrictions on new subscriptions/inflows, unlike other large small cap funds. Let’s look at a few funds to see at what stage such restrictions were introduced. 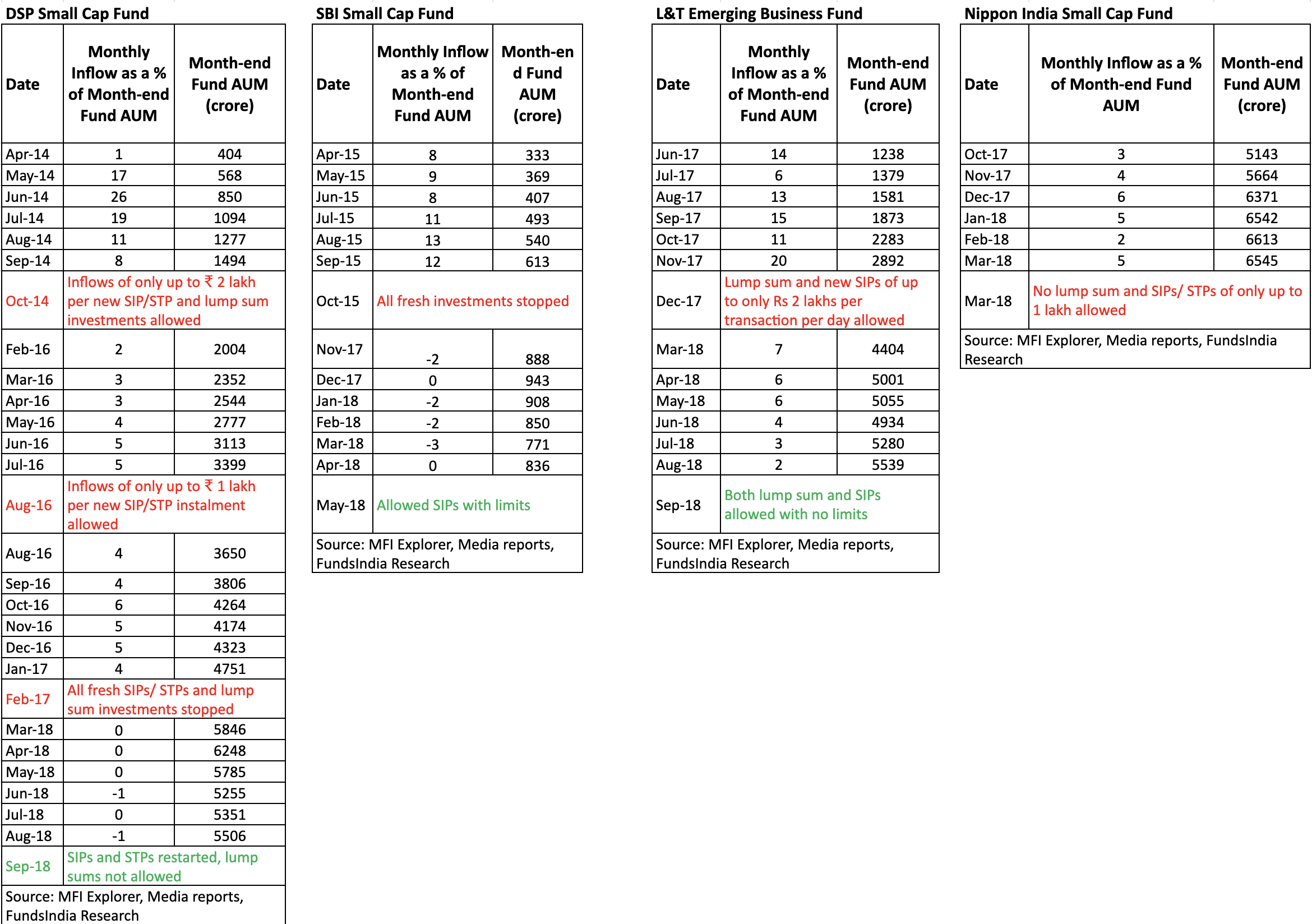 We see many funds have imposed restrictions on new subscriptions whenever the monthly inflow as a percentage of the fund’s AUM rose to 4-5% or higher for a few months at a stretch. Once the surge eased, funds eased the restrictions.

HDFC Small Cap Fund, however, hasn’t introduced any restrictions despite receiving significant inflows over several months in the past.

What’s worth noting is that the surge in inflows (chart below) happened at a time when small cap stocks were at their all-time highs in 2018. Unsurprisingly, as the fund’s corpus expanded rapidly from Oct 2017, its cash holdings also shot up given the lack of investment opportunities in the expensively valued small cap space.

Now if the cash holdings were a market-timing call given the valuation concerns, we would have preferred the fund to have restricted inflows rather than accepting them and keeping it as cash.

Taking into account all the above factors, there are initial indications that the liquidity profile of HDFC Small Cap Fund appears to have become tighter on several fronts.

That being said, however, given our concerns around the fund’s current liquidity profile, we find it prudent to recommend our investors to stop incremental exposure towards the fund while continuing with their existing exposure. We will continue to monitor the situation closely and suggest any further steps, if necessary. Updates will be provided accordingly.

Admittedly, there are a lot of what-ifs but we prefer to err on the side of caution.

A few others such as Nippon India Small Cap Fund, Franklin India Smaller Companies Fund and L&T Emerging Businesses Fund are also slowly becoming large. While there are no immediate concerns, one needs to watch out for such ‘large’ small cap funds given the risk associated with their growing asset size as highlighted.

This article was authored by Arun Kumar and Maulik Madhu.