India Inc. saw a drop in profits for the December quarter. This was largely a result of exceptional losses in few large companies. For 496 out of the 500 BSE 500 companies sales expanded a healthy 19% for the December quarter while profits declined by 20% over a year ago. This significant dip was primarily caused by a quarterly loss in Tata Motors. This auto major alone incurred a massive loss of Rs 26,993 crore, after it wrote off a one-time loss from its JLR business. There are more such companies who have reported one-time gains or losses that distort the picture of ongoing operations. Removing the impact of such exceptional items, net profits for the universe expanded a healthy 10.3 percent over a year ago quarter. 3 out of 5 companies in this universe say an expansion in their adjusted profits over a year ago.

What came as a positive surprise was the improvement in earnings of banks. In fact, this sector buttressed the overall earnings growth for the universe. Still, losses from telecom companies and shrinking margins of Oil Marketing Companies (OMCs) kept earnings growth sedate.

Results for 496 companies. *The impact of exceptional items has been removed from net profits.

Healthy sales growth of 21% for the large-cap companies did not translate into sound profits.  Adjusted net profits expanded by a mere 9% for this market-cap segment. OMCs such as IOCL, BPCL and HPCL reported around 80% decline in profits because of rising crude oil prices. Input costs, in general, went up for large-cap companies. Raw material costs as a percentage of sales has increased to 44% from 40% last year. Companies like Reliance Industries, Tata Steel and Piramal Enterprises also saw their interests costs going up significantly. 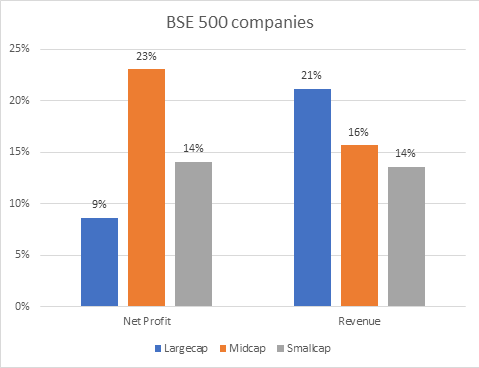 Mid-cap companies did better than large-caps. Leaving out IDFC First Bank which distorted the picture, the rest of the midcap universe saw a 15% expansion in both sales and adjusted net profits. Cost pressure was observed in this market-cap segment as well, with operating expenses increasing by 16.8% compared with a year ago.

Small cap companies also saw a profit growth of 14% and revenue growth of 14%. Growth was entirely bottom-up in this segment. Media companies such as Inox Leisure and TV18 Broadcast, Finance companies such as Reliance Capital, Vijaya Bank and DCB Bank, a number of auto component and capital goods plays including Tube Investments, Sundaram Clayton, Graphite India were some of the prominent stocks to drive growth for this segment. However, about 10% of the companies in this segment continue to languish in losses. This was the same a year ago as well.

After several quarters of reporting losses, banks moved back to profit zone from losses a year ago. That said, profits are still 50% lower than 2 years ago (December 2016 quarter) when the sector was in a better shape. Revenue grew 16% in December 2018 from last year and 5% from last quarter. Profits, however, were mostly restricted to private sector banks. This segment saw a robust 24% growth in net profits over a year ago. PSBs, on the other hand managed to simply limit their losses, thanks to lower provisioning. As asset quality for most public sector banks improved, provisioning for bad loans reduced by 23% from  a year ago. State Bank of India stood out, as it staged a turnaround, reporting a profit of Rs.4709 crore compared with a loss of Rs.1887 crore last year. Among the bigger banks, only ICICI and Yes Bank bucked the broad trend in the private sector space by reporting a slower growth in profits.

Non-banking Finance companies managed to grow their profits (10% over a year ago), although the pace of growth halved compared with their stellar performance in 2017-18. The popular names such as DHFL, Indiabulls Housing Finance and Mahindra & Mahindra Financial Services, Edelweiss Financial Services and JM Financial all saw a decline in profits on the back of liquidity crisis and lower disbursements.

Capital goods on a high

The engineering and capital goods space saw a fully charged quarter, powered by engineering conglomerate L&T. Adjusted net profits for this sector expanded 56% with sales growth of 21%. PSU pack of BEML, Bharat Electronics, BHEL and Bharat Dynamics all bounced back, aided by a low base from poor performance last year. Others such as Siemens, Thermax, Graphite India, HEG and ISGEC Heavy Engineering and L&T Technology Services saw robust growth.

Telecom companies continued to be burdened by lack of pricing power. After consolidation, the two main listed players are Bharti Airtel and Vodafone Idea. Bharti Airtel reported a net profit of Rs.86 crore, because of huge exceptional gain. Removing that, the company posted a loss of Rs.1328 crore compared to a profit of Rs.545 crore last year. In its first full quarter after the merger, Vodafone Idea reported a deeper loss of Rs.4204 crore against a loss of Rs.1285 crore last year. This is despite a revenue growth of 81%. Operating expenses stood at a higher 64% to sales compared to 50% last year, eating into the profits.

Oil Marketing Companies felt the heat of higher crude prices. Reliance Industries, being a conglomerate, is the only exception. Smaller refineries such as Mangalore Refinery & Petrochemicals and Chennai Petroleum Corporation went into losses while the others saw steep fall in profits. Input costs for these companies stood at 77% of sales against 67% for the same period last year.

Aviation companies also suffered with a 93% fall in profits from last year. Jet Airways was the major loser, with a loss of Rs.588 crore against a profit of Rs.165 crore last year. The already cash strapped company was burdened with higher fuel costs, bringing the margins down. Spicejet and Interglobe Aviation also widened their losses.

Oil exploration companies, on the other hand, benefitted from rising crude oil prices. Oil India and ONGC saw a profit growth of 75% and 65% respectively.

Lower demand for automobiles led to the auto and auto ancillaries segment growing their sales by just 8% while profits grew a mere 2% over a year ago. Operating margins shrunk to 12.4% from 14.1% last year. Ashok Leyland was the only company which saw a decline in sales from Rs.7051 crore to Rs.6245 crore while market leaders Maruti Suzuki and Eicher Motors had flat sales growth. Both the companies posted losses for the quarter. However, Bajaj Auto, Mahindra & Mahindra and TVS Motor managed to grow their profits by 20%, 39% and 16% respectively from last year. Auto ancillaries appeared to be showing signs of turnaround. Timken India, Bosch, Bharat Forge, JK Tyre & Industries were among the noteworthy performers.

Other notable sector to see traction in growth include, logistics, real estate, infrastructure, pharma and retailing. FMCG and IT remained steady while ferrous and non-ferrous metals saw flat to lower earnings growth.

Overall, the big picture for earnings belies a number of individual growth stories and turnarounds in Corporate India. For example, among sectors, banking, real estate, paper, healthcare and infrastructure saw declining profits or were in losses in the December 2017 quarter. All of these have turned around in the past quarter. Margin challenges, arising primarily from raw material cost for manufacturing and cost of funds for the finance space will be factors to look out for next quarter.