Where have Mutual Funds been investing

Last week, we analysed the distribution of FII inflows into equities. Unlike FIIs, which were net sellers in 9 out of 10 months, mutual funds (MFs) turned out to be net buyers in all 12 months last year. Let us look at what the funds have been buying and selling.

Mid and Small companies have been favourites

Unlike FIIs, MFs have been keener on relatively smaller companies. The fall of 2018 was much sharper in mid and small cap companies. The Nifty 500 index represents virtually the entire market capitalisation. In this index, mutual funds reduced their holdings in 59 large cap companies in the March 2019 quarter compared to the December 2018 quarter going by the companies’ shareholding pattern data. They increased their holdings in only 38 companies.

However, in mid and small caps, a greater percentage of companies saw increasing holdings. MFs hiked stake in half the small-cap stocks present in the Nifty 500. Mid-cap activity was even higher, with six in every ten stock seeing a rise in MF holding in the March 2019 quarter. 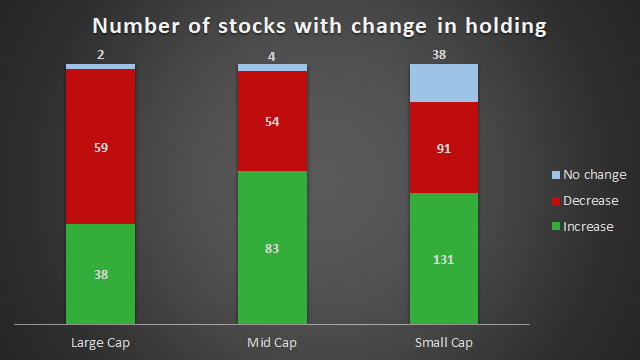 On the sell side, Bajaj Auto and Eicher Motors were the least favourite stocks and saw the maximum reduction in MF holdings. Eicher Motors, owner of the premium two-wheeler brand Royal Enfield, has been suffering from a fall in volumes amidst lacklustre demand. Bajaj Auto, makers of one-time market leader Bajaj Pulsar, has lost market share over the years. Escorts is another auto stock seeing a drop in MF holdings. Outside these few auto stocks, however, MFs have not made significant reductions in their holdings. Most stocks, other than a few such as UPL and Dr Reddy’s Labs, saw only marginal falls.

Among mid cap stocks, Emami saw its MF holdings go up by 5.7 percentage points to 13.2% in the March 2019 quarter. Emami has struggled to maintain its profit margins and faced troubles over pledged promoter holding. The stock tanked 47% between December 2017 and February 2019. Other mid-cap consumer names include Relaxo Footwear and Jubilant FoodWorks where MF shareholding has jumped over 3 percentage points.

Sheela Foam was one stock which stands out among small caps, where MF holdings went up from 9.66% in December 2018 to 16.97% in March 2019. Strong brands such as Sleepwell and consistent profits coupled with a steep price slide could have prompted MF buying.

Though MFs bought heavily into several small-cap stocks, they also did a good amount of selling here. Of the ten stocks which saw the most fall in MF holding, all but one were small-caps. In Hathway Cable, MFs pretty much sold off their entire holdings. Kaveri Seed, Max India, Care Ratings, Reliance Capital, Suzlon Energy, and Raymond are other notable names.

When it comes to sector trends, clear preferences were in financials and consumer where earnings and growth visibility is higher. Here’s a breakdown of MF sector moves.

In NBFCs, currently under fire for a host of issues, MFs turned selective. Outside of leader HDFC, MFs reduced their exposure to most finance companies. In the mid cap space, MFs made small increments and bigger reductions.

Like FIIs, MFs have also shunned the auto sectors as sales have been under pressure and volumes have declined considerably since last year. However, fund managers are relatively more upbeat in the auto ancillary space. Most of these companies fall in small and mid cap segment. MFs have bought into replacement demand stocks Balkrishna Industries, Amara Raja Batteries, and Exide Industries.

There has been some rebalancing in the IT space. MFs have cut down on HCL, Tech Mahindra, and HCL Technologies and bought into Infosys and TCS. The top 5 IT companies have done equally well this year in terms of share price. All of them have risen around 10% YTD, Wipro leading the pack with a rise of 15%. This indicates some profit taking in this segment. Smaller IT companies have also been in favour. Sonata Software and Persistent Systems have been the favourites in this space.

The consumption space (excluding auto) appears to have been the most favoured segment in the first quarter of this year. While large caps in this segment have not seen much by way of inflows, over three-quarters of mid caps and small caps stocks in the consumer space have seen their MF holdings go up.

Cyclical and other Sectors

In the healthcare sector, MFs have reduced their holdings in 8 out of 9 large cap companies. They have been more upbeat on mid and small cap stocks in this space.