Investors who wish to ride the current equity market rally to start building an equity portfolio can add UTI Opportunities as a part of their core holding. A large-cap bias, ability to contain downsides, and consistent performance over the last five years make this fund a good choice.

The fund delivered over 15 per cent annually in the last five years. That’s a good 5 percentage points against its benchmark – BSE 100. It is also far superior to the category average of 11.7 per cent annually over the same period.

The Fund and its Suitability

UTI Opportunities is a ‘go-anywhere’ fund that seeks to invest across sectors and market-cap segments where it sees opportunities. Like most opportunity funds, it did seize opportunities across market caps. However, in the last three years, the fund has steadily seen a large-cap bias in its portfolio. UTI Opportunities can form a part of an investor’s core portfolio for its above characteristic.

Overall, market sentiment is improving over the last few months. Falling inflation numbers, declining crude prices, and hopes on interest rate cuts have resulted in an improved outlook for corporate earnings in the next financial year. A market re-rating could trigger a further rally in large-cap stocks.

Current valuations of large caps are slightly above fair value zone. Hence, a re-rating may not happen in the short term and short-term profit booking, in segments/stocks that have run up, cannot be ruled out.

Investors can consider taking the SIP route to invest in equity funds at this point. Opportunities to average costs remain ripe over the next one year. 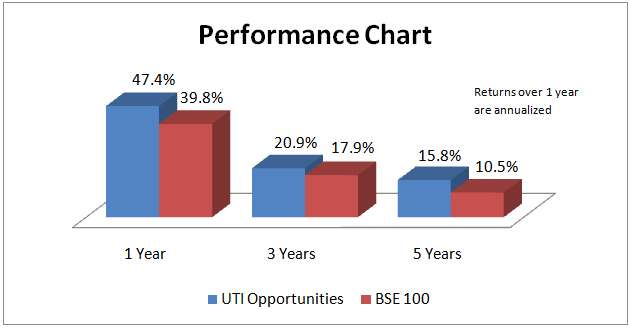 In 2013, the fund managed to make some gains in a bear-dominated market, despite holding less than 5 per cent in cash. It successfully contained downsides through adept calls, and ended with 5 per cent positive returns. In 2014 so far, it was able to outperform (by 7 per cent) its index, BSE 100, by posting 42 per cent year to date gains.

The above performance was made possible by some right sector moves such as pruning holdings in an overheated FMCG, and increased exposure in the IT space.

Its risk-adjusted return measure (Sharpe ratio) is also higher when compared with its peer group. On a risk-adjusted basis, the fund scores better than most large-cap peers, but lags behind opportunity funds such as Reliance Equity Opportunities. But that is only to be expected as the latter is a more aggressive fund with a higher mid-cap bias.

UTI Opportunities went into cash for a good part of 2008 and early 2009 to contain declines following the financial crisis. But it did miss out the early part of the 2009 rally as a result. The fund though, appears to have taken a more balanced approach since Anoop Bhaskar’s takeover, moving not more than 5-8 per cent into cash during market falls. Its large cap exposure has grown from the 60-70 per cent range in 2010-11 to the 80 to 85 per cent range now.

Another fund from the same stable, UTI Equity, too sports a large-cap bias and is managed by the same fund manager. The key difference between the two portfolios is that UTI Opportunities holds a more concentrated portfolio of about 45 stocks, as against 65-70 stocks in UTI Equity. The latter has almost the same proportion of mid and small-cap exposure, but holds more number of stocks from this market cap.

In terms of sector choice, besides continuing with banking and finance stocks as its top sector, UTI Opportunities recently hiked stakes in the auto space with the addition of Maruti and Hero Moto Corp. It also went underweight on FMCG by exiting ITC. Infosys, TCS, ICICI Bank and HDFC Bank are the top holdings of the fund at this point in time.

The fund is managed by Anoop Bhaskar.