Investors looking for contrarian bets to buy into, can consider investing in L&T India Special Situations Fund. Investors need not less than a three-year perspective in the fund.

With a compounded annual return of close to 23% over the last 5 years, the fund comfortably beat its benchmark, S&P BSE 200, by a good 6 percentage points. It also delivered a higher than equity category average of 19% annually over the above period.

The Fund and Suitability

L&T Special Situations seeks to invest in companies whose stocks are undervalued as a result of certain abnormal/unusual circumstances that the companies may be into temporarily.

For instance, when telecom licenses were scrapped for several players in certain circles in the country, it seemed like a special situation. But it eventually led to higher market share and pricing power for a few other players. Hence, a temporary regulatory issue that disturbed some players led to peers’ gaining from the situation.

A reasonably leveraged company, gaining significantly in terms of operating leverage as a result of even a small improvement in capacity utilization (when economy turns), may be a special situation company. Sectors such as cement could be examples of such opportunities.

Other corporate actions or even sectors like FMCG, for instance, that have now moved out of market favour can also come under the ‘special situations’ radar.

L&T Special Situations is a theme fund, albeit encompassing a broad theme. Investors need to treat this as a tactical investment and have a minimum 3-year view and review it. Exposure to the fund can be restricted to 10-15% of equity exposure. SIPs would help make the most of the current market volatility. 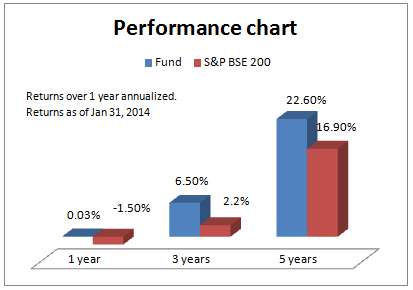 L&T Special Situations has done reasonably well in the last 2 years, delivering about 12.3% annually, despite a very turbulent market and many undervalued themes not turning around to unlock value. But in times when markets do turnaround, the undervalued themes are the ones to be first recognized and re-rated.

This the fund, has taken to its advantage in the past. Over the one year, post the lows of March 2009, the fund delivered a whopping 142% absolute return, thus adequately making up for the losses it generated in the down year.

Taking exposure to beaten down stocks or sectors may result in losing out on returns in years that see short growth-driven rallies. But overall, the fund beat its index 83% of the times, on a rolling 1-year return basis between January 2011 and January 2014 (3 years), suggesting that its bets did not go too astray and outperformance of index has been consistent.

Banking stocks continue to be the fund’s top sector exposure, although the fund is underweight when compared with it’s benchmark – S&P BSE 200.The fund benefited from overweight positions in banks such as ING Vysya Bank and Federal Bank, even while it avoided public sector plays.

Similarly, it took early exposure to stocks such as MindTree and KPIT Cummins Infosystems, mid-sized plays that benefited from the US story.

Currently, with FMCG stock valuations coming off their highs, the fund has upped its exposure in the space compared with a year ago. This, together with petroleum products, auto and auto ancillaries, cement and capital goods could be segments (that the fund is currently exposed to) that could benefit from regulatory-driven or economic recovery.

As mentioned earlier, even in volatile markets/economic downturns, special situations emerge, causing some players to gain from the scenario. While a part of that opportunity may already have played out, the bigger opportunity, that arises across several themes, when an economy bottoms out and may be at the cusp of a recovery, could deliver returns higher than opportunities in a regular diversified fund.

To that extent, we think this could be a good time to start looking at such potential, given where we are in terms of various economic/corporate parameters. Just to give an example of the kind of quick turnaround the fund saw – between the lows of March 2009 and a few days in to June 2009, the fund delivered an astounding 102% return when most diversified funds managed between 60-80%.

While such returns may not come by easily, this suggests that opportunities locked for long can quickly burst out when the wheels turn.

The fund is managed by S.N. Lahiri.