Fidelity-L&T Mutual scheme mergers – what you need to know 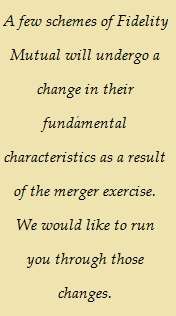 But a few schemes of Fidelity Mutual will undergo a change in their fundamental characteristics as a result of this exercise. We would like to run you through those changes. It is important for you to know this as a changed fund strategy or objective may or may not fit into your own goals and purpose of holding the fund. Such changes pertain to three schemes given below:

Fidelity Global Real Assets is an international fund that invests in real assets, be its natural resources, factories or real estate through its parent fund (of Fidelity International). As a fund of fund, the Indian fund was not too actively managed as it invested in its parent fund. Hence expenses were low.

With effect from November 16, this international fund will have a recurring expense of upto 2.5 per cent as against 0.75 per cent earlier. It is noteworthy that this fund was investing in Fidelity’s own global fund (feeder route). Now with the two management being different, the investment management and advisory fees is hiked from 0.05 per cent to 0.75 per cent. This is the primary reason for the increase in expense. This will result in more charges on your NAV.

The fund will be renamed as L&T Global Real Assets Fund.

The fund invests in equities without any sector or market cap bias.

Change: The fund will have a large-cap focus.

The fund will be renamed as L&T India Growth fund and will henceforth focus predominantly on large-cap stocks that fall in the BSE 100 or CNX 100. A few other schemes of L&T Mutual – L&T Hedged Equity, L&T Opportunities Fund and L&T Growth Fund will also be merged with this scheme. It will be benchmarked against BSE 100 from BSE 200 earlier.

Fidelity India Children’s Plan is an umbrella fund that houses three schemes – Savings Fund, Education Fund and Marriage Fund. With the merger, the three schemes will be unbundled with the aim of opening it up for a larger universe of investors.

Change: all categories of investors can now invest instead of only a minor earlier. Lower exit load.

The fund will be renamed as L&T India Prudence and will be available for investment for all categories of investors as opposed to only a minor earlier. The scheme strategy will broadly remain the same although it is not projected any longer as a children’s portfolio. The fund will invest a maximum of 75 per cent in equities as against 100 per cent earlier. The normal allocation is aimed at 70 per cent equities and 30 per cent debt, like a typical equity-oriented balanced fund.

The fund will have an exit load of 1 per cent if redeemed within a year of investment. This was 3 per cent, 2 per cent and 1 per cent earlier for 1, 2 and 3 years respectively.

Change: all categories of investors can now invest, instead of only a minor earlier. Lower exit load.

The fund will have an exit load of 1 per cent in redeemed within a year of investment. This was 3 per cent, 2 per cent and 1 per cent earlier for 1, 2 and 3 years respectively.

Investors of Fidelity Mutual and those L&T Mutual investors who hold funds that are to be merged will both have an option to exit their funds without any load. The last date for such offer is November 15, 2012. Those who have no objection may continue to hold the fund, without any requirement from their side.