Investors with a penchant for risk and those who do not have exposure to thematic funds can consider limited exposure (5-10% of total equity) to UTI Transportation and Logistics Fund (UTI Transportation). At its beaten down state now, the fund’s NAV is 23% lower than a year ago. That essentially means that the stocks in the portfolio have taken a hard knock. However, the fund’s asset has fallen just under 11% in the past year, suggesting it has been quietly getting inflows from contrarian investors.

UTI Transportation is a broad-based theme fund that seeks to invest in the transportation and logistics sectors. In the transportation space, it buys into stocks of companies that are a play on urban and rural consumption (cars, two-wheelers, tractors, and so on). In the investment side, it participates in sectors that are lead indicators of economic pick-up such as auto & auto components. In the logistics space, it has companies in the airline, ports, and logistics segments. Three-fourths of the portfolio is invested in auto and auto components, while about 15% is in logistics.

The fund has traditionally been volatile as it invests in cyclical sectors. Its calendar returns can swing from negative returns to even triple-digit returns. It is not suitable for risk-averse investors and those who do not have a very long-term view. For those with risk appetite, lumpsum investment at this juncture could offer an attractive entry point, with a minimum 3-5-year perspective.

UTI Transportation has been a stellar performer over several 5-year periods. Since its inception in 2004, the fund’s average annualized 5-year return, when returns were rolled daily, was a solid 21%! The Nifty 500’s 12.8% annual return over the same period, pales in comparison. However, the fund had a rough patch since mid-2018, like the rest of the market. 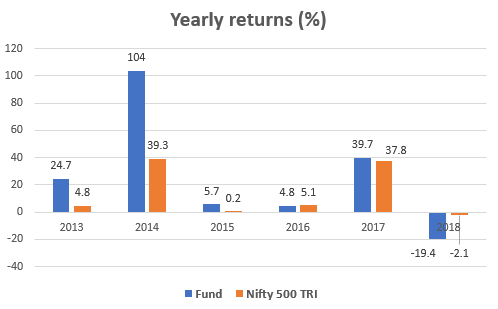 The fall in the fund’s return over the past year is not out of sync with the Nifty Auto index, which fell alike. The fall this year was primarily on account of a slowdown in auto volumes. This comes on the back of a wild run-up in stock valuations, earlier in 2017. Besides, the fund has seen a traditionally high correlation with the broad market, given its cyclical exposure. Hence, in general, it tends to fall as much or more than the broad market, during corrections.

However, over a 5-year period, the fund beat the Nifty Auto index by a convincing 9 percentage points. A combination of transportation and logistics and within that, a balanced mix of consumption and cyclical plays have helped the fund deliver well across cycles.

The auto segment witnessed a correction in 2018 after valuations stiffened in 2017. While the segment typically enjoys high valuation when backed by earnings, the industry was tested, as companies faced issues relating to volume and margins from the second half of 2018-19. For the quarter ending December 2018, excluding Tata Motors (which pulled down the entire industry into losses), the auto and auto part segments, in the Nifty 500 universe, saw a 3.5% decline in earnings over a year ago, even as sales grew 9%. Many auto ancillaries like Bharat Forge, Bosch, and Cummins, and other auto players like Bajaj Auto or Eicher Motors still managed decent earnings growth in the said quarter.

However, the leaders continued to be bothered by some challenges. Both the passenger vehicle and commercial vehicle segment experienced a downturn, albeit for different reasons. Players like Maruti Suzuki took an impact on account of currency impact (royalty payment in yen, which will become a rupee-based formula henceforth for all upcoming models) and dip in sales, despite festive season. Price increases in some models and facelifts of existing popular models are some of the measures this passenger vehicle giant has done to push sales. Commercial vehicle giants like Tata Motors, on the other hand, were more impacted by foreign unit losses than local problems.

The 2-wheeler segment though saw relatively better growth compared with the 4-wheelers.  2-wheeler segment players like Eicher Motors, Hero MotoCorp, or Bajaj Auto did well despite the overall slowdown in the auto space.

This cyclical slowdown notwithstanding, we think the stock correction in this segment can provide opportunities to enter now for the following reasons: one, the pickup in passenger vehicle would be a matter of time (as seen in several earlier cycles). Two, the initiatives showed by some 2-wheeler players and 4-wheeler players like Maruti in the electric vehicle segment may yet be unfactored by the market. Three, the steady growth in the rural segment in 2-wheeler and 4-wheeler sales (even while the urban market was down) goes well with the rural consumption story being played out in other consumer segments. Four, the commercial vehicle scene has also not been bad, and reports suggest that higher tonnage vehicle volume pick up is visible since November 2018. Also, an uptick in some of the primary vendors (ancillaries) for commercial vehicles suggests that activity is rebounding. Five, slow improvement in financing after the liquidity crisis in the NBFC space will likely result in improved sales in 2-3 quarters.

All of the above, on the back of a strong correction in stocks in these segments, make this portfolio a value pick. Almost all of the auto stocks in the UTI Transportation portfolio are trading far lower than their price-earnings ratio of a year ago. While we need to factor a likely sedate earnings growth next quarter as well, a reversal in the next 2-3 quarters appears more probable, give the signs in the auto ancillary space.

UTI Transportation has been steadily holding most of its stocks while selectively accumulating stocks such as Mahindra & Mahindra, Bajaj Auto, Eicher Motors, Bharat Forge, and Motherson Sumi in 2018. All of these have shown improvement in fundamentals as well. Tata Motors, which is among its top three picks, is the only one bogged down by earnings pain from foreign units.

Risks to the fund could come in the form of election results and any probable correction in cyclical stocks if there is no continuity in governance. In such an event, a further correction may slightly delay stock recovery.

Invest in UTI Transportation and Logistics Fund Now!
Talk to an Advisor