HDFC Small Cap is a recent addition to our Select Funds list. With a 1-year loss of 0.5%, the fund is among the few small-caps whose 1-year returns aren’t deep into the negative zone.

The Nifty Smallcap 100 index has lost 28% in the past year. From the January 2018 high, the index is down 38%. This is a far cry from the phenomenal 61% gain in 2017. Even considering that HDFC Small Cap has held up in this correction, why are we recommending a small-cap fund at this point?

We had so far refrained from stepping up small-cap recommendations even with the rally. The heady rise in small-cap stocks over 2016 and 2017 even when larger stocks were correcting and without matching underlying growth meant that the segment was overheated.

With the segment simply spoiling for a correction, it was more sensible not to go overboard on small-caps. Recoveries by small-caps after a market decline also take longer than large-caps. Liquidity risks prevailed in small-cap stocks and falls would mean that funds find it that much harder to sell off holdings without impacting returns.

We also felt that the limited exposure in this market-cap segment through multi-cap and mid-cap funds would suffice.

Now, however, the small-cap segment has more positives. First, the sharp correction in the stocks has brought prices and valuations to a more realistic zone. The average fall from the 52-week high for the Nifty Smallcap 100 index constituents is about 46%. This provides buying opportunities for funds and for investors in turn. We do not know if this is the bottom, since several broad uncertainties still prevail. But this is a good time for phased investments (or through SIPs) in small-caps.

Second, after the SEBI-imposed categorization, the small-cap space has expanded. Earlier, we used to base small-cap cut-offs on the market capitalisation of the index constituents. In December 2017, for example, stocks with a market cap of Rs 5,000 crore or lower were small-caps. With the new SEBI definition, small-caps are those with a marketcap of Rs 10,000 crore or below. This definition also means that the small-cap space will now include relatively less risky stocks – i.e., what were last year’s mid-caps are today redefined as small-caps.

Third, the changed definition reduces the scope of mid-cap funds, since they have a much smaller universe to deal with. Though mid-cap funds can include about 30% of small-cap stocks, their investible universe will still be largely restricted to 150 stocks.

In a nutshell, the correction in the segment has brought some rationality to prices and the new definition of the segment means that small-cap funds have greater performance potential now than other fund categories and with marginally lower risk than before.

In this space, HDFC Small Cap is a good option. The fund requires a high risk appetite and a long-term horizon of 5 years or more, since small-caps can take time from now to recover and deliver.

HDFC Small Cap was acquired from Morgan Stanley in 2014. The fund under the earlier management was a multi-cap fund. It was then repositioned into a mid-and-smallcap fund and further as a small-cap fund in end-2016. Therefore, the fund’s relevant performance is just since mid-2014.

In this period, the fund has been a middle-of-the-road performer. Transitioning of the portfolio into a mid-cap fund could have weighed on returns. Against small-cap peers, the fund began picking up performance from early 2017 onwards. One, the fund had time to gain from its repositioning.

Two, it cut back on portfolio drags. Pharma stocks, for example, made up the highest sector weight for much of 2016. The fund then exited most of these, including IPCA Labs, Alkem Labs, Cadila Healthcare, Glenmark Pharma and such which had been weighing on returns. The portfolio’s stock exits were much more from mid to end 2016 than in other periods.

It added NBFC and banking stocks such as City Union Bank and Indian Bank which returned well. Similar pay-offs were in auto ancillary additions, including Balkrishna Industries and Swaraj Engines and niche engineering and capital goods stocks. Sundaram Fasteners, Kalpataru Transmission, LG Balakrishnan were all strong 2017 performers. This helped the fund move slowly up the small-cap chart, going from a third-quartile performer at the start to 2016 to the top quartile by the end of 2017.

The fund continues to be in the top quartile. Apart from the performance turnaround, profit booking in several stocks protected the fund once the correction firmly set in. For example, gains made in stocks such as Balkrishna Industries, City Union Bank, Avanti Feeds, Dilip Buildcon and IFB were locked into within the first few months of this year. Additions in software and some pharma stocks, the lone gainers in this year, also helped.

HDFC Small Cap has held up to 20% of its portfolio in cash since the start of this year, both on account of strong inflows and profit-booking. The high cash position gives the fund the means to pick up beaten down stocks without affecting returns. Both factors are unique to this fund. Peers do not have cash positions to give them firing power; selling off stocks now would further pressure returns.

For this reason, HDFC Small Cap appears to be in a better spot to capture recovery compared to other small-cap funds. HDFC Small Cap has already averaged out several of its stocks in the past few months and has picked up new ones. 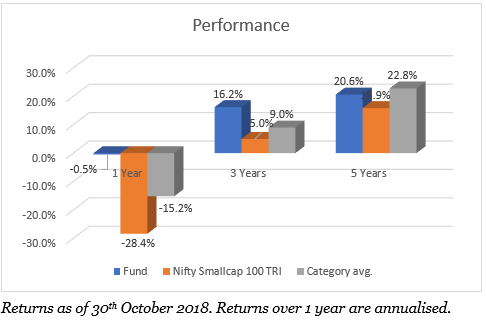 The past few years do not lend to observing downside containment. However, considering all 1-month periods since 2014 where the Nifty Smallcap 100 TRI has dropped, HDFC Small Cap contains losses better than the average for the category. Peers such as Reliance Smallcap and DSP Smallcap fell more. HDFC Smallcap is also above average on risk-adjusted returns and is less volatile as well.

The fund tends towards a buy-and-hold approach and keeps its portfolio churn low compared to peers such as Reliance Small Cap. It looks for stocks with lower valuations and which are niche players or leaders in their markets. The fund is slightly less aggressive than peers, holding a slightly lower share of small-cap stocks than DSP Smallcap, Reliance Smallcap or SBI Smallcap. Its marketcap break-up is similar to Franklin India Smaller Companies. 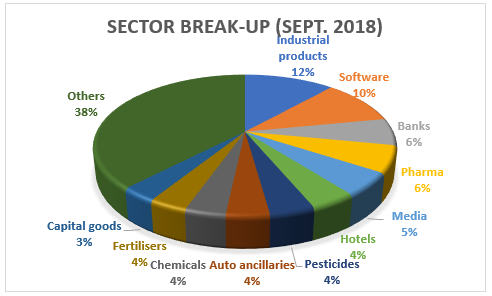 It holds a large portfolio of around 50-70 stocks with low individual stock weights. Top holdings are not concentrated, which mitigates the risk of sharp losses in stocks. The top ten stocks generally making up a third or less of the portfolio. The fund’s portfolio shares very little overlap with either the Nifty Smallcap 100 or peer funds.

The fund has an AUM of Rs 4,948 crore. Chirag Setalvad is the fund’s manager.