Why: Stable long-term performer, moving across the market to capture opportunities

Who: Moderate to high-risk investors with a 5-year timeframe

With only a few months left to the end of this fiscal, you will be looking for avenues to save on taxes. Axis Long Term Equity, an equity-linked savings scheme, is a good choice here. ELSS or tax-saving mutual funds are a great way to save on taxes, given their superior return potential and better liquidity.

Axis Long-Term Equity’s average rolling 5-year return since its inception in 2009 is 22%. The least it has delivered in this period is 17%. This is well above PPF rates, which averaged 8.3% since 2009. Tax-saving funds have the capacity to deliver more than the usual PPF/ bank FD/ NSC options thanks to their equity nature.

Axis Long Term Equity moves across market capitalisations to make the most of available opportunities. The fund is able to beat the broad-market gauge Nifty 500 TRI more than 90% of the time on a rolling 3-year basis since its inception. The fund hasn’t delivered a loss in any 3-year period.

Axis Long Term Equity (Axis LTE) does not share much overlap with the Nifty 500, the broad market gauge. It moves across market capitalisations and can take significant mid-cap exposure. Over the past two years, the fund has held around 65-70% in large-cap stocks. It can take tactical cash calls if needed.

The fund tends to follow a stock-specific and not a sector-based call. It follows a buy-and-hold approach for the most part, with several stocks in its current portfolio present for at least 3 years. It is growth-oriented in stock selections. It adopts a more concentrated approach with the top 10 holdings making up about half the portfolio. Individual stock weights are often around 8%.

This strategy has helped it post strong gains over this year, via stocks such as HDFC Bank, TCS, Kotak Mahindra Bank, and Pidilite Industries. Portfolio weights to these stocks were around 5-8%. Until the recent correction, high weighted stocks such as Bajaj Finance and Gruh Finance propped up returns.

These heavyweights played a key role in compensating for the market correction that pulled down other portfolio constituents; Motherson Sumi Systems, Maruti Suzuki, and Sun Pharma, for example feature quite prominently in the portfolio. What also helped was smaller exposures to performers such as Avenue Supermart, Info Edge, Divis Labs, and L&T. Profit booking in other stocks and exiting of underperformers helped too.

Such a strategy of high concentration in some stocks and steady profit booking can work well in any market. However, it does require a slightly higher risk appetite, since a few wrong or early calls can work against returns. For instance, while TCS propped up returns now, it had weighed on over 2016 and 2017. Sun Pharma was another heavyweight that dragged. This, along with smaller exposures to MindTree, Tech Mahindra and Nestle pushed down fund performance over mid-2016 to mid-2017.

Axis LTE is among the few funds today that are holding above their benchmarks in the 1-year period. While the fund’s benchmark is the Nifty 200 TRI index, the Nifty 500 TRI is a better index given the fund’s tendency to move across market capitalisations.

Axis LTE is able to beat both this index and the ELSS category average over 90% of the time on a rolling 3-year basis. On a rolling 1-year basis though, the fund does not have as good a record owing to a lag from mid-2016 to late 2017. As explained above, the underperformance was on account of top holdings doing poorly. The fund has since recovered from this slump and is improving its consistency against the index. 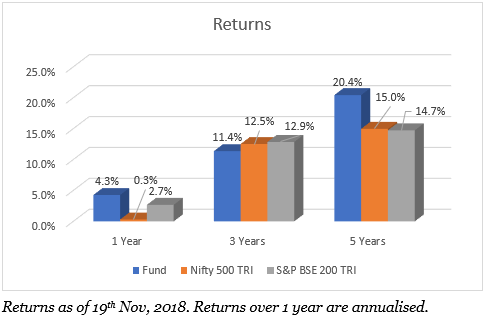 The fund is more volatile than peers, both due to its aggressive strategy and of late, the portfolio churn it undertook to improve returns. It is still able to deliver above-average risk-adjusted returns. It is able to limit losses during market corrections and is able to participate in market rallies quite well, too. 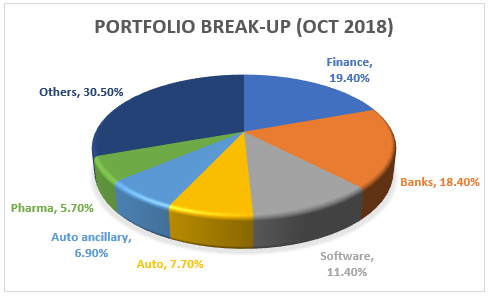 Axis LTE has used the market correction to add to holdings in quality stocks such as Maruti Suzuki and Eicher Motors. Though exposure to the banking and financial services sector has dropped in the past two months, it still accounts for a chunk of the portfolio. Chiefly, this exposure is through the likes of HDFC Bank, HDFC, Kotak Mahindra Bank, Bajaj Finance, Sundaram Finance, and Bandhan Bank.

Pharma and software are other sectors where the fund has increased allocations. Consumer stocks have also seen an uptick in exposure. It has slightly stepped up exposure to some cyclical stocks. However, the fund is oriented more towards the consumer and defensive space rather than cyclical.

Investments in Axis LTE will be locked in for 3 years. However, being an equity fund, a longer 5-year holding period would be ideal. The fund suits moderate to high-risk investors since its strategy is slightly aggressive. Axis LTE has an AUM of Rs 16,467 crore. Jinesh Gopani is its longtime manager.