Funds are cautiously betting on midcaps

Since early 2018, midcaps and smallcaps have been generally bound southward. This run of falling prices comes after a record rally and pricey valuations, which had funds turning wary of the segment. But are funds now finding opportunities here? One way to track this is to look at market cap allocations of funds that can move across the marketcap range. If funds are buying into mid-caps and small-caps, it shows up in their market cap allocations over the months. By this measure, funds still prefer the stability of large-caps. But they are starting to turn optimistic on midcap stocks, with allocations here creeping higher. However, they are yet to increase buying in small-caps. Here’s more.

The Nifty Midcap 100 has shed 16% since February last year while the Nifty Smallcap 100 tanked 30%. While there was some recovery during the election-driven rally, the two indices are still lower than their levels a year, six months, or even 3 months ago.

Funds had been waiting for cheaper stock prices, especially during the breakneck 2017 rally. Earlier corrections in the 2014-2017 period had been short-lived. With the sustained mid-cap and small-cap correction over the past year and a half, funds are starting to turn positive.

Large-and-midcap funds, multicap funds, value, focused, and dividend yield funds all fall under the bucket of funds that move across market caps. For these funds, mid-cap allocations have inched up over the past six months. The shift to midcaps has also been more in large-and-midcap funds than others, given that they are more aggressive by nature.

For large-and-midcap funds, the average share of mid-cap stocks rose to 35.6% in May 2019 (latest available portfolio data) from 32% in December 2018. Half the category’s funds added to mid-caps in this period. A few turned extremely aggressive, with their mid-cap allocation jumping by 5-8 percentage points. 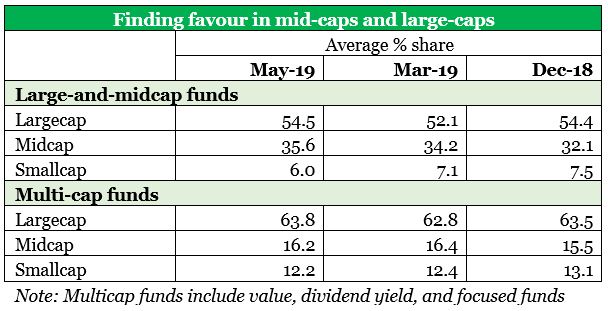 Similarly, among multi-cap, value, dividend yield and focused funds, just under half the universe added to mid-cap allocations. The average of mid-cap allocations of these funds crept up to 16.2% in May 2019 from 15.5% in December last year. These funds generally are more conservative than large-and-midcap funds, tending to hold higher large-cap allocations.

The focused category saw several funds adding significantly to their holdings; given that such funds take concentrated exposure, picking up few stocks can influence the proportion. Value funds, though, appear to be a mixed bunch. Some added to mid-caps by a good margin even as others reduced exposure with equal fervour.

However, funds are generally waiting it out with small-cap stocks. This could be because small-cap stocks have fallen much more sharply and have higher associated risks. Between mid-caps and small-caps, risk levels in the latter are far higher. So, while funds may be willing to dip into higher-risk waters now, mid-caps would offer the better route initially.