Funds with a clear strategy in place and a sustained ability to generate excess returns over their benchmark will be the ones that may survive the structural changes that the mutual fund industry is undergoing. At FundsIndia, ahead of any such change in the industry, we have been identifying funds with sustained performance and focused strategies, aside of quantitative metrics that we use to assess performance. These funds find a place in our Select Funds list.

One such fund in our recommended list is Invesco India Growth.

Invesco India Growth is a large-cap oriented fund. It sports a 5-year annualised return of 18.8% – a good 5.5 percentage points over its benchmark S&P BSE 100.

The fund would probably qualify (based on its current market cap) as a large and mid-cap fund if the new categorisation norms provided by SEBI are applied now. Its sister fund Invesco India Business Leaders has a higher exposure to large-cap stocks than this fund.

Invesco India Growth has a somewhat concentrated approach to stocks. In terms of sectors, its mandate allows it to go 50% underweight or 150% overweight its benchmark sector holdings. Deft management of stock and sector weights and tactical stock picks has helped this fund perform well even in market phases that lacked direction.

Invesco India Growth is not a chart topper. Since, its launch in 2008, it did not beat its category average in rallying markets until 2013. But what it got right was the ability to contain declines better than peers in the steep market falls of 2008 and 2011. From 2013 though, the fund steadily beat peers; even generating positive returns or remaining flat in years (2013 and 2015) when peers fell.

Containing declines well has been a steady characteristic of this fund. However, in recent years, it has become conspicuous for its outperformance as well. 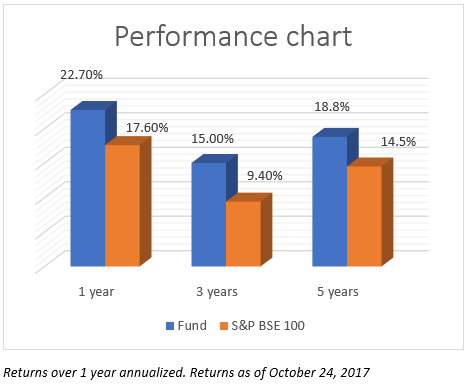 When its returns were rolled daily over 1-year time frames (in the past 3 years), it beat the large-cap fund category (we define large cap as those stocks with a market cap of over Rs 20,000 crore) 73% of the times. That is higher than some large-cap funds such as ICICI Pru Focused Bluechip Equity and better than long-standing popular funds from the HDFC stable such as HDFC Equity and HDFC Top 200. A longer period of rolling 3-year returns throws a solid 97% outperformance. This speaks of consistency in performance.

While the fund’s volatility is not as low as pure large-cap funds such as Franklin India Bluechip, it makes it up with adequate risk-adjusted returns. Its Sharpe Ratio is among the top 5 in the category. Since we talk of the fund containing downsides better, we also looked at the fund’s Sortino Ratio, to measure returns when adjusted for downside deviation (simply called bad risk). In this, the fund is next only to Mirae Asset India Opportunities in delivering better returns adjusted for such risk.

What makes Invesco India Growth’s performance admirable is that even with such a concentrated approach, it has managed to contain downsides and deliver superior risk-adjusted returns. That calls for a very sound approach to getting its weights right on stocks and sectors.

A point-to-point comparison of sector or stock weights may not reveal much as to what the fund did. What it did between periods helps understand how it generated returns. For example, over the course of the year, in the banking and financial space, it increased weight from 30% to 36%. But the changes it did within its stocks were as follows: It exited Axis Bank and increased exposure to ICICI Bank; it pruned HDFC Bank and IndusInd Bank just to keep weights within limits (and book profits) and instead added L&T Finance Holdings and Cholamandalam Investment & Finance Company. This kind of constant tweaking of weights not only ensured that some profit was booked when it was ripe but also helped deploy money in new opportunities at reasonable valuations. This way, the fund mixes both growth and value strategies well. 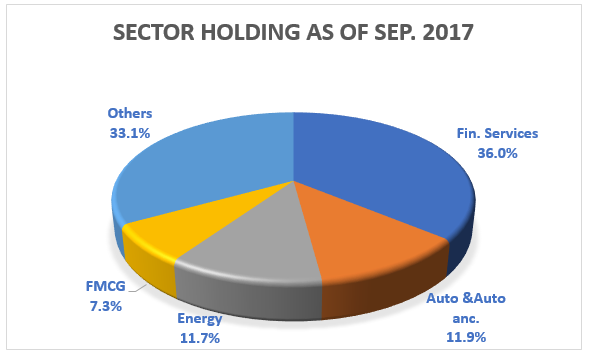 In terms of stock picking too, the fund’s ability to enter and exit stocks at the right time is visible in terms of returns generated through such stocks. Some of its picks such as Heritage Foods (2016) and Coramandel International (2015) helped prop returns. The fund’s exit of AIA Engineering or Ashoka Buildcon or tactical entry and exit of Bharti Airtel were all quite timely as it caught them at peak periods and booked out. Profit booking is a vital tool to ensure returns are not lost in translation (profit lost between holding and selling stocks) especially in mid-sized companies.

The fund does not also shy away from newbies such as CDSL or ICICI Lombard General Insurance Company.

Invesco India Growth has a compact portfolio of Rs 211 crore. The fund was managed by Amit Ganatra and Vetri Subramaniam earlier. With the exit of Vetri in January 2017, Taher Badshah (earlier with Motilal Oswal) has joined Amit in managing this fund.