FundsIndia explains: What are absolute returns

“My investment in that Bombay house grew to Rs.85 lakhs from when I bought it back in 2000 for just Rs.25 lakhs. My investment has tripled!” That’s a declaration that you would have certainly heard. In mutual funds, the statement “Returns over one year are annualized” is always heard.

So what’s the difference? The real estate statement considers absolute returns, whereas the mutual fund statement talks of returns on a per-annum basis. Here is what absolute returns are, their usage and limitations.

Absolute return is the simplest return metric that is used to quantify how much gain or loss you have made from an investment. It simply tells you how much money you have made or lost as a percentage of the money you invested over a given period of time.

The formula to calculate absolute returns :

For example, if you had invested Rs.3500 in a fund and redeemed when the value was Rs. 4100, you would have made a gain of Rs.600, which is 17.14% of the amount invested. This is the absolute return you got from the investment.

Absolute returns are rarely used in measuring performance. The metric is used for returns where the investment period is less than one year. Or, it is used when comparing performance for a common and clearly defined period – say, the market peak of January 2008 to the bottom of March 2009. Otherwise, the absolute return metric is severely limited.

Why we don’t use absolute returns

Instead of absolute returns, the measure we use is CAGR. CAGR, or compounded annual growth rate, is used to get the per-annum returns. CAGR is the uniform rate at which your investment grew annually taking into account its compounding effect.

The scope of using absolute return metric to evaluate performance is limited as it does not take into account the time period of investment and its compounding effect. For example, if Fund A gave you 17% return over 2 years and Fund B gave you 17% returns over 1 year, both of them would rank the same if you take the absolute return metric when clearly, one fund has taken longer to deliver the same returns.

It does not allow comparison across asset classes

While comparing across asset classes, it’s important to use the same return measure to get the correct picture. The predominantly used return metric for asset classes differ. If you take asset classes like real estate or gold, the returns are usually discussed in terms of absolute values. It’s simply, as we said earlier, taken as the difference between the purchase price and sale, ignoring the time period in between. So in the real estate example we started out with, the return would be 240%. Individual stock returns are also often looked at as absolute returns – HDFC Bank, for example is up 176% between October 2013 and October 2017. 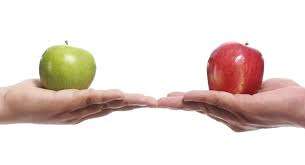 Further, because absolute figures are usually high, it gives a false impression of the worth of that investment compared to others. Take the real estate example. The investment in Bombay house which fetched a gain of Rs.60 lakhs does sound grand, and an absolute return of 240% sounds even better. But when we look at the same gains in CAGR terms, it works out to be a modest 8.17%.

Only once you work out the annualised return will you be able to compare. The 8.17% is very modest and not much more than an FD. In the fund example taken before, if Fund A had earned you 17% in 2 years, your per annum return would be around 8% on a compounded basis as opposed to Fund B’s 17% return in a single year. Thus, you would have missed the stark difference in performance if you were comparing a fund on the absolute return metric. Annualised figures also make it easier to measure returns after accounting for inflation.

While comparing across asset classes, you get a distorted picture when the comparison is made on different metrics. And for that reason, we use CAGR as an uniform metric when we evaluate products from different asset classes across different periods. Absolute returns are limited in their applicability.

4 thoughts on “FundsIndia explains: What are absolute returns”