First-time investors in mutual funds, as well as investors looking for debt funds with some kicker returns from equity can invest in Monthly Income Plans (MIPs). These are hybrid funds that put the majority of their portfolio into debt and have some allocation to equity to improve overall returns. With both the debt and equity market in limbo, and both waiting for cues on interest rates and economic growth to recover, MIPs are a good bet for those with low risk tolerance.

ICICI Prudential MIP 25 is a good option here, though it requires a slightly higher risk appetite than other MIPs. The higher risk appetite is on account of its aggressive calls on debt based on interest rate cycles and its higher equity exposure. It also calls for around a three-year horizon.

With a three-year return of 11 per cent, the fund is a top performer. In the five-year period as well, it ranks in the top quartile of funds in its category and bettered its benchmark CRISIL MIP Blended Index. This outperformance is also consistent – since its inception in 2004, the fund has beaten its benchmark close to 90 per cent of the time, when rolling three-year returns.

Among MIPs, ICICI Pru MIP 25 takes higher equity calls up to a maximum of 30 per cent. Only Birla Sun Life MIP II Wealth 25 and Axis Income Saver take similar equity exposures. Other MIPs usually cap the equity holding at 25 per cent. This makes these funds slightly more volatile than the category average. 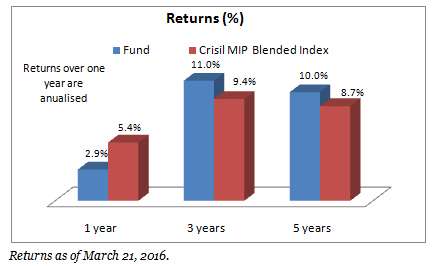 But where ICICI Pru MIP 25 scores is in its risk-adjusted returns, which hold above the category average. This indicates that for the higher risk it takes, the fund delivers commensurate returns. Since its inception, it has never seen a three-year period in which it has suffered losses, i.e., as an investor, you would not have lost money on this fund in the past, if you held it for the required time period of at least three years. The Birla fund has a much higher volatility and ranks lower on consistency when compared to ICICI Pru MIP 25.

In the past one year, ICICI Pru MIP 25 has not matched its benchmark returns or its category average for a few reasons. One, in the past month it had to mark down its exposure (3 per cent) to the debt instrument of JSPL by 25 per cent as a result of the instrument being downgraded. However, the fund has not seen any default in interest and continues to hold the instrument. Given the mark down, we believe that the fund may not suffer further loses and may recoup the same once the instrument matures.

Two, the fund significantly upped holding in government securities over 2015 as yields remained attractive. From a quarter of the portfolio, gilts now form 60 per cent. This allocation is far above that of the benchmark and most peers. The lack of a gilt rally in 2015, as expected, put a dampener on one-year returns. A gilt rally could work out now, however, as yields align with lower interest rates and as government borrowing stays in check.

Three, as a result of the hike in gilts, its holding in higher-yielding corporate debt is lower. The limited exposure, though, is primarily in riskier AA rated securities, which can bring in higher returns. This is also why the fund’s current yield-to-maturity is slightly below many peers at 8.5 per cent, besides holding 7 per cent of its portfolio in inflation-indexed bonds which will now yield lower as inflation has corrected.

The fund shifts between duration and accrual strategies. Currently, it has a duration call. Average maturity and modified duration has been on the higher side over the past year owing to the gilt exposure. But between 2010 to 2014, the fund had a short duration of less than 3 years as higher interest rates made corporate debt far more attractive.

Equity exposure was higher in 2014, scaled down by mid-2015, and increased again towards the end of last year as valuations turned cheaper. It now holds it at 21 per cent. Equity holdings are primarily in stable large-cap stocks, with only minor holdings in mid-cap stocks. In its current portfolio, apart from banks, defensive pharmaceuticals and the consumer-oriented auto and auto ancillaries form the top sector holdings.

Over the long term, ICICI Pru MIP 25 has comfortably beaten both category average and benchmark. Its track record of consistency in outperformance, whether over the short term or long term, is unmatched by peers. Its average three-year rolling returns since its inception is around 9.7 per cent, well above the benchmark’s 8.03 per cent average. The fund is managed by Manish Banthia and Rajat Chandak, and has an AUM of Rs. 1,213 crore. ICICI Pru MIP 25 is a debt-oriented fund and will, therefore, be taxed like any other debt fund.