Synopsis: Markets (and economists) are reacting to a slowdown in GDP growth for the June 2017 quarter. The call for a fiscal stimulus to revive the economy is also growing loud. The question is whether a large fiscal stimulus will shake the economic stability that has been painstakingly built. In this article, we

Any substantial stock market correction as a reaction to the slowdown will do you good and prevent further froth in the market. It will also actually provide opportunities to invest well.

Distress calls by a large section of the media and by economists on feeble GDP growth of 5.7% for the quarter ending June 2017 has spilled over into stock markets. It has also prompted the Government to wear its thinking cap to come up with ‘stimulus’ packages for the economy. No surprise there – who would be more worried about a slowing economy than a ruling Government that is going into elections in less than 2 years!

Let’s pause for a moment to review the economic journey over the past few years. From double-digit inflation, high current account (CAD) and fiscal deficit and a currency that was losing ground 4 years ago, India became a haven of stability in 2016-17. Falling oil prices contributed to a lower CAD. Subsidies were scaled back. There was a prudent use of minimum support prices for agricultural commodities along with a management of food imports and an improved supply chain. Monetary policy shifted to maintaining a target rate of inflation.

In the wake of all this, along with consumer price inflation contained at less than 5% for over 3 years now, the stability that a steady inflation brings to the economy is visible. A stable currency, lower interest rates, higher FDI and higher FPI and DII money all followed stability. And yet, here we are with a quarterly GDP growth at a 13-quarter low. Why?

Whether it was poor monsoons in FY-16, structural transformations such as Aadhar push, the bankruptcy law, the Real Estate (Regulation & Development) Act 2016, demonetisation, or GST, to name just a few, the economy has had to deal with continuous jolts over the past several quarters. Cumulatively taken, these are among the reasons that are stalling growth. And, yes, the government can be blamed for executing these without sufficient measures to tackle their impact. However, these are more transitional than long-term issues that will, hopefully, fade over time and bring in the benefits they are supposed to.

But were these the only reasons for the slowdown? Not really – it appears that slowdown had already started before the impact of these major changes could be felt.

First, let us take the supply side of the economy measured through GVA. GVA, or gross value added, is the total of output and income in the economy. It does not exclude subsidies and does not include taxes. That means it is a better gauge of real production in the economy, without being distorted by taxes and subsidies, like GDP. India adopted GVA a couple of years ago, to represent the supply side (production) of the economy. This number at 5.6% for the quarter ending June-17 (over June 2016) was the same as March-17 quarter. But let’s look at core GVA. The core GVA, stripped of agriculture and government spending, captures the private sector’s production. The graph below will tell you that the slowdown there started right after March 2016. 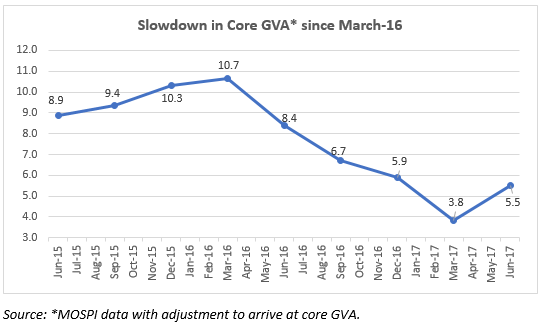 Second, let us take the demand side of the GDP. India’s 9% GDP growth periods in the pre-2008 era was fuelled by double-digit export growth. If we take the last 12 quarters average exports FELL by 0.5%. For a demand-side factor that contributes over 20% to the GDP, a growth at this rate can only pull down the economy.

Still the growth engine held until 2015-16. However, the fact is the 2015-16 GDP was substantially boosted by oil’s freefall. India ran out of that luck with imports picking up once again.

So, what kept the growth engine going in 2016-17? It was government spending of course! The average growth of government spending for 16 quarters ending FY-16 was 4%. For the next 4 quarters of FY-17, the average stood at 21.5%! That has now dropped to 17.2%. What does that mean? The government has been spending and spending enough – and that is indeed fiscal in nature.  Whether the government should once again raise this rate of spending at the cost of expanding the deficit, rocking rates, rupee and inflation is the big question.

The above data tells us that the slowdown has occurred despite government spending. That means the populist demand of large-scale spending to drive growth may not even yield results – at least not in the short term. More, such spending may rock the boat of stability, which has been hard earned over several years through the work of policymakers.

This is more so with tax revenues expected to be lower than budgeted (because of operational issues with GST) and non-tax revenues (divestments and dividends) remaining uncertain. Reviving investment spending by the private sector is also a tall order when capacity utilisation is at a little over 70% and no corporate entity would want to invest in a phase of structural shifts (like GST).

If we remove all the panic created by the slowdown and look at the numbers, they are not terrible. If we take electricity and other utilities, construction, trade, financial, and other services, these have remained strong, or are showing signs of revival (see table below). These components account for 54% of the GVA and can support growth.

The solution, as some economists also opine, may lie in reviving demand of products both locally and through exports. The government has already started announcing relief measures for exporters, especially on the tax front. Similar relief may also be warranted for small and medium enterprises, even if temporarily.

Similarly, targeted spending that can create employment and boost consumption would also help. On this front, the suggestions from former Chief Economic Advisor Kaushik Basu and a few other economists to spend in social sectors of healthcare and education can result in employment as well as boost income, especially in rural areas.  A marginal digression in fiscal spending may be tolerated in these areas given that the probability of spurring consumption demand is higher. A report by Kotak Institutional Securities based on actual figures in 2015 and estimates by UN and other social development focused organisations talk of at least 20 million government jobs in social sectors of education (teachers), healthcare (nurses and doctors) and public security (police) alone, in the next 5 years. Even a small boost on this count can lead to a sharp pickup in consumption.

Another area that has a ripple effect on the economy is housing. Towards this front, interest rates on home loan have fallen from 10.2% to 8.6% (between 2015 and now) now causing at least a 10% lower EMI. The Centre has also recently announced extending the Interest Subsidy Scheme (under Pradhan Mantri Awas Yojana (Urban) on home loans for middle-income groups by another 15 months; subsidy of about Rs 2.6 lakh will now be available until March 2019. These factors with stable to marginally lower prices of houses prevailing now can boost the sector. Further spending on mass housing schemes by the government could also help.

In other words, selective spending to revive consumption/export demand and not large-scale spending could be the way forward without impacting economic stability. Any other populist measures, in our opinion, would not only be imprudent but also neutralise any future benefits from all the structural reforms built over the last 3 years.

What if markets react?

Panic is the best friend for your investments. Markets have reacted and may continue to react. We have been hinting that this market is being driven by liquidity and not earnings growth. At 25 times trailing P/E for the Nifty, FPIs have been pulling out for more attractively valued emerging markets (valued at 15-20 times P/E) although domestic investors continue to invest. The FPI pull out, coupled with earnings disappointment already underway, will simply afford an opportunity for domestic investors to average stocks of companies with sound financials and business. For example, with consumption slowing, the consumption proxy plays picked by funds could well take a beating. This may provide good entry points into such stocks. Hence instead of panicking, gear up for volatility over the next couple of quarters.

If you invested any time after June 2017, you may probably be in the red by the end of this calendar year. It simply means you have bargaining opportunities. Instead of panicking, run systematic transfer plans or value averaging plans to tide over the volatility. Get in touch with your advisors to help you average. We will also sound you off on good opportunities that corrections can provide.