GST and its possible impact on sectors

The stock market may have reacted in a lukewarm manner to the amendment of the Constitution (in Rajya Sabha) to introduce GST as a bill. This is because GST implementation can have a mixed impact across sectors. A direct impact would of course be an increase or decrease in the rate of tax compared with what each sector is currently paying. But a bigger, although more indirect impact would be the economies coming from a more efficient supply chain management. The latter would be the game changer in terms of which sectors make the most of such efficiencies.

Let’s look at the possible impact of GST in some sectors.

Auto
In the case of two wheelers, if the current taxes at 24% fall to 18%, manufacturers will likely pass on at least a part of such reduction to customers. This could spur demand for two wheelers and entry level passenger vehicles thus increasing sales volume for companies. However, there could be a marginally negative impact on the commercial vehicle space. Since GST is expected to ease movement of goods within the country and remove logistical bottle necks it may increase commercial vehicle fleet productivity thereby reducing the need for adding too many vehicles in the fleet.

Consumer goods
A big positive that the consumer segment will experience is the input credit on services that will now be available. This can aid margin expansion for companies. Currently retailers incur about 10% to 15% of their operating expenditure on rent on which service tax is levied. The retailers do not currently avail input credit on such service tax as they collect only VAT.

Tobacco and precious metals will be impacted negatively; as an expected increase in price of the final product will be borne by the consumer, which can result in lower demand.

Logistics
GST is expected to create a single market for the whole nation. All the logistic companies can now focus on creating regional hubs rather than maintaining warehouses in each state to comply with the local taxes.
The logistics industry can therefore be expected to become more efficient with better usage of warehouses whilst bringing in higher level of automation.

Transit time of goods between states is expected to reduce significantly as interstate check points where the freights are stalled to apply appropriate duty will be removed. This will also help bring down the cost of logistics companies. Here again, it will be the organised players who will be one up in terms of gaining from the efficiencies arising from GST implementation. 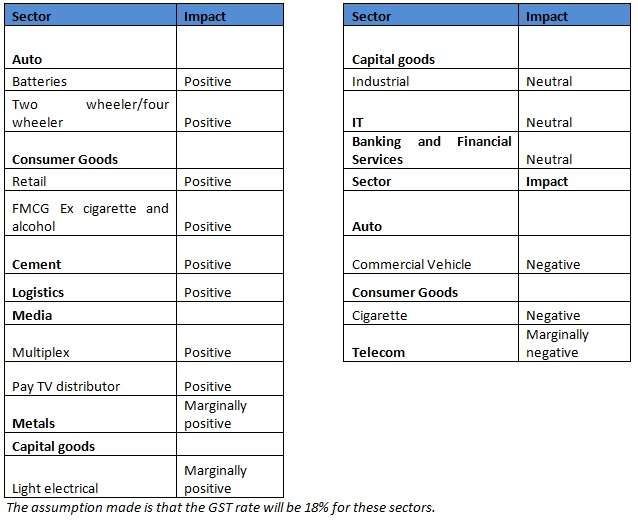 Capital goods
Lower taxes of 18% from the current 29-30% will help in the reduction of prices of the final output in the light electrical sector, leading to volume growth. In the industrial capital goods segment, lower cost of capex (as engineering goods become cheaper) can be a driving factor to revive investments by companies, provided a low interest rate scenario prevails when GST is implemented.

Cement
A reduction in the tax rate from the current 23-25% to 18% can lead to a benefit of Rs 300-500/ton.
The cement sector currently operates on a carry and forward mechanism through agents to save on central sales tax to establish reach. Carry and forward agents store the final inventory in their warehouses and transport it to the required location. With the implementation of GST, CST will be subsumed and the entire distribution will happen only on actual business requirement resulting in savings through lower inventory carrying and distribution cost.

Media
Multiplexes pay a multitude of taxes in the form of entertainment tax, service tax and VAT. All these will now be subsumed if GST is implemented. Overall, this could work positively for the sector despite an increase in tax on advertising revenue (where service tax thus far paid will see an increase).
DTH operators can benefit from lower effective tax rates as state levied entertainment tax and service tax will get subsumed.

Metals
The demand for metal products is slightly price inelastic; meaning an increase or decrease in prices of metal may not adversely affect the demand. Demand in this space is more driven by capex plan and production capacity levels in various sectors. The tax burden for this sector can raise from the current 16% to 18%, but may not have much impact.
The benefit for this sector will accrue from the various taxes such as entry tax, octroi and CST on their inputs getting subsumed.

Telecom
Increasing tax rates from 15% to 18% will be mildly negative for the sector. This would be passed on fully to the post paid subscribers . While in the case of pre paid, if the impact is not passed on immediately, it may affect the realisation per minute in the medium term for companies.Also, it is noteworthy that the government wants to ensure that the end consumer is not overwhelmingly burdened with tax hikes. To this extent, sectors that have higher rates may find it hard to pass it on to the consumer immediately.

Banking and financial services
Fee based services will now attract tax at 18% instead of 15% currently. This will result in increase in loan processing cost, insurance premium, and credit card charges as the banks pass it on to the consumers. Hence while it may be neutral for the sector, consumers may feel the pinch here.

Information technology
The Indian IT industry derives 74% of its revenues from exports which is currently exempt from service tax. This will continue under GST as well. Of the total revenue negligible amount of it is derived from hardware sales and hence its impact will be neutral.