What should you do with your SIP?

The past few weeks have been tough for investors globally and in India. Equity markets are down close to 25% from their recent highs.

The gradual decline in the markets which started in late Jan, gathering pace in the last couple of weeks will have impacted your investment return.

So, if you have been diligently doing SIPs in mutual funds, you would have found that your returns have been negative or at best minuscule. The table below shows SIP returns for the Nifty 500 TRI.

On seeing the returns –

Your reaction – disappointment and anger – at having invested in mutual funds.

Your likely immediate action – stop all SIPs and possibly withdraw your existing investments.

That’s a knee-jerk reaction and not in your best interest.

One, with the steep decline in the market, your investment value has already taken a hit. Exiting now will do nothing to recoup the lost value of your investment and will only mean that you will be selling your mutual fund units at a loss.

Two, if you believe the market will recover (as it always has historically) and do well long-term, then staying invested will ensure that your investment value recovers and you end up with a satisfactory return.

While you will agree with the first point, you may still be skeptical of the second point. So, here’s some data to show that in a bad market year, you are likely to be better off staying invested and riding through it instead of exiting in between.

The current market mayhem may seem unbearable, but it’s not the first (and definitely not the last) time that investors have been left disappointed despite staying invested for a few years.

There have been other such years (table below) in the past too. Our analysis covers the last 25 market years since 1995. 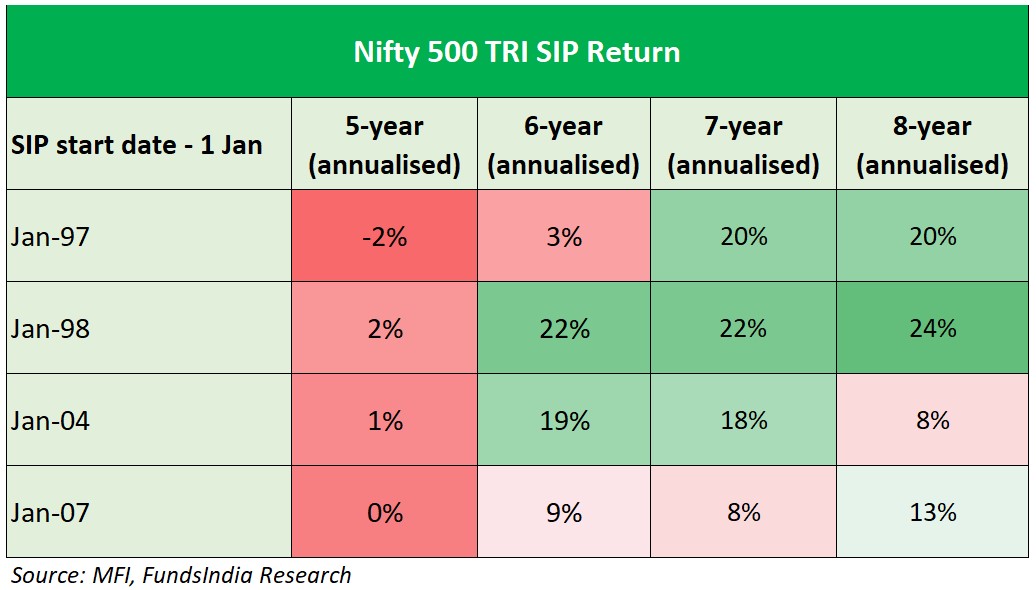 Assume you started investing in the Nifty 500 TRI in Jan-97. Then, your 5- year return by Jan-02 would have been -2%(annualised). That is, despite being invested long-term, you would have lost money.

However, if you continued with your SIPs for longer – two more years (until Jan-04) instead of cashing out in Jan-02, your returns would have been significantly better. Your 7-year SIP returns would then have been a whopping 20% (annualised).

Likewise, if you started SIPs in Jan-04, you would have ended with a 5-year return of only 1% in Jan-09. Extending your SIPs by say, one year to Jan-10 would have fetched you 19% return (annualised).

See the table below for more details.

So, how did staying invested for a few additional years help?

But, continuing with your SIPs for one additional year (until Jan10), would have boosted your annualised return to 19%. This was thanks to the 87% rise in the Nifty 500 TRI between Jan-09 and Jan-10.

All it takes is a few days

Do note, though, that the recovery was concentrated over a short three-month period – from 9 Mar to 16 Jun-09, when the index shot up 85%. That is, the recovery was quick. Also, since you continued with your SIPs at a time when the market was at a low, once the recovery started, the pick-up in returns was sharp.

So, while it may be tough to resist the urge to sell in a down-market year, investors are better off staying invested rather than exiting.

Take 2008 and 2011, for instance. Investors who exited the market in these years would have got a raw deal compared to those who remained invested until the markets recovered. Same for those exiting in 2000 and 2001. Again, waiting it out for a year or two would have paid off rather than selling off during the market fall. See the table below. 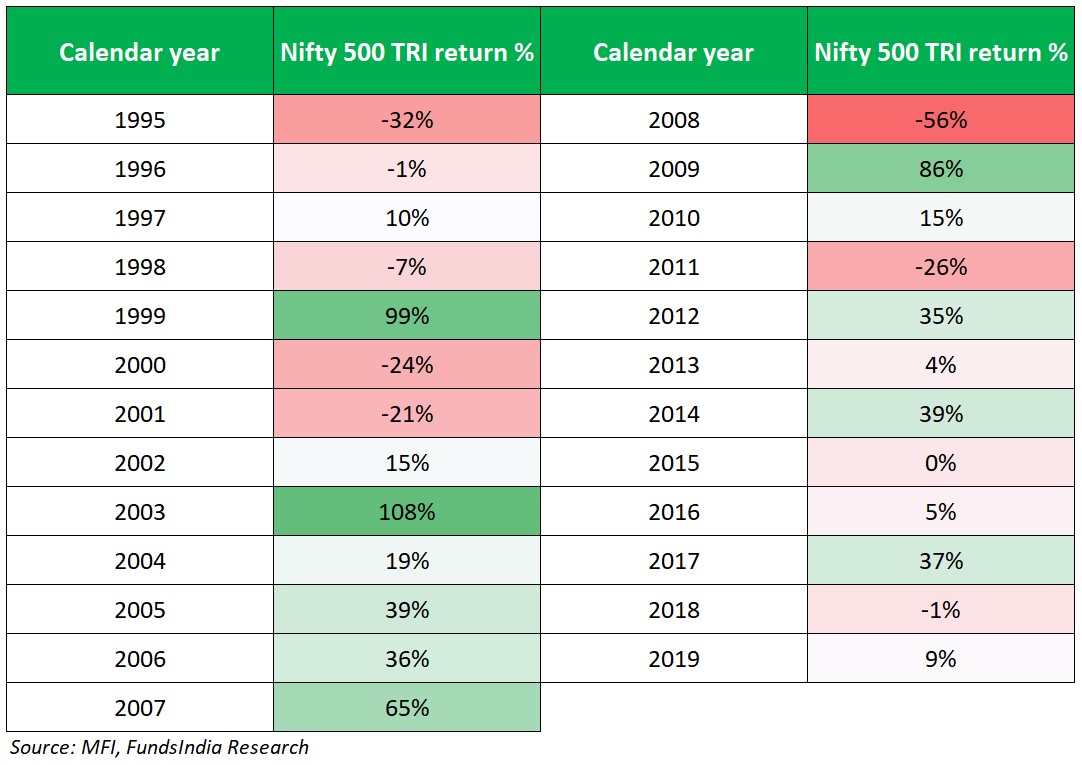 In the current year, with the Nifty 500 TRI having lost 25% until 17 Mar-20, this may turn out to be a year when staying invested and not exiting may pay off.

Sharp declines are usually followed by sharp recoveries and continuing your SIP ensures you are positioned to take full advantage of this. It is a combination of the down and the upside periods, that allows SIPs to be a successful strategy over the long run.

That brings us to the third and probably the most important reason for – why this is a bad time to stop your SIPs.  In fact, this may be a good time to raise your SIP amount.

This becomes clear when we draw an analogy with other asset classes. When are you most likely to invest in gold or real estate? When property or gold prices are falling. Isn’t it?

So, apply the same principle to your mutual fund investments.

With the markets having declined so much, your mutual fund NAVs too have fallen a lot. That is, at the current low NAVs, you are getting more mutual fund units than you would have in the past for the same investment amount.

Let’s take the example of say ICICI Pru Bluechip Fund, the biggest large cap fund. Suppose you invested Rs. 10,000 in the fund on 15 Jan-20, a market high. Then at an NAV of around Rs. 45 per unit, you would have been allotted 221 units.

By continuing with your SIPs in such times, you can bring down the average cost of your overall investment (a mix of units bought at higher NAV in the past and units bought at a lower NAV now) thereby improving your long-term returns.

Withdrawing your existing mutual fund investments or stopping your SIPs in the current market fall, may not, therefore, be the best option for an investor. This is for several reasons as highlighted earlier.

Your existing investment value has already taken a hit. Selling your existing mutual fund investment now will not restore its value and will only result in a capital loss for you.

On the other hand, staying invested gives you an opportunity to recoup the loss in your investment value and earn better returns.

Further, by continuing with SIPs (and possibly even increasing the amount) when fund NAVs have fallen, you can accumulate more units and lower your average purchase cost. This can improve your returns long-term.