The repo rate cut by RBI would send most funds hunting for opportunities in the interest rate curve. But if you wish to look at a less tapped area in the debt market for potential returns then you should probably look at credit opportunities. Birla sun Life Medium Term Plan (Birla MTP) offers such a strategy.

With a return of 9 per cent in the last three years, this fund has been in the top quartile of the performance chart of income funds. But given that its portfolio maturity has mostly been short-term since its launch so far, a comparison with short-term fund category may be more appropriate. This showcases the fund in the top three list.
More recently, its one year return of 11.3 per cent also places it in the top 10 of the income category.

Features
Birla MTP started off as a regular short-term fund three years ago but decided to seek opportunities in the credit space. Hence in March-April 2012, it hiked its exit load to 730 days (2% for exits before 365 days and 1% if redeemed between 365 to 730 days) thereby allowing it to move to the new strategy. While this did lead to some institutional money exiting, the fund has grown its asset size since.

How does increasing exit load help? One, the fund’s core portfolio (about 40%) will mostly comprise of non-AAA rated instruments that will be held to maturity. That means, there would be no trading or price risk. But to do this the fund should not have undue redemption pressure. Higher exit load will reduce such liquidity pressures.

The interest on the instrument would accrue and be passed on as NAV gains to investors. The rest of the portfolio (60%) will remain liquid and also traded if need be.

Now, non-AAA does not mean poor quality of credit. This could be an area of mis-priced credit or short-term financing requirements not met by capital markets. Currently close to 20% of the portfolio comprises of instruments with less than AA ratings.

How does the fund mitigate the risk inherent in lower-rated instruments? One, it builds covenants and structures in some instruments, that can safeguard it, wherever needed. Two, although the fund can invest with an average tenure of 2-2.5 years, it has mostly held its average maturity to less than a year. Lower period reduces risks of uncertainty relating to the credit worthiness of the instruments.

Given the current low in the economy and corporate performance, this could be a good time for the fund to pick up plenty of temporarily mis-priced instruments and those waiting to be upgraded.

Suitability
Birla MTP’s returns do not come without risks; which is why we would not recommend it for a core portfolio. The fund is suitable for investors wanting higher returns within the debt category, with additional risks. For instance, you will be better off investing in the fund than look for unrated corporate fixed deposit schemes that promise high returns.

Still, the fund can at best form a small proportion of such an individual’s portfolio. Given the higher period of exit load, small lump sums would be suitable for investments.

Investing now (before March 31) would provide you with capital gains indexation benefits of 3 years, even if you exit after 2 years.

Given its exit load, Birla MTP may seem almost like a FMP. Only, it is much more actively managed than an FMP, given that it has more liquid papers and is also likely to actively scout for opportunities as it remains open ended. Returns, therefore, can be expected to be superior to FMPs with similar tenure.

Performance
In the last one year, Birla MTP returned as much as another fund that looks at mispriced credit opportunities – Templeton India Corporate Bond Opportunities. But the latter is a more recent fund.

The key difference is their holding is the average maturity. Templeton currently has a portfolio maturity of 2.84 years as against just 0.83 years of Birla MTP. Templeton, in fact, has an exit load of up to 900 days in its fund as a result of its higher average holding period. 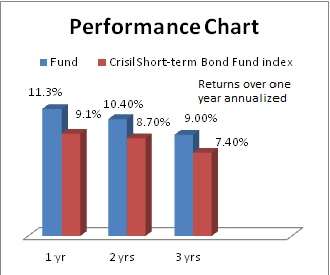 Birla MTP has beaten its benchmark almost always on a rolling one-year return since its launch. While the average outperformance over the benchmark has been little less than 1 percentage point over the life of the fund, the margin of outperformance has gone up in the last one year.

Since, the fund changed it strategy, it has, on an average, outperformed the benchmark by 2 percentage points and as high as 3 percentage points. That is clearly the reward for higher risks.

Birla MTP currently has a yield to maturity of 10.29%. The fund is managed by Rohit Murarka from January 2013. He was earlier part of the research team, when Maneesh Dangi (now Co-CIO) was managing this fund.