Franklin India Smaller Companies Fund is among the less risky funds in the high-risk smallcap space. The fund showcases lower volatility and aggression compared with peers for the following reasons: one, it does not invest in very small companies and has a higher average market cap than its peers. This reduces volatility and liquidity risks. Two, it has a well-diversified portfolio of close to 80 stocks with only the top stock at under 5% and the rest under 3%. These factors have helped the fund display an exceptional ability to consistently outperform its benchmark, while also containing downsides better than most of its peers.

The fund is suitable for investors with a high-risk profile with a time frame of at least 5 years. The correction in the mid and smallcap space offers a good opportunity to enter this fund. Due to the highly volatile nature of smallcap stocks, investments in this fund is best done through SIPs.

The fund’s average 3-year return in the last 5 years was 28.3% compared with its benchmark, the Nifty Smallcap 250 index’s returns of 20.4%. This places the fund in the top quartile among smallcap funds. On a rolling 3-year basis, the fund outperformed its benchmark 96% of the times in last 5 years with an average margin of outperformance of 7.93%. 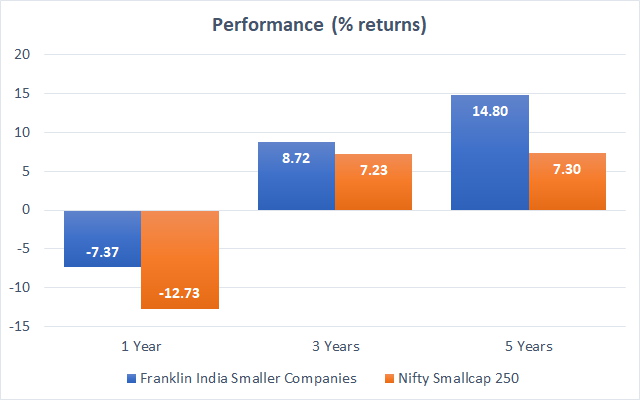 Due to its conservative approach, the fund’s past performance is not comparable with its more aggressive peers.

The fund follows a buy and hold strategy. It has consistently had the lowest portfolio turnover among all smallcap funds. Almost 2 in 3 stocks in the portfolio have remained unchanged for the last 3 years.

The fund is also less aggressive when it comes to market cap allocation compared to other smallcap funds. While most funds in this segment cap their largecap exposure to under 10%, this fund has consistently gone up to 15% in largecaps, keeping its smallcap exposure close the 65% mark.

Franklin India Smaller Companies Fund eschews short-term opportunities in favour of long-term growth. Some such stock calls have worked well for the fund. For instance, the fund entered Dr. Lal Pathlabs in October 2017 around the levels of Rs. 750. The stock is now trading above Rs. 1000 and the fund still holds it. The fund also bought Kotak Bank in October 2017 which has yielded good returns of close to 45% till date. At times, the fund does book profits when it deems necessary. The fund pared its exposure to GMDC between October and December 2017, right at the time the stock hit its peak and started falling. Similarly, the fund reduced its exposure to Triveni Turbines, in which it had a peak exposure of 1.71% in March 2017, before it started to fall.

When calls do go wrong however, the fund waits for a few months before cutting the position. At times, this has led to losses. For instance, stocks like Essel Propack, SKF India, Motilal Oswal Financial services did not yield much results and the fund pared holdings after a wait for a year.  The fund though had conviction in stocks such as Yes Bank that it not only held but also added more on falls.

While smallcap investing is about getting stocks right rather than sectors, some sector calls help when there is an all-round rally or dip in the sector. For example, the fund was reducing its exposure to auto companies, before they started underperforming the broad markets. It also maintained its exposure to IT and financials despite short term underperformance. This paid off well.

The fund has a well-diversified portfolio. At any point, the biggest holding is about 4.5% and the top 10 stocks constitute less than 25% of the portfolio. This reduces the risk to some extent. However, it is also common in the smallcap space for funds to try to avoid concentrated exposures due to the high-risk nature of the underlying stocks.

Franklin India Smaller Companies is one of the oldest smallcap funds, having been launched in 2006. The fund is managed by R Janakiraman and has an AUM of ₹7,577 crore.