Investors looking to deploy fresh money in equities at this point can take a two-pronged approach: go for an equity fund with some allocation separately to a debt fund; else, go for a balanced, equity-oriented fund with some debt exposure.

If you choose the latter, you can do with just one fund and that too, with the tax benefits of an equity fund, for you will enjoy tax-free gains after a year of holding.

Why a balanced fund

While we do recommend a diversified, asset–allocated approach at all times, that is not the only reason for our recommending a balanced fund now. We are also not asking you to go for a balanced fund because the markets have run up. No, we do not think the market is over-valued, although it is certainly not cheap.

The reason behind recommending a balanced fund is that we think this is one of those market phases where you will gain at the same time from two otherwise-not-so-correlated asset classes – equity and debt.

While equities have made enough commotion in the markets, debt has been delivering quietly – both gilts, as well as medium-term corporate bonds. Many debt funds sport double-digit one-year returns now.

Obviously, over a longer period, equity can be expected to outperform the other asset class. Hence, going overweight on debt may seem needless now. However, taking about a fourth of exposure to debt, especially through an equity-oriented fund, could give the best of both worlds.

In volatile times such as the two years until late 2013, we would have preferred a balanced fund such as Tata Balanced (which is also part of our Select Funds list), which does not take an aggressive strategy in equity or debt, compared with HDFC Prudence.

However, given that both equity and debt markets appear to be in a sweet spot, a fund such as HDFC Prudence may be better placed to capture the additional returns in such markets.

The fund is suitable only if you can take some risk appetite as it is known to be a bit aggressive with both its equity and debt portfolio. Over shorter time frames of one year, HDFC Prudence has shown to be highly volatile, underperforming its benchmark on many occasions. Hence, the fund is certainly not for the short term. A five-year time frame would be the minimum investment horizon. 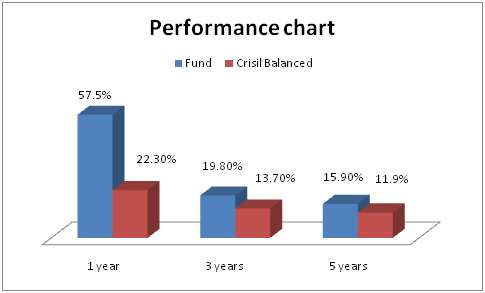 HDFC Prudence has always been at its best during bull phases of the market and underperforms higher than peers in bear markets. In years such as 2008, the fund fell as much a 44 per cent.

That might seem lower than benchmark equity indices but still higher in the category. Conversely, in market upheavals such as the one seen in 2009, it managed 85 per cent in a single calendar year, beating the benchmark return of 49 per cent by miles.

That the fund underperforms over shorter periods, especially in volatile markets, is now more or less a visible trend. On rolling one-year returns too (rolled daily) in the past three years, the fund beat its benchmark less than 50 per cent of times.

You might wonder why you should opt for a balanced fund that cannot curtail falls well enough. The reason is that the fund clearly surges ahead in performance over longer periods of say three or five years.

For instance, its rolling three-year returns showed that it outperformed its benchmark 88 per cent of times. That qualifies as very good performance. Of course, it is the bull phase that eventually helps the fund ramp up fast.

A similar trend is visible when we look at the risk-adjusted returns of the fund – the one-year sharpe ratio is lack lustre compared with peers such as ICICI Pru Balanced, or even with that of its sister fund, HDFC Balanced. HDFC Prudence, however, tops the 3-year risk-return charts. 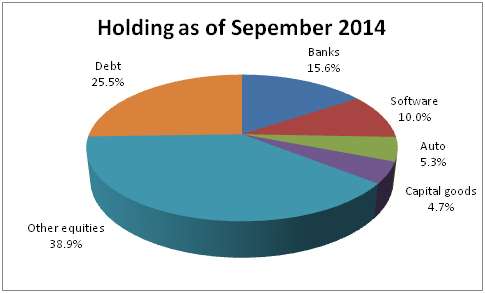 HDFC Prudence churns its portfolio more often than other funds from the same stable of HDFC Balanced. This is evident in its portfolio turnover ratio. The fund also has higher exposure to mid and small-cap stocks compared with peers. As of September 2014, it held over 40 per cent of its equities in this market-cap segment, higher than what HDFC Balanced held.

The fund also takes an aggressive stance when it comes to holding debt. Even as early as last year, it held 15 per cent in long-term government securities. While this did cause volatility, it paid off this year. The fund has since upped its exposure to 19 per cent in gilts, with the rest in medium-term corporate bonds.

A longer average maturity may bode well now as yields have been coming off at the long end. Any rate cut, when it happens, could generate higher returns. The debt strategy is also one reason for the fund’s overall superior performance in the last one year.

The fund is managed by Prashant Jain.