FundsIndia Views: What to make of the market fall

While the equity markets have reacted to all of these, the bigger concern has been whether this is a 2013-like liquidity situation or worse still, whether locally, we are headed for a 2008 Lehman-like crisis. This kind of panic is the worst a market can experience. Why? Because it is a crisis of confidence and such a crisis can easily push a market/economy to a real financial crisis.

Of the above, risk factors that can turn the situation to a crisis stem from – currency, liquidity and crude. These have a bearing on all other events playing out as well. Let us therefore look at these risks before discussing how to handle the markets.

The rupee’s troubles now can be traced to similar behaviour both in September 2008 (Lehman) and August 2013 (US’ intention to move out of the quantitative easing mode). This time too, the US rates have been a major driving factor, not only in India but also in other emerging markets. Now let us first look at what has happened in emerging markets, in the past, after such rate hikes by US. The below chart of the MSCI Emerging Markets Index, after 4 instances of past rate hikes, tells us that the index has rallied. Or in other words, the rate hike has not adversely impacted these markets 6-24 months after such tightening. 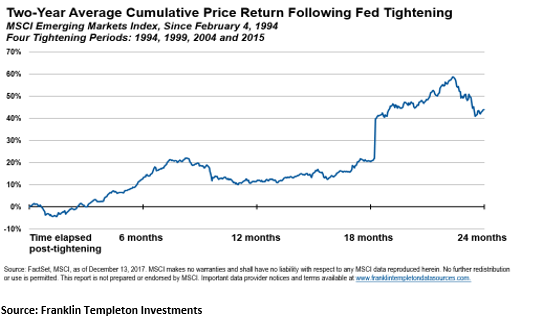 The above graph provides some confidence that Fed rate hikes need not be damaging to markets. However, what has been impacted is the currency. Therefore, let us look at its repercussion.

But why are we obsessed with the currency? Because much of the events we listed out at the top are related to the currency. Crude and the impact on our import bill, gilt yields, forex reserves, besides inflation and deficit all have their fortunes linked to the movement of the rupee.

In this regard, it is noteworthy that the Indian currency is not among the worst performers unlike 2013.  Besides, India’s inflation, current and fiscal deficit were far higher in 2013 compared with the present. The forex reserves were also below $300 billion ($275 billion in July 2013) then. Clearly, the currency is not causing the kind of damage that it did in 2013. Perhaps this is why the RBI sounds less worried about it than most of us.

If history tells us something about currency, it is that it may settle into a new normal, provided foreign debt and the dollar needs of oil marketing companies are handled with care as it has been done in the past.

With that, let us move to the more serious threat of a local Lehman-like crisis. The Lehman crisis taught us that a liquidity crisis leads to solvency risk. Hence, the recent IL&FS fallout is not something that can be swept under the carpet, especially given the state of bad assets that banks are today saddled with.

What has transpired post the IL&FS debacle is a breakage of confidence in the debt market. Sharp drop in commercial paper issuances due to lack of lenders and sharp rise in yields are the indicators of a crisis in confidence.

In this regard, a few recent events provide some confidence: one, the direct takeover of the IL&FS board by the government and not even leaving it to some other player underscores the fact that the government is fully cognisant of the potential risks. Two, on the liquidity front, assurances by the Finance Minister, together with SBI clarifying that lines of credit for NBFCs are available provides some confidence. Three, more recently, SBI upped its planned purchase of portfolios from NBFCs. This involves selling of loan portfolios by NBFCs to banks. Many of these well-backed sound portfolios (like priority housing loans) and will provide liquidity to NBFCs; without putting banks under risk. These factors assuage some of the key concerns that triggered the current correction.

That leaves crude price as the single largest factor that is beyond India’s control. India is considering buying crude oil from Iran despite sanctions that will come into effect in November. This tells us India is desperate to keep its import bill from sinking. India may be allowed to pay entirely in rupee for Iran’s crude post the sanction.

As far as crude goes, what India can do is deal with it through judicious fuel policy that includes how much oil marketing companies can bear and how much can be through duty cuts and so on. Hence at this point, crude can be termed as the biggest challenge for the Indian economy and markets.

The above macro factors are not new events to the Indian economy. Yet these assume greater importance now – with an upcoming year of election.  Let us therefore look at how markets behaved pre and post elections in earlier instances.

The last 2 months of this calendar would have 5 key state elections that could provide some cues about the Central elections in 2019. Stock markets have traditionally seen volatility pre and post elections. While we do know that most elections have shown a rally ahead of the outcome, you will be surprised by the kind of returns. The data below from a research report shows the various elections years and the market returns pre and post the election months.

What matters is the opportunity

The above data is only for those of you who have the eternal question on whether you should get in pre-election or post-election. We do not subscribe to the idea of betting on elections to invest for the long term.

What we do know however, is that the pre-election scenario at this point incidentally affords plenty of investment opportunity, going by the nature of correction in the market, triggered by macro concerns.

Look at some of the data points to know the depth of correction and the opportunity that lies.

And if many of you thought stocks are still expensive, here’s more data:

The swiftness of the fall is not reflected only in declining prices. Also look at the trailing index P/Es:

The above data suggests the swiftness and depth of the correction. The following points need to be remembered when you see such a correction:

I mentioned in point 3 that the nature of the issue on hand – especially on currency and crude are not frivolous. What if they blow up to a full-fledged crisis? While the probability is not high now, I am not taking a bet on it. What I would like to point out is that it has happened before in 2008 and 2013 and we know equity markets survived and grew.

Those who grasp the 4th point (above) are the ones who will build wealth. It takes a lot of nerve to invest, to hold and to wait to see the results. The best strategy would be to go about investing in a phased manner over the next 6-8 months until elections are over. A mix of multi-cap and midcap funds are good for averaging, but making sure your debt allocation remains within your original allocation is the way forward. Averaging in mid and small-cap funds alone can be dangerous. Let your investments be category-allocated.

Investors who took 1-year bet on the markets would have been severely hurt. It may be a hard-earned lesson that equities are meant only for the long haul. Our suggestion to them is to exit if they need the money or shift to liquid funds to at least recover some losses.

For the long-term investors, it is evident that this market affords an opportunity. Those of who tap it and stay with it will not have reason to complain, when you look back.

What to make of the market fall? Make money, for the future, leaving aside all the macro jargons and views.

FundsIndia’s Research team has, to the best of its ability, taken into account various factors – both quantitative measures and qualitative assessments, in an unbiased manner, while making the statements mentioned above.  To know how to read our weekly fund reviews, please click here.

4 thoughts on “FundsIndia Views: What to make of the market fall”