The Sensex has galloped nearly 10,000 points in the space of just over a year. This incredible run has come in even as reforms disrupted the corporate and economic recovery process. Can 2018 score a repeat of 2017, as reforms and recovery get underway?

On a wing and a prayer

One, the expected economic recovery was delayed. The government had spent the years between 2014 and 2017 improving macro-economic variables and the hope was that this would finally translate into growth. However, the after-effects of 2016’s currency withdrawal and the implementation of the GST not only disrupted the normal functioning of business but also delayed growth. GDP growth slowed to 6% for the first half of the FY-18 fiscal against 7.7% in the comparable period of FY-17. This apart, lending and borrowing activity was slack as banks and companies continued to attempt repairing their balance sheets; the Reserve Bank eventually forced banks to deal with their bad loans.

Two, there was an abnormal complete lack of volatility in the markets. This phenomenon is odd given the several events that should have, by all accounts, caused some worry. Apart from the GST, crude oil prices were rising, the Reserve Bank was becoming cautious on inflation, companies were seeing their raw material costs rise on higher commodity prices, farm produce prices were crashing despite good monsoons, and bond markets were signalling pessimism. Despite it all, volatility (by looking at rolling 1-month Sensex returns) was the lowest in 2017, compared to the years since 2007.

The third was that market valuations found no earnings growth support. Overall corporate revenues and profits grew just 10% and 3% in the April-September 2017 period against the year ago. That hardly supports the 36% returns in the Nifty 500 index. The two charts below show the contribution of corporate profit to GDP and the PE movement of the Nifty 50 and the Nifty Free Float Midcap 100. 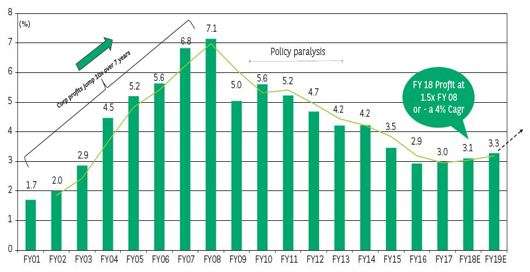 The chart above shows the proportion of corporate profit to GDP over the years. Source: BNP Paribas MF

In other words, valuations that ran ahead of fundamentals and delayed economic growth by one-off structural reforms did not deter the market from moving up. That there was no fear was also reflected in the low volatility in the market in 2017. Why was this and what is the market taking cognisance of to keep itself afloat? Let’s look at the drivers.

On the macro-economic front, indications are that growth has bottomed out. The September quarter GDP number at 6.3% was better than the 5.7% of the June 2017 quarter. So what can drive growth in the longer term?

In our view, market returns have come in ahead of improvement in corporate fundamentals. Please read our view on earnings revival here. We think 2018 will be a year when these fundamentals will come into place to justify the rally. This year can be more subdued to allow for economic green shoots to actually take root and sustain.

The characteristics of the 2017 market show that for now, returns have run ahead with virtually no volatility. 2018 will be a year when focus will return to fundamentals and growth along with external and election-based risks. Given this, there is no single strategy that comes out ahead. Here is what you should do.

Of course, in all this, keep in mind that you need to have an asset-allocated portfolio. It will help protect your portfolio and reduce the effect of market downturns and volatility. It serves you better than trying to time markets.