These are extraordinary times. The equity market has rallied without earnings entirely coming on-board with hope that there would be an economic revival. The debt market on the other hand, appears to be factoring an interest rate hike, as if there is sound economic growth underway; that can force a rate hike. The equity market is optimistic and the debt market, writ with pessimism. But we prefer the pessimism in the debt market for the simple reason, that there is more opportunity in pessimism.

Before we move on to our view on the debt market and the strategy you need to adopt, let us quickly understand the events in 2017 and the risks for debt in 2018.

2017 saw a roller coaster ride for duration funds. The data below will tell you that from a peak 1-year return of close to 14% In January 2017, the Crisil composite bond fund index’s (which is the benchmark for most dynamic bond funds), return has steadily dwindled to less than 4 percent now. 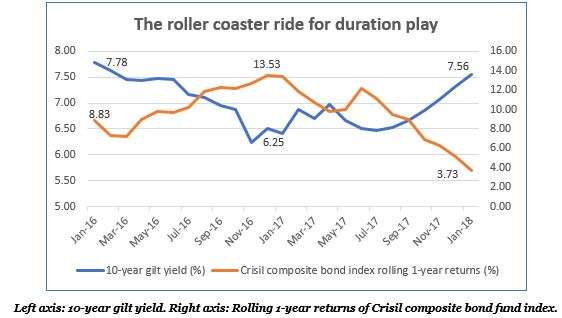 From a surprise neutral stance in early 2017 followed by a 25-basis point cut in August and a further no rate cut stance, the RBI kept the debt market guessing for a good while, causing volatility. The image below will show you that yields of 10-year gilts started moving up despite the rate cut in August as the market started factoring other worries of rising inflation and concerns over fiscal deficit. Rate hikes elsewhere in US, we think, the market handled quite maturely.

From 6.5% in September 2017, the 10-year gilt has moved a straight 7.5% now. If we must narrow down the concerns over this yield move, they would be – inflation, fiscal deficit, and rising commodity prices. Let us look at these factors.

Inflation and rising commodity prices: Retail inflation moved from 3.58% in October 2017 to 5.21% in December 2017. High food inflation and impact of HRA hike under the 7th Pay Commission besides a low base are reasons for the rise. While, these factors are likely to settle, especially with food inflation showing no primary risk, sharp hike in crude price may pose a challenge to inflation. However, most experts opine that with US shale production remaining sound, the likelihood of countries like Russia opting out of production freeze and the continuing thrust on renewable energy in developed countries, a price shock in crude is unlikely. Hence, while this factor needs observation, it is far from threatening at present.

Fiscal deficit: With government spending reaching 96% of its targeted fiscal deficit in October 2017, worries of fiscal slippage dogged the market. Lower GST revenue because of rate cuts, further caused concerns. To add to this, the recent announcement by the Government of an additional Rs 50,000 crore of borrowing (0.3% of GDP), added fuel to the debt market’s fear. This number was reduced to Rs 20,000 crore recently.

Despite a Moody’s upgrade on our rating and a positive outlook by S&P, besides record inflows into debt market by FPIs, the market has taken the above-mentioned factors seriously enough to foresee a rate hike. Concerns exist, without a doubt. But is the reaction realistic or overdone?

While it is increasingly evident that rate cut scenarios are bleak now, is there a case to factor rate hike so quickly, as the market seems to?  Let us understand this in the light of when a rate hike is typically resorted to.

Let us look at earlier rate hike moves. 2013 was a clear one, with deterioration on every front and very importantly with a dangerously slipping rupee. We are not there now. So, let us go to 2006-07 when there were rate hikes under a different economic condition. Let us see the circumstances then and now.

In the equity market, experts have been stating that we are no where near the 2007 peaks, not just in terms of valuation but in terms of macro-economic growth as well. And that there is enough upside to grow to justify the multiples that the market is rewarding to stocks.

The data below also suggests that we are at a low in terms of economic growth, since the slowdown that started in 2016, ahead of even the demonetization (read our article on the slowdown here). We have sufficient surplus capacity now while a blazing economy like in 2007, typically operates at high capacities. Our credit growth has been poor, and the little growth that came was largely supported by retail credit. Even while there has been pick up in the last couple of months, industrial credit growth is still lost in the woods.

The simple point is that the economy is just shrugging off the impact of slowdown as well as the impact of major structural reforms. It is nowhere near the 2007 exuberance in terms of real growth nor near the 2010-11 feel good period of forced, indiscreet growth. If this be the case, what can force a near-term rate hike? Fiscal slippage is not at unacceptable levels, given that there has been no imprudent spending and there have been major reforms; inflation is under control, despite trending upwards and not having fuelled economic growth. And importantly the currency remains stable.  On the other hand, the economy is struggling to shrug off challenges and revive. Hence, factoring in a rate hike scenario at this stage appears a case of too much, too soon. So, what are we expecting?

What should your strategy be?

We will review our debt outlook if the budget or inflation numbers throw any negative surprises.