Repo rates – How they affect the economy

You might have seen a newsflash last week, along the lines of: “The Monetary Policy Committee of the RBI cut the repo rate by 35 basis points to 5.40%.” What is this term “repo rate”, that’s in the news every couple of months? More importantly, how does it affect the common man – the borrower, the lender, the investor and the others? Read on to find out!

What is repo rate?

Let’s begin by understanding what the term repo rate means, in its simplest form. When you borrow from a bank, they charge an interest on the loan. In the same way, repo rate is the rate of interest that banks must pay to the RBI when they borrow from it. So, if the repo rate is 6% and a bank borrows Rs. 100 from the RBI, it must pay an interest of Rs. 6. Conversely, when banks deposit excess funds with the RBI, they earn interest at the reverse-repo rate, which is 0.25% below the repo rate.

Why does the repo rate matter?

Banks make profits by charging a higher rate of interest on their loans than what they offer on deposits. This is where the repo rate comes into play. It acts as a benchmark rate on which margins are added by financial institutions, until finally, it trickles down to the rate that you pay on your loans, or the rate you get on your fixed deposits. In other words, higher repo rates translate into higher interest rates in the economy overall.

As banks borrow large amounts via the repo route, the repo and reverse-repo rates serve as powerful tools for the RBI to control the supply of money in the system. The central bank uses these rates to achieve price stability and boost the growth of the economy. How does this work?

How the RBI dictates monetary policy via repo rates

One of RBI’s key mandates is to ensure sufficient liquidity (money supply) in the Indian banking system. In situations of liquidity shortage, lowering the repo rate helps control liquidity. Keeping repo rates low encourages banks to borrow from the RBI, allowing them to lend more. This adds liquidity in the economy. Reverse repo transactions drain liquidity from the system, in the event of excess money supply. High reverse-repo rates incentivise banks to deposit money with the RBI, lowering liquidity levels.

Another important function of the RBI is to stimulate economic growth, while keeping prices relatively stable. This requires a delicate balance. Keeping interest rates high discourages companies from borrowing, and hence slows economic growth. However, low interest rates could lead to excess borrowing and spending. This pushes prices up, as demand for goods outweighs supply; inflation in other words.

Liquidity and inflation are tied to each other; high liquidity causes inflation while stimulating growth, and a liquidity crunch causes prices to stay low, while suppressing growth. The RBI’s job is to strike a balance between stable prices, stimulation of growth, and adequate liquidity. And a bi-monthly review of repo rates is how they go about it.

How does this affect you?

This is the fourth consecutive repo rate-cut by RBI. The rate currently stands at 5.40%, from 6.50% in February, when the rate-cuts began. The immediate effect of lowering repo rates is the increased availability of credit, at lower interest rates. So the good news is, if you plan to take a loan in the near future, the rates are going to be lower than they have been in a while. Things don’t look as good for those on the other side however. Investors will get lower rates of interest on fixed deposits and bonds. For instance, SBI recently lowered FD interest rates for both long and short-term tenures, following the trend in repo rates.

Here’s a look at how repo rates have moved historically, along with bank fixed-deposit rates. 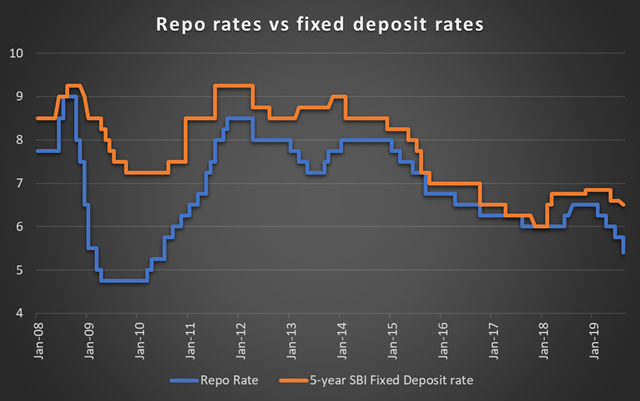 In summation, the reduction in repo rates is a cause for cheer for borrowers while hurting new depositors.

In the present situation, where growth has been slowing, equity markets will look at the rate cut as a positive. Companies now have cheaper access to credit, which will encourage them to borrow more. This will in turn boost industrial investment and growth. The move will ease the tight liquidity situation in the lending space, encouraging lending and borrowing activity. This is expected to increase consumption demand, so as to combat the slowdown that the economy is currently facing.