You would hear your mutual fund advisors recommending that you hold equity funds for the long term; typically five years or more. Ever wondered what happens, especially when you invest lump sums and exit over a shorter period of say one or three years? Chances are that you may have been left with lower money than you invested!

We ran some numbers to check this with indices as well as mutual funds with a long track record to see if staying long is the only way to build wealth. The numbers revealed the following: staying reasonably long is a must; but with equity mutual funds, you have to also stay invested with the right funds. Else, your wealth building can be sub-optimal.

We will cover our analysis on the behaviour of indices this week. The following week, you will see the same numbers drawn within the universe of mutual funds.

We first ran the rolling returns of some key indices over 1, 3, 5, and 7-year time frames. Rolling returns help capture the returns you would have got had you invested on any day over this time frame.

The returns are calculated everyday for the above-mentioned time buckets over a 10-year period between March 2006 and March 2016. The finding below is self explanatory. With the Nifty, you would have ended with negative returns, a fourth of the time, had you tried to take your equity money within a one-year period. The chances are worse with the mid-cap index.

There was a 2 per cent chance (based on when you invested) that you ended with negative returns even over a 5-year time frame with the Nifty. When did this negative 5-year returns period occur? It was between the peak of January 2008 and January 2013, and also October, November or December 2007 (run up to the peak) to similar months in 2012. In other words, investing in a peak market may leave you with negative returns even five years hence, especially if you had invested as a lump sum.

Over a 7-year period, this probability becomes zero.

But what if we stayed invested for the long term? What are the chances of building wealth? We looked at the probability of these indices delivering 10 per cent and 15 per cent annually over the same time frames of 1, 3, 5, and 7 years. 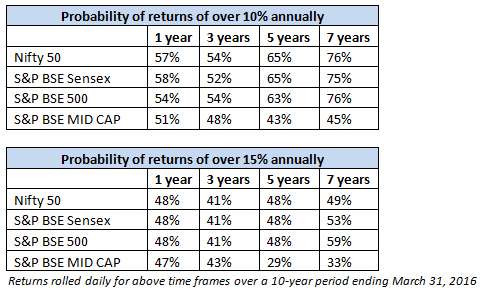 The above data provides a couple of interesting inferences:

• The mid-cap index struggles to consistently deliver over 10 per cent returns. While the Nifty 50 delivered 10 per cent or more annual returns 76 per cent of the times over a 7-year time frame, the BSE Midcap could deliver alike only on 45 per cent of the occasions.

• Delivering 15 per cent annual returns consistently is not easy. The Nifty managed this 50 per cent of the occasions over a 7-year time frame; the mid-cap index could do so only a third of the time.

• But interestingly, the mid-cap index delivered 15 per cent returns on more occasions on a one-year basis (47 per cent of the time) than it did over 5 and 7-year periods. Simply put, mid-caps deliver high returns over shorter time frames.

This is why when you pick a mid-cap fund based on its one-year record, you may well go wrong. What does the above data tell you besides the fact that investing is for the long term?

• One, you have to keep your expectations moderate when you invest in equities over the medium term. For instance while the Nifty delivered 10 per cent or more returns over a 5-year period, two-thirds of the time, it had only a 50 per cent chance of delivering 15 per cent annual returns. Hence, if you are building your goal based on time frames, be reasonable in your expectations.

• Two, you don’t have to necessarily load up a lot on mid-caps to make your portfolio click. While mid-caps, no doubt, deliver more, they don’t do so consistently. Their ability to deliver 10 per cent or 15 per cent annual returns over longer time frames pales when compared with large-cap or diversified indices.

• Three, the data shows that a broad-market index like S&P BSE 500 has done relatively well in terms of consistently delivering over 15 per cent annual returns. This index is a mix of large-caps and mid-caps. Its performance suggests that a combination of large and mid-cap funds, or just a multi-cap fund, can perform better for you than going overboard on one segment of market cap.