HDFC Mid-Cap Opportunities fund (HDFC Mid-Cap), a mid-cap fund with a consistent track record, has delivered 18 percent annualised returns since its inception in June 2007. Its launch as a closed-ended fund, ahead of the 2008 financial debacle, helped it manage the volatility of the 2008 crisis well. This helped the fund stay fully invested and bounce back the following year. But the fund has proven its consistency even after it became an open-ended fund thus cementing its track record.

The fund beat both its category average and its benchmark over longer time frames of 3, 5 and 7 years as well. This has come on the back of a combination of good stock picks, low volatility and consistent performance. There has so far been no change in fund manager in this fund. This has also helped maintain continuity in strategy.

At a time when midcaps have seen a steep run (with the Nifty Free Float Midcap 100 index delivering 21 percent compounded annual return in the past 3 years), you may wonder whether a mid-cap fund should form part of your investment now. Mid-cap funds do hold potential to generate superior returns and are good additions to any long term portfolio. However, given the rally in this space, many stocks have run up ahead of their earnings potential. Stocks well down the market-cap curve, which several mid-cap and small-cap funds invest in, are even riskier with limited liquidity and other quality concerns.

Therefore, it is important to choose those mid-cap stocks that still have the potential to grow over the long term, are reasonably valued, and are not extremely risky. On these counts, HDFC Mid-cap delivers. It holds almost a fourth of its portfolio in large-caps (as allowed in its mandate) and contains downside well during market corrections. It avoids small-cap and micro-cap stocks. In the mid-cap space, the fund has stayed away from short-term opportunities and instead chosen stocks that are beneficiaries of a long-term turnaround in the economy.

It is this mix of large-cap strategy, diversified approach and avoid smaller market-cap segments that has allowed this fund to manage a mid-cap theme at a time when quite a few mid-cap funds have restricted their inflows because of growing AUM size. HDFC Mid-Cap has not thus far restricted investments, despite its sizeable AUM.

However, given the market conditions, exposure needs to be taken in a phased manner through SIPs/STPs. A long-term time frame of not less than 5 years and a high risk appetite is warranted.

While short-term point-to-point returns may not place HDFC Mid-Cap in the toppers’ chart, the fund scores on consistency in performance.

When the fund’s one-year returns are rolled daily over three-year time frames, it beats the benchmark an impressive 92 percent of the time. It has beaten the category average 82 percent of the time as well, a commendable figure, given that it avoids the high-returning smaller sized stocks that peers have invested in.  The fund’s performance gets even better over longer time frames. It beat both its benchmark and its category on all occasions when its three-year returns were rolled daily over the last five years. 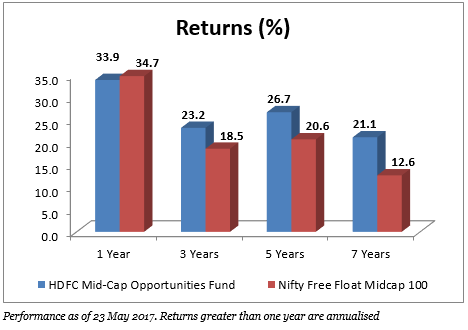 HDFC Mid-Cap has the lowest standard deviation amongst its peers suggesting that its returns do not swing wildly. The fund’s risk-adjusted return (Sharpe ratio) is in the top quartile suggesting that the fund is delivering returns commensurate to the risk it takes. It has also contained downsides better than the index at all times aided by a well-diversified portfolio with selective large-cap picks. For example, during the calendar year of 2013 when the markets were down for much of the period, the fund delivered 9 percent returns while the index was down 5 percent This performance was also better than some of its peers such as Franklin India Prima, Mirae Asset Emerging Bluechip and L&T India Value Fund.

Although a mid-cap fund, HDFC Mid-Cap has leeway to invest up to 25 percent of the portfolio in large caps and it utilises this option to the hilt. In the past two years, the large cap exposure has been consistently at around 25 percent.  This has lent stability to the portfolio. With a fourth of its holding in large caps and with also a highly-diversified portfolio, how did the fund generate returns commensurate to this category? One, although midcap stocks as a segment have outperformed large-caps, the large-cap stocks held by this fund have done well in the last 2 years. Of the 12 large-cap stocks that were present in the portfolio through the year, two in three delivered returns greater than even the BSE Small-cap index which had delivered 38 percent (1 year performance as of 31 Mar 2017) during the same period.

Two, the fund’s early sector calls and its patience with holding stocks and exiting them at the right time also paid off. For example, the fund has been consistently overweight on the auto sector compared with its category average. Its call on tyre and battery stocks yielded good results. Of the current six auto stocks in the portfolio five have been in the portfolio for over two years. The exit of Amara Raja Batteries was timed well as the stock has not performed as well as its peer Exide Industries, in the portfolio.

Similarly, the fund took a prescient call in going underweight on IT stocks by August 2016. It has been underweight in pharma since 2014, the time since the FDA issues with the industry started cropping up.

The fund steadily played the Indian consumer story with over 40 percent of the portfolio invested in sectors such as auto, consumer goods, private banks, and NBFCs. These three sectors along with industrials have consistently constituted more than half of the portfolio over the last two years. Stocks such as Sundaram Fasteners, Whirlpool India, Blue star, Balkrishna Industries, Tube Investments and Greenply industries which have more than tripled since 2014 have been in the portfolio even prior to 2014. 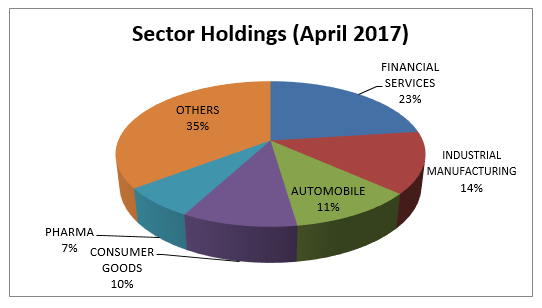 The fund follows a buy and hold approach, with a very low turnover at around 20 percent. More than half the stocks have been held for more than two years.

The fund’s AUM is Rs 15,734 crore and the fund manager is Chirag Setalvad.