How your investment behaviour can be a recipe for poor returns

March 21, 2014 . Vidya Bala
Equity Research . Mutual funds
There’s money to be made in the market . But it’s not easy, it’s not quick nor is the opportunity available at all times. So how do you counter this problem?

In this article, I wish to share a few thoughts from an interesting presentation made by Prashant Jain, ED and CIO, HDFC Mutual. In this presentation, Prashant Jain points out the mistake of most retail investors in timing the market, at the wrong point, repeatedly. He points out how a simple indicator such as the Sensex forward P/E can provide sufficient indicators for you to make the right moves. 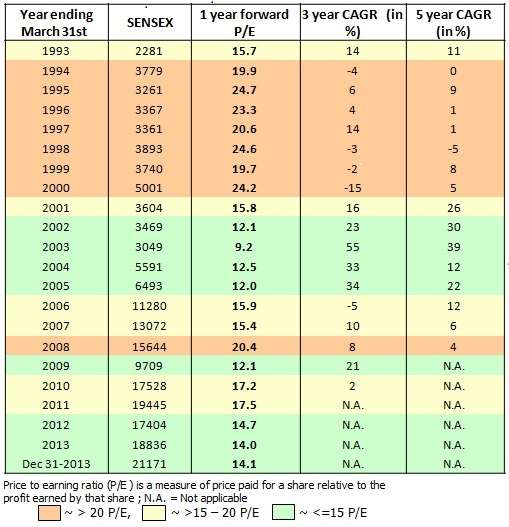 The table above clearly shows how investing in the equity market when valuations (measured by forward price to earnings ratio) are low (seen the green area between 2002 and 2005) have delivered rich returns over 3 and 5 years.

For instance an investment in the Sensex in 2003 would have meant your money grew 3.7 times in 3 years and more than 5 times in 5 years! Typically a price earnings ratio below 15 times can be considered low.

Why is that so? Because in a normal scenario the economy can be expected to grow at a nominal rate (nominal rate includes inflation) of 15%.

That is also the rate at which economy expanded at nominal rate over the last 5 years and 10 years on an average. A forward P/E ratio below that would therefore indicate that corporate valuations are not reflecting the higher economic growth and therefore will be re-rated.

Low P/E but not good times

But the next table, given below, makes it hard for you to actually invest when P/Es are low; simply because those seem to be the worst of times to invest. The table shows it was during setbacks such as the 9/11 attack, unexpected defeat by a political party and the sub-prime crisis that forward price earnings ratios were low.

In other words, markets had a very bleak forward view of corporate/stock fortunes. But those were the times to invest to harvest rich dividends later. 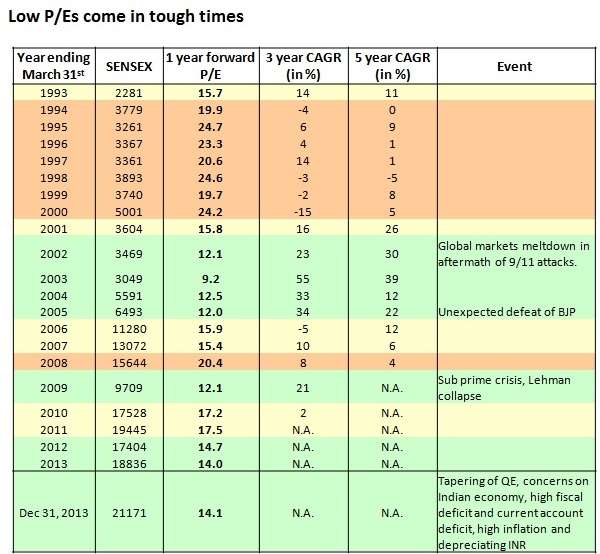 Of course the QE tapering and the Indian economic concerns prevailing now, have once again posed a low P/E opportunity.

So have investors deciphered this clue, hidden by all negative events and sentiments? Seldom, suggests data again. The following table shows how mutual fund investors have, time and again, floundered by trying to join the market euphoria rather late. 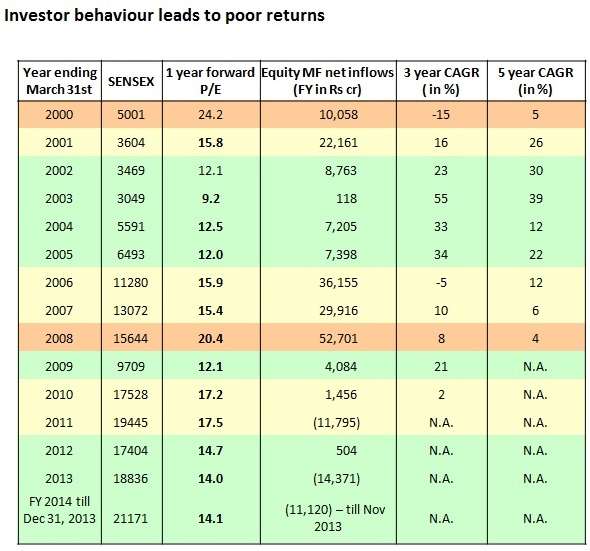 Data shows that investors poured money in market peaks every time, only to burn their fingers later and then completely withdraw into a shell (such as the year 2003 when the investment into MFs was paltry), when valuations were actually compelling.

As can be seen, 2013 was one such year when investors withdrew money. It is not hard to figure how much you would have missed in the quick rally post September 2013 till date.

The above presentation by Prashant Jain enabled us to easily correlate our own investors’ behaviour. How many of thought you should enter the markets only when you see returns and are reluctant to invest when markets are down? Worse still, how many of you were tempted to stop SIPs as you saw the markets go down line ninepins?

Let’s first admit the problem. There’s money to be made in the market and plenty too. But it’s not easy, it’s not quick nor is the opportunity available at all times. So how do you counter this problem?

Only in 2 ways: stay invested long enough to tide over the negative periods and stay invested through the ups and downs of the market through systematic investing to average your costs so that your returns are optimal.

Simply put: have a long-term time frame for equities/equity funds and use SIP to tide over the ups and downs to stay invested and buy on dips. Sounds simple? Then why is it so  tough to follow this?

Datas taken from a presentation by HDFC AMC.