Over the last few years, Multi-national Corporation (MNC) funds have managed to outperform a good number of large cap and diversified equity funds. Despite the rich valuations of MNC companies, stocks in this space rallied well over the past few years, given that they are typically the preferred option in volatile years (until 2013). What makes this segment of equity stocks tick? What are the risks they carry, and can they be compared with other regular sector funds?

MNC funds invest in multinational firms listed here, and also in stocks that have high Foreign Institutional Investor (FII) holdings. MNCs are favoured by markets for a few reasons. First off, they are usually cash rich and low on debt as their foreign parent adequately funds them. As a result, they have healthy cash flows, and a sound balance sheet, besides facing very little issues on corporate governance. Added to this, they are often stable to high dividend payout candidates. In the last five years, MNC funds have generated close to 25 per cent returns compounded annually. That’s far higher than the large and diversified fund category average of 13 per cent.

MNC fund investors though will have to contend with valuation risks most of the times. Being cash rich and belonging to sectors like Fast Moving Consumer Goods (FMCG) and pharma, most MNC stocks tend to trade at high valuations, with their Price Earnings Ratio (PER) in high 20s and 30s. That means their earnings growth has to keep pace with valuations. A failure to do so often leads to markets punishing the stocks.

There are also a few other issues that add to the volatility of MNC stocks. One, issues such as high royalty payment to the parent company crops up from time to time in the case of these stocks, and sometimes, they tend to pull down prices. Two, some of these stocks also see a sharp increase in their prices on rumours of delisting, as many investors tend to take positions based on such news. Such rallies often result in companies not resorting to delisting, even when they had planned to, as the high valuations make it a less attractive position for the company to buy back shares and delist. When a delisting, however, remains a rumour and does not eventually occur, then the stocks often react negatively as positions are unwound. A change made to the delisting regulations in 2014 further made delisting of shares a tough task for MNCs.

Three, these stocks also tend to run up quite a bit on buyback news. However, given that in recent years, the non-promoter stake has to be high enough (not less than 25 per cent), the buyback was not an option for MNCs who held 75 per cent or higher. In fact, promoters had to shed stakes when it was over 75 per cent.

MNCs also pay higher dividends as it means they have to send profits back to the parent without other significant legal/tax implications. But to an investor, it means that instead of reinvesting in the company’s growth, the money is distributed.

While those are some of the limitations, it is true that MNC stocks possess some strong fundamentals that make them a good investment candidate. Besides their cash rich nature and low debt, MNC companies often enjoy demand from a dual market. One is the domestic market (India), where the unit is, while the other one is the other foreign markets of the parent, including its home market, as MNCs often use Indian units as a low-cost outsourcing hub. This is true of many auto, auto ancillary, and capital goods companies. To this extent, MNCs are run at optimal capacities.

MNC companies also have the advantage of the parent sharing latest technology, providing technical know-how, or sometimes, key inputs that make the Indian unit either superior in terms of the quality of the product offered, or in other cases, quite cost efficient compared with a full import that may otherwise be needed. This is often very true of machinery and engineering goods.

Thus, MNC funds can boast of stocks with mostly sound fundamentals, albeit highly priced. Although they are thematic funds, they are more diversified than sector funds for one simple reason – they hold a basket of sectors. In addition, they hold a basket of both defensive (FMCG, pharma) and growth sectors (capital goods, engineering and auto) giving them an option to choose sectors based on market conditions.

To this extent, you could say that MNC funds can be less cyclical than other sector funds, and their performance across markets too suggests this. Still, these are considered as theme funds with concentrated exposure to a theme. Hence, your investment should not exceed 10-15 per cent of your overall equity portfolio. At this juncture, if you choose to invest in these funds, instead of investing lump sum, consider investing through Systematic Investment Plans (SIPs) with an investment horizon of at least five years.

Birla MNC Fund outperformed its peer – UTI MNC Fund, and the CNX MNC Index by a wide margin over the last 15 years. Had you started a Rs. 1,000-a-month Systematic Investment Plan (SIP) in Birla MNC 15 years ago, you would have a handsome Rs. 14.7 lakh today. That’s an Internal Rate of Return (IRR) of 25 per cent. On the other hand, UTI MNC generated an IRR of 23 per cent, compared to the Index IRR of 17 per cent.

Birla MNC and UTI MNC funds’ one-year returns, rolled every day for the last five years, suggests that both the funds beat its benchmark 90 per cent of the times. On a point-to-point returns basis, Birla MNC scores over the UTI MNC by delivering 36 per cent and 25 per cent over the last 3 years and 5 years respectively.

However, on a risk adjusted returns basis, UTI MNC has been less volatile (thanks to its high large cap exposure), generating better risk-adjusted returns when compared with Birla MNC and the CNX MNC Index. 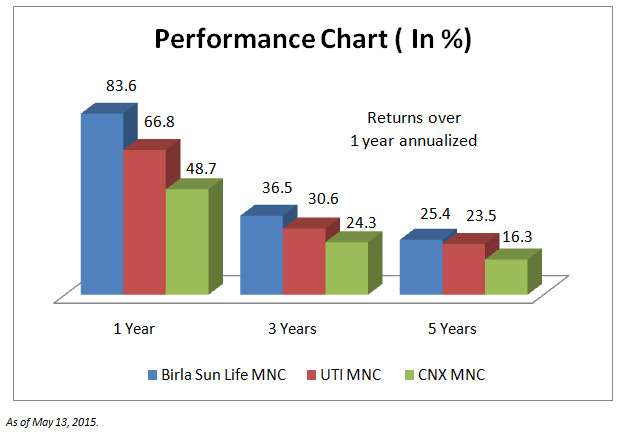 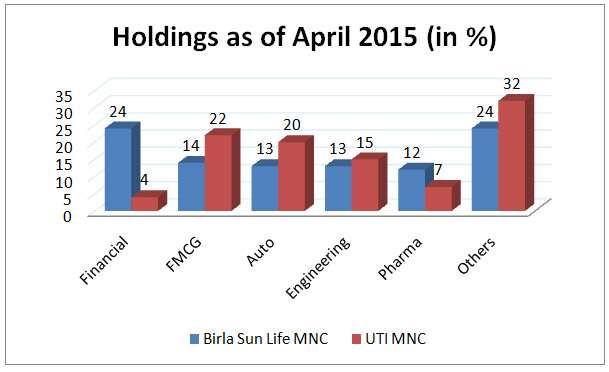 Both the MNC funds follow the growth style of investing, as this segment can seldom be expected to provide ‘value’. Going by past record, Birla MNC holds higher mid-cap MNC stocks, and it currently holds about two-third exposure to them. On the other hand, UTI MNC has more than 50 per cent in large cap stocks.

Both the funds have adequately diversified their portfolios by holding about 40+ stocks in 10 different sectors.