While the stock market may have cheered the announcement of bank recapitalisation instantly, we think this is more a long-drawn but game-changing play – not just for the banks but, more importantly, for other sectors and the broad economy.

Here’s what we think, in short, could be the impact of this capital infusion: Armed with fresh capital infusion, public sector banks (PSBs) will not only be better placed to provide for stressed assets in their own books but also expedite balance sheet clean up in many stressed sectors and trigger assets sales. While that happens, many sectors may get nimble-footed and ready for a possible capex/opex recovery triggered partly by Bharatmala road spending.

In this article, we are not getting into the nitty-gritty of how much the recapitalisation will clear up bank balance sheets, how much of a ‘hair-cut’ banks will have to take with their bad loans and how much they will grow. We will leave that to the sector experts and rating agencies.

Instead, let us try to understand why the bank recap execution may have a much more broad-based impact on the economy, than just on banks.

Let’s step back to understand the slow and painful dip in lending to the industrial sector and the build-up of bad assets in the country.

Fall in bank credit to industries

Banks were aggressively lending to industries before the financial crisis in 2008. But this was utilised in capacity expansion/infrastructure building thereby generating income to service the debt. After peaking in 2008, such lending went down to modest double digits in 2009 only to pick up again in 2010 when a seeming revival happened. Since then, credit growth to industries remained steadily high and crossed the teens in 2012. The data below will tell you that after peaking in 2012-13, there has been a steady dip in the growth; with actual credit contraction from October 2016. The next bar chart will also tell you that credit to industries has steadily come down as a proportion of bank’s lending. From 45% of total non-food credit in September 2012, it fell to 37% in 5 years (September 2017). Retail lending took the share away. 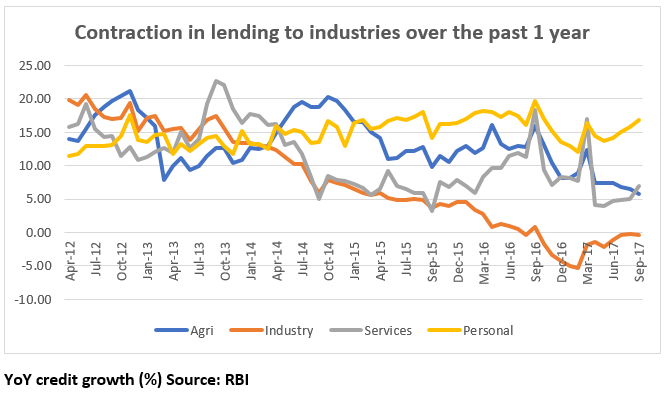 Why banks stopped lending to industries

Now, this lower credit growth to industries happened because of 2 reasons: one, interest rates went up, but two, and more importantly, what banks had lent thus far was turning bad. The graph below will tell you that the stressed assets in the system went up significantly in the case of industries even as lending to other categories such as retail or services remained low.  In the graph below, stress advances indicate gross non-performing assets (loans where borrowers did not pay for more than 90 days) and those loans that were restructured (either longer period or lower rates or such concessions) to enable the borrower to pay. Hence, stressed advances ratio provides a good indicator of not only bad loans but loans that could have gone bad. 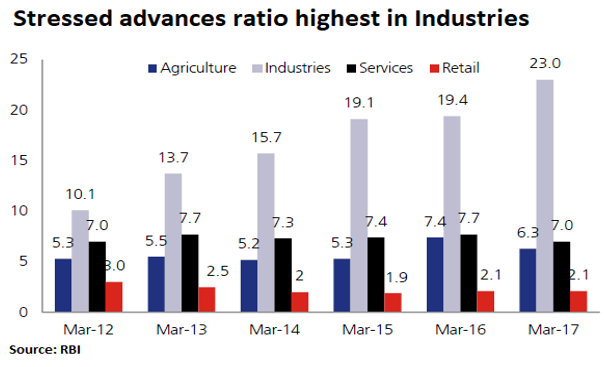 Needless, to say, PSBs account for almost 90% of the gross NPAs in the banking system.  The graph below will tell you how gross NPAs (GNPAs) and stressed advances ratio have deteriorated significantly for PSBs over the past 4 years.

The inability of companies to repay causes banks to provide higher for such bad assets, thus hurting their profitability.

Unfortunately, the story doesn’t end with banks. The distressed companies, bogged down by heavy debt, become cash-strapped, are unable to be competitive in the market and do not carry out any investment/expansion activity. Sectors dependent on such industries also get hit because of non-payment, lower orders and so on. Thus, it becomes a financial and economic contagion. 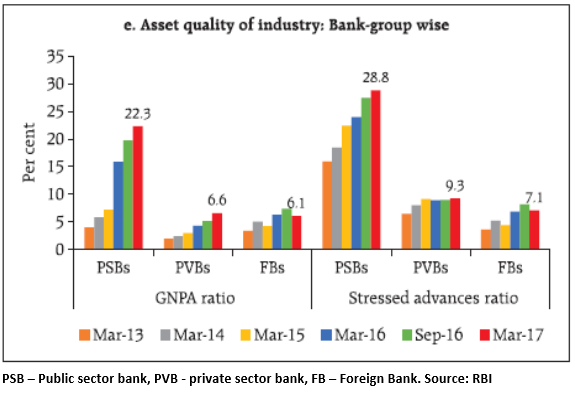 Sectors sag with the burden

The data below will tell you where the stress lies. Sectors such as metals, cements, textiles, auto and construction have a larger proportion of their loans in a stressed condition. And these are large sectors –  which means stress in these sectors will account for a chunk of the total loans as well. 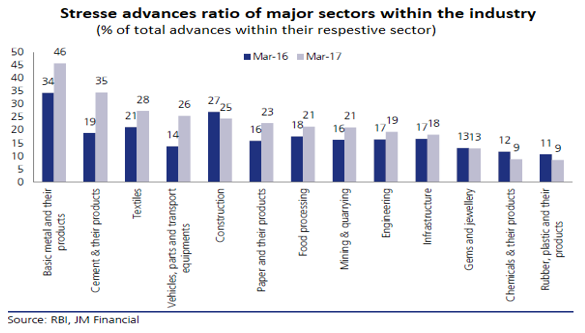 For example, infrastructure (power, road and telecom, in that order in terms of value) accounts for 34% of total bank lending and metals 15%. And that means high stress in these segments can really hurt banks and that has exactly been the case in the past few years.

What can recapitalisation do

While there are mixed views on whether recapitalisation will only help provide for stressed assets or make available fresh bank capital for lending, the clear first-order impact is that PSBs will be lighter without the burden of the stressed assets. That is fine and the present re-rating in the PSB stocks is towards that.

But think of the borrowers of these loans. Any write-off or sale of these stressed assets or any kind of lower burden could make a significant impact not just on their balances sheets but for the sector as well. How? Let’s take an example of steel sector: according to analyst reports close to 50% of the steel, capacity lies with companies that are under stressed assets of banks. If this is the case, large players like Tata Steel or JSW Steel or JSP could well look at inorganic growth (through asset acquisition/consolidation), rather than add capacities, especially at a time when infrastructure is set to take off. We took the example of metals as it accounts for a chunk of total lending by banks and has high NPAs. Similarly, take another stressed sector – power.

While asset sale has already been happening in this space, any freeing up of debt commitment of the power companies (if banks decide to take what is called a haircut whereby they settle for lesser than the lent amount) can help them provide more competitive tariffs that will encourage state electricity boards to draw power from these players. This can not only benefit power company themselves but also bring down the current spike in merchant power prices and reduce input cost at a time when companies are witnessing higher cost of sales.

Essentially, recapitalisation can also free up balance sheets of sectors (asset impairments notwithstanding) and lead to consolidation in select sectors where an uptick is imminent (steel, cement, infrastructure, capital goods etc.).

In short – the ripple effect of cleaning up balance sheet may mean asset creation or better asset utilization across various sectors. This is where the corporate earnings uptick story begins; not stopping with just a PSB revival.

Our earlier discussion on stressed assets and lower credit to infrastructure would have already made it clear that the road sector too, has not been receiving funds. After double-digit growth in credit until December 2014, credit to this sector dwindled to low single digits and then fell over the last 5 months ending September 2017 (graph below). 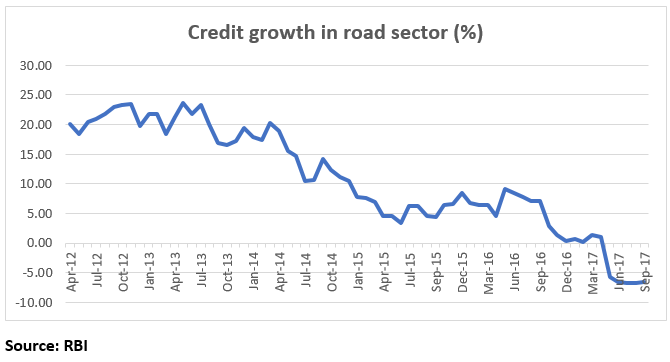 This came on the back of aggressive bidding and untested public-private partnership (PPP) models that failed. Analysts have therefore been opining that the current plan of 83,677 km of roads (45km/day), over the next 5 years is aggressive on two counts: one, private players may not actively participate given difficulties in forecasting traffic volumes (where there is toll sharing involved), their weak balance sheets and procedural hurdles of land acquisition and other clearances.

However, we think a few key points must be noted about the changing project award landscape and funding landscape in road projects: 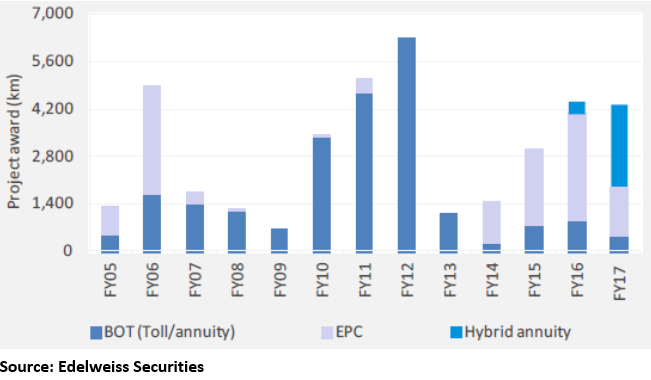 (Click here to go to Press Information Bureau and view the list of presentations at the end of the press release: http://pib.nic.in/newsite/PrintRelease.aspx?relid=171930)

Spending on roads has multiple impacts. One, it directly feeds into order uptick for cement, steel, capital goods and engineering sectors – all of which are part of highly stressed advances of banks. That means for these sectors, supply side (funding) may ease with lower debt and demand side (orders) too may pick up at the same time. Two, as Bharatmala focuses on bringing down road time of goods, through efficient connectivity, the impact in terms of improved logistics can be felt across several sectors in the long term.

Hence, in our opinion, the challenges notwithstanding, even a small uptick in this activity can act as a trigger (although road building of this order may not contribute significantly enough to GDP) for other economic activities.

Bank recapitalization and road outlay, in our opinion, may not create fresh private investment rapidly in the near term. But it can well spur higher and more efficient utilisation of capacity and we think that is good enough to push corporate earnings.

You will likely see the portfolios of fund managers shift positions, albeit with caution, towards many of these cyclical sectors, if they are not already invested in them. For you, the story is not about owning banking funds or banking stocks, it is about investing, and staying invested.

4 thoughts on “FundsIndia Views: Recapitalisation – Impact beyond the banking sector”