When we last reviewed UTI Transportation and Logistics fund (UTI T&L fund) in 2014, we mentioned that a sustained low inflation and low interest rate scenario would boost prospects for this fund. We think this scenario has begun and may continue for a few years at least. UTI Transportation & Logistics fund returned 20% and 32% compounded annually over the last 3 and 5 years respectively, beating all other theme sector funds. In this time frame, barring mid-cap funds, none of the other fund categories managed to outperform this fund, barring short phases. For a theme fund with a higher proportion of large-cap holdings, this performance is commendable. But is there more steam left in this theme? Read on to know.

The fund and suitability

UTI T&L is a broad-based theme fund that seeks to play both the consumption and investment macro themes in the economy through transportation and logistics sectors. In the transportation space, it buys into stocks of companies that are a play on urban and rural consumption (cars, two-wheelers, tractors and so on) and on the investment side it participates in sectors that are lead indicators of economic pick-up such as auto & auto components and logistics and allied sectors such as ports and containers.

Like any other sector/theme fund, UTI T&L too carries risk of high volatility. This is reflected in its high standard deviation. However, given its broader theme and that it plays both the consumption and investment story of the economy, it may be less volatile and less cyclical compared with few other themes such as infrastructure, pharma and banking. The fund is not suitable unless you have a high-risk appetite and want to take bets on sectors. It requires a time frame of 5 years and investing through SIP or through systematic transfer plans (STP) if you have lumpsums now.

Given that markets are trading at more than their historical average valuations, investing in equity in general and in theme funds specifically can be risky.

UTI T&L has a rare combination of themes that can play the consumption and investment story together. From being a narrow auto sector fund, until 2008, this fund then broadened its mandate to cover transport and logistics. Since then, it has managed to stay less volatile than most theme funds and only as volatile as broad market indices such as the Nifty 500.

Now, looking ahead, a theme such as this one may hold prospects for few key reasons: In the transportation space, companies that are in the B2C business – that is passenger vehicles – have been putting up a very strong show both in terms of volume and margins. In the past 2 years, B2C businesses, whether in the non-banking finance space or in the consumer discretionary space have seen a strong re-rating backed by steady volume and profit growth.

With growing market share and superior return on investments, stocks of some of the companies in the B2C auto space such as Maruti Suzuki or Eicher Motors or Hero MotoCorp are being picked by large institutional investors as a consumer play story. As a B2C play, these stocks appear to be at a discount (or show stronger growth) to the other re-rated B2C players from other sectors. To this extent, we think this part of the consumer play story is yet to play out fully.

Next, on the investment part of the portfolio – data for the first quarter of FY-18 from the Indian Ports Association suggests traffic growth has begun on a strong note. That means stocks in the ports, container and logistics space have heightened prospects; and so do commercial vehicles. This together with long-term prospects from projects such as the dedicated rail freight corridor (direct beneficiary being stock such as Container Corporation) expected by 2019-20 provide medium to long-term visibility to this space. The second part of the investment story is the auto and auto component sector, which is also to some extent a lead indicator of economic recovery. This part of the portfolio may help adequately capture the India growth story.

While banking sector is considered to capture economic upticks well, there are 3 reasons why the T&L space may be preferred at this point: one, banking sector is yet to fully recover from bad loans. Second, the uptick in the economy, this time around, may not necessarily start with corporate credit uptick (we are currently having low credit growth). By the time it does, some part of the growth story, driven by public spending, may already be over. Third, the low valuations in banking stocks have already prompted a rally in the banking index. Since November 2016, UTI T&L’s 1-year rolling return has been underperforming Bank Nifty. In other words, the fund has not run up as much as the banking sector in the current rally. Above all, the banking space receives adequate weight in almost all fund portfolios given that they have high representation in the bellwether indices. As opposed to this, the auto and transport space may not receive similar weights in a diversified fund.

After UTI Auto Sector fund broadened its mandate and rechristened itself as UTI T&L fund, the fund has been less volatile and has generated steady returns. For example, in the last 7 years, if you take any 3-year time frames (by rolling returns daily), the Nifty 500 or for that matter sector indices such as BSE Auto or Nifty Banking have few occasions of delivering negative returns. This fund did not deliver negative returns over such 3-year time frames. 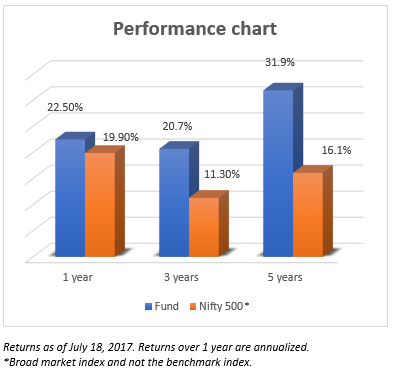 Over 1-year time frames the fund has negative returning periods, albeit lower than key indices. The fund has delivered negative 1-year returns 9% percent of the times in the last five years; although this is still lower than the Nifty 500’s record of 16%.

In 2011, the fund fell 19% when the Nifty fell 25% and other sector indices such as Nifty Banking fell by 33%. In 2015 when the market fell into the negative zone, the fund managed positive returns.  In 2017, thus far, the fund’s performance is not chart topping. It beat the broad market index year to date marginally but has lagged the banking index by a good 6 percentage points.

As a theme fund, UTI T&L does not undergo too much portfolio churn. Still, it accumulated stocks such as Bajaj Auto, Maruti Suzuki India, Tata Motors, Container Corporation of India (Concor) and Adani Ports & SEZ to name a few, in the last 1 year. Needless to say, most of the stocks barring a few such as Concor and Tata Motors, delivered well with a few low-key auto component stocks such as Sundaram Fasteners and Rane Holdings more than doubling in the past year. Ashok Leyland, which is now widely being expected to dethrone Tata Motors as the new market leader in high tonnage commercial vehicle was recently added.

The fund has seen some fund manager changes with the most recent one happening 9 months ago. It was earlier managed by Anoop Baskar & Daylynn Gerard Paul Pinto and then by the later (on Anoop’s exit) and now by Sachin Trivedi from October 2016.