A top-notch performance in the past two years has powered L&T India Value Fund to the top of the charts. The fund has no specific market-cap leaning, and can go anywhere depending on market conditions. It has used this freedom to the best advantage, moving heavily into mid-cap and small-cap stocks over 2014 and 2015. The fund has also seen its AUM shoot higher; its December 2015 AUM of Rs. 880 crore is leaps ahead of the Rs. 121 crore it was the previous December.

In the one, three, and five-year period (the fund was launched in January 2010 by the Fidelity stable), L&T India Value Fund ranks among the top two in the diversified or multi-cap funds category. Its five-year 17.3 per cent return leaves its benchmark, BSE 200’s, 6.4 per cent return in the dust.

Given its flexible mandate, freedom to pick relatively small stocks, and high volatility, the fund is suitable for investors with a high-risk appetite. L&T India Value Fund is also yet to weather a prolonged downward market cycle.

L&T India Value Fund delivered less than the benchmark and category average for a stretch in 2011. This is partly attributable to the fund’s launch in 2010, when markets were still in their bullish mood. In the sideways 2013 market, the fund fared reasonably well – its 13.5 per cent loss was a good bit better than the average category loss, and slightly lower than the benchmark loss. 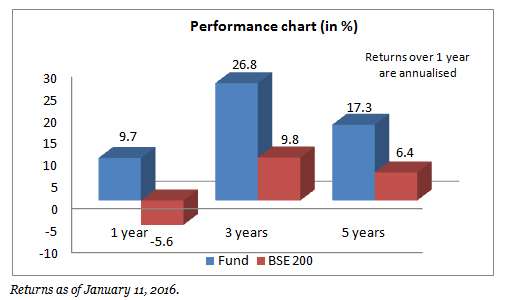 Rolling three-year returns daily since its inception reveals that L&T India Value Fund beat the BSE 200 all the time. The fund’s volatility is, however, on the higher side. This is partly explained by its shifting between market capitalisations (other go-anywhere funds such as Franklin India High Growth Companies and Reliance Equity Opportunities have similar standard deviations) and the high holding of mid-cap and small-cap stocks. For the risk it takes, the fund has delivered commensurate returns.

Given that mid-caps and small-caps offered better valuations, especially in the period in 2013 (since they hadn’t recouped their losses from the 2008 crash as much as large-caps did), the fund shifted its portfolio there. Large-cap stocks accounted for around 30-40 per cent of the portfolio through 2014 and 2015.

The fund is similarly dynamic in its sector and stock choices. In 2013, for instance, sector weights were reasonably concentrated, and swiftly churned as well. Banking accounted for around 20 per cent for quite a time before being cut sharply as sentiment soured. Software took up 10 per cent, upped later to 18 per cent. Individual stocks often accounted for 4-6 per cent of the portfolio. 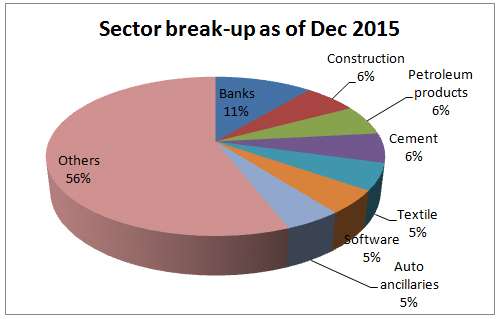 By 2015, concentration in both sectors and stocks were more diffused, though still deftly juggled. Banking, while remaining the heaviest weight, had only an 11 per cent allocation by December 2015. The sectors that followed (encompassing a wide range of software, pharmaceuticals, textiles, capital goods, construction, cement, petroleum, financials, and auto ancillaries) all had weights of 5-8 per cent only. Few stocks accounted for more than 4 per cent of the portfolio. Over the past three months, given the overheated mid-cap space and the lack of value stocks, the fund has shifted up to 14 per cent of its portfolio into cash.

The fund bagged a fair number of winners over the past year – FAG Bearings, Ahluwalia Contracts, KNR Construction, BEL, and Wabco India, to name a few. Its current portfolio tends towards cyclical sectors, which can revive if growth picks up as anticipated, with some exposure to consumer and defensive sectors such as auto, pharma, software, textiles, and finance.

The fund is managed by Venugopal Manghat and Abhijeet Dakshikar.

News reports suggest that the AMC has recently started considering a partial stake sale to raise capital. In such an event, there could be changes in investment and stock selection processes across all the AMC’s funds depending on the new partner. L&T India Value Fund, however, has a good strategy in place, and has delivered consistently well. Thus, it remains a good bet. We will revisit this call if such an event happens and if there is any process change that can affect the fund.