If there is one fund that is perfect for a long-term portfolio, it is Franklin India Bluechip Fund. This equity fund delivers stable returns, stays true to its mandate of investing only in large-cap stocks, and picks only those stocks that have good growth prospects, reasonable valuations, and good governance.

Franklin India Bluechip’s returns will not always be at the top of the pack. During bull markets, several peers overtake this fund by a sizeable margin. In beating its peers, the fund may not always deliver. But three factors make it a great fit for long-term portfolios.

The first is its stability. Compared to its large-cap peers, Franklin India Bluechip has the lowest volatility (measured by standard deviation) in its returns. The second is its ability to protect returns during bear markets. Part of the reason its volatility is low is because the fund is able to contain losses much better than both its benchmark and its peers in declining markets. It has clocked among the smallest losses in 2008, 2011, and even in the 2015 large-cap rout. The third is its consistency over the long term. Rolling five-year returns since its inception in 1993 has the fund beating its benchmark – the Sensex – nearly all the time. That’s a shining record of consistent, long-term performance. There isn’t any five-year period since inception where the fund has suffered a loss.

Solid in the long-term 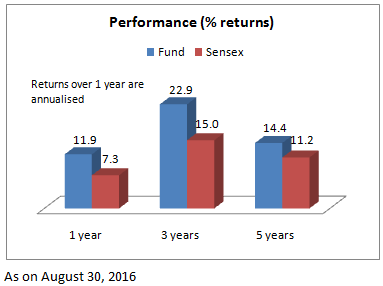 In one, three, and five-year periods Franklin India Bluechip has beaten the Sensex by 3 to 8 percentage points. However, the fund can dip in the short to medium-term. This is due to its mandate of investing only in blue-chips, and a long-term view in stock selection with a focus on valuations and quality.

Since it restricts itself to large-caps, returns fall short of peers in rallying markets. Most large-cap funds do move 10-15 per cent (in the recent rally, it is even higher for some funds), into mid-cap stocks. In the year to date, for example, the fund’s 13.2% return is quite a bit away from the 15% of the chart toppers. In the 2013-15 rally, its 78% return was short of the category’s average 86%, but still far better than the Sensex’s 65%.

Also causing bouts of short-term under-performance is its buy-and-hold investment style. The fund picks stocks that are reasonably valued and are quality companies. Further, the large-cap mandate may also prevent it from picking winners as other funds do in themes such as infrastructure, engineering, auto ancillaries, consumer durables, and industrials, where opportunities are mostly in mid-caps.

Over the long-term however, the fund scores very well. Rolling five-year returns daily over the past ten years shows that the fund has beaten its benchmark, the Sensex, all the time, and by a good margin. The average of these rolling returns at 21.2% is among the best in its category, despite its conservative and large-cap mandate. Funds such as HDFC Top 200 and HDFC Equity, which also deliver high long-term returns, are much more volatile and tend to have longer periods of under-performance. Franklin India Bluechip has a winning combination of low volatility while still maintaining above-average risk-adjusted returns (measured by Sharpe).

Holdings
The fund does not churn sector and stock exposures too much. It gradually increases or drops weights of both stocks and sectors. Individual stock holding can be slightly higher at 7-8 % of the portfolio.

Currently, the fund is betting on a banking turnaround. It mostly holds private sector banks such as HDFC Bank, Yes Bank, IndusInd Bank and Axis Bank. This gives it a play on both consumption and cyclical revival. Cyclical plays also include the conglomerate Larsen & Toubro, large cement players, and some energy plays such as Reliance Industries, Power Grid Corporation, and ONGC. 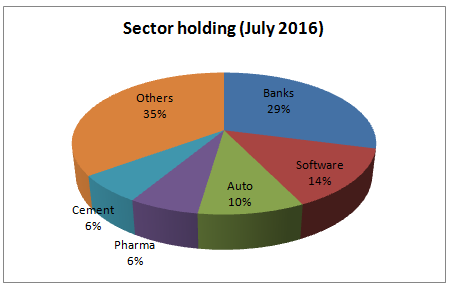 Given the dwindling prospects of software, the fund’s holding in that sector is down, as is the case in pharmaceuticals. Instead, it has increased holdings in automobiles and consumer non-durables over the past year. It has also slightly increased cash to 6.6% of the portfolio now, given the uneasy state of the markets. The portfolio is thus a good balance between defensives, consumption, and the long-term cyclical theme.

The fund has an AUM of Rs 7,636 crore. Anand Radhakrishnan and Roshi Jain are the fund’s managers.