Large Cap Funds – It ain’t over till it’s over

A few years back before the days of app-based auto booking (such as Uber, Ola etc.), I used to pay anywhere between ₹200- ₹300 to travel the 8 km stretch from my home to office in Chennai. The price was determined based on the whims and fancies of the auto driver. I had no way to know if the next one would be cheaper or how long it will take for me to get the next one. 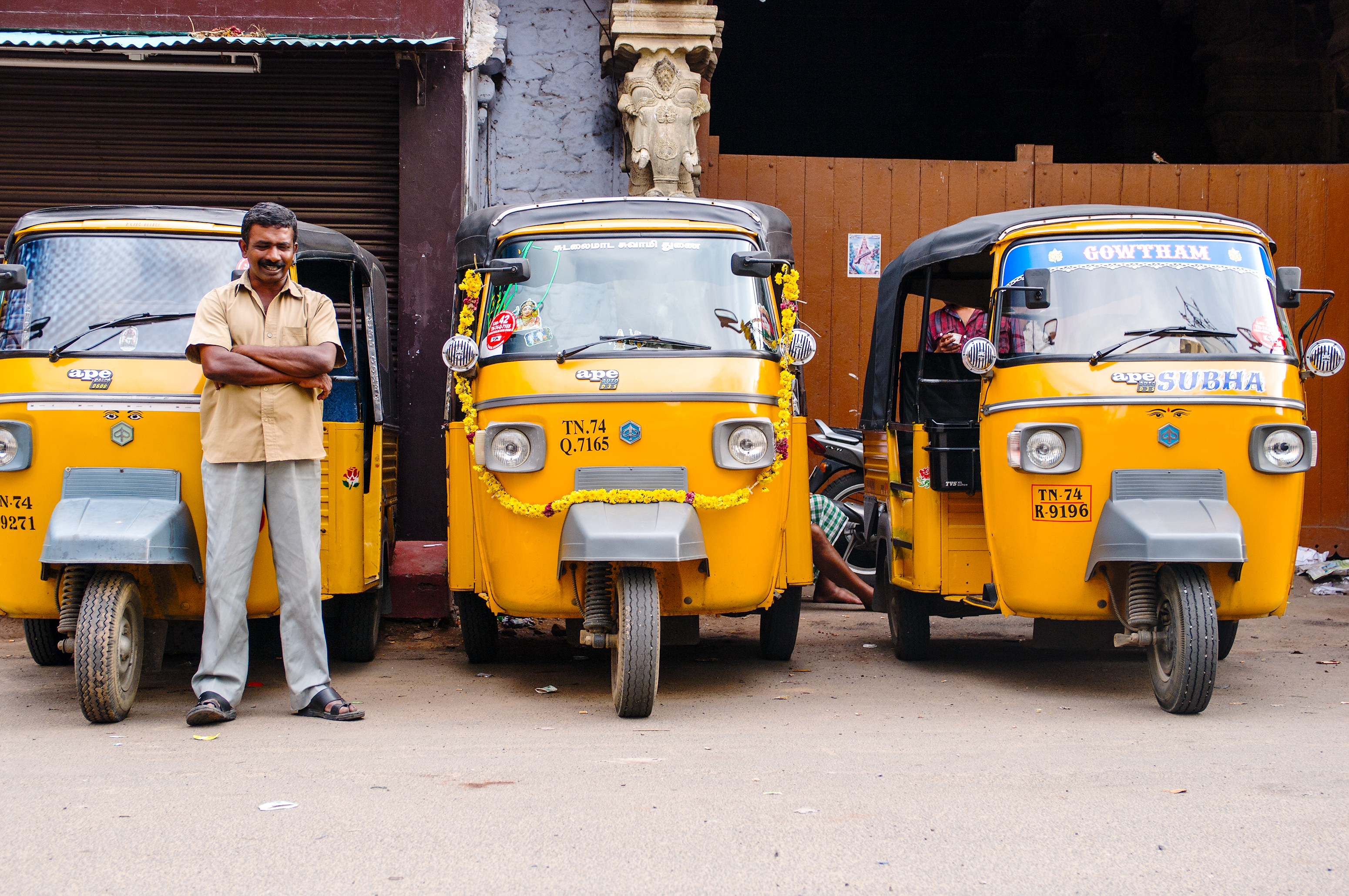 But post the advent of OLA and UBER, the cost has dramatically come down to ₹100-150 (ignoring the surge pricing).

The auto drivers ability to exploit the inefficiency in the system and make more money with fewer rides has dramatically reduced. While there are still some auto drivers who end up charging exorbitant rates to people who do not use the apps, as more people start using the apps the ability of drivers to get charge extra comes down. Most auto drivers are forced to charge similar amounts as pricing information is available across most of the customers via the apps.

So the more the number of people using apps, the more it becomes difficult for auto drivers to take advantage by charging exorbitant prices.

A similar case can be made for the stock markets.

Improvement in technology has significantly improved access to information on stocks. As more number of highly skilled investment professionals enter the markets, they have more advanced training, better analytical tools and faster access to more information than their predecessors.

As the market gets dominated by professional investors, as opposed to retail investors, it becomes difficult for active fund managers to gain any information or analytical edge over their peers in such a well-researched space.

Over the coming years, active fund managers (portfolio managers who select securities in an attempt to deliver higher returns than a benchmark index) will find it incrementally more difficult to generate outperformance over their benchmarks.

Globally, this trend has already started playing out with the majority of active funds underperforming passive funds across several countries.

Thus it is reasonable to assume that this trend will eventually play out in India.

Is it still early days or should we move from active to passive immediately?

Logically, the well researched large cap segment should be where the first signs of active vs passive underperformance show up.

What is the current status of Indian Large cap funds?

The SPIVA (S&P Indices Versus Active) is a globally recognized scorecard, that tracks how professional active fund managers are doing against their respective index in various countries.

According to the 2019 SPIVA India report, only 39% of large cap funds beat their benchmarks over the past 10 years. This figure becomes more alarming at 17% over the past three years.

However, there are two common criticisms against the S&P Dow Jones SPIVA report

1. The SPIVA report is getting skewed by the recent underperformance of actively managed funds over the past 2 years. If you exclude this period, the percentage of outperforming funds is much higher.

Let us go back and check the 2017 year-end SPIVA report to verify this.

2. Since it shows the count of the number of funds outperforming the index, small-sized badly managed funds can pull down the result. The majority of investors are usually in a few large funds and most of them have managed to beat the index over longer time frames.

SPIVA also provides the asset-weighted returns for the last 10, 5, 3 and 1 year.

Once we factor in the asset-weighted returns, the picture changes. On a 10 year basis, the large cap active fund universe has outperformed the benchmark. The 5,3,1 year performance has been impacted by the recent underperformance of active funds in the last 2 years.

The other way to analyse this is to use a rolling return analysis, which removes the skew from the most recent data.

Obviously, while the outperformance is not earth-shattering, the message is that, at the aggregate asset-weighted level, large cap active funds are still beating their benchmarks.

So looks like the evidence is still tilted in favour of active funds at the current juncture.

But what about the degree of outperformance? Is it gradually coming down?

Let us find out… 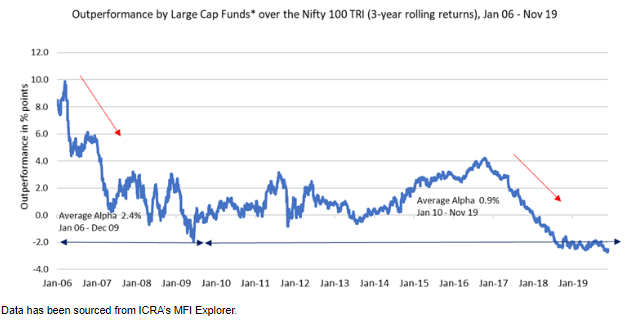 In the period between 2003-09 most funds have created reasonable outperformance. However post 2010, the outperformance (or alpha) has started to reduce. But again sometimes averages tend to hide the details.

While we are obviously cherry-picking, if the trend of lower alpha and underperformance is reflected even for these funds then this might be an early sign of an eventual reduction in alpha.

Oops! Even across the best performers, there has been a sudden sharp deterioration in outperformance across in the last 2 years.

This is obviously worrisome.

But before you jump into a conclusion, there is one more question we need to answer.

Why is there a sharp and sudden deterioration in outperformance?

More than what meets the eye

Globally the evidence is overwhelming that active fund managers are finding it extremely difficult to beat the indices. So the immediate response is usually to paint the recent underperformance with the same brush and conclude that the global trend has started to play out in India.

While we agree that this will eventually be the story over the next decade but we expect this to be more gradual. However, the underperformance seems too sudden and sharp.

Are we missing something?

In our view, there are two key underlying trends which can give you the much-needed context behind the sudden sharp segment wide underperformance. This will also help you take a more pragmatic stance on the passive vs active debate at the current juncture.

Did you notice something?

The underperformance of mid and small caps versus large caps is close to historic lows.

Large caps funds usually are not 100% in large caps. They have around 10-20% exposure to mid and small cap stocks.

So given the mid and small cap exposure, most of the large cap funds have got impacted compared to their pure-play large cap indices.

To ignore this cyclicality and extrapolate the same underperformance going forward, would not be prudent.

So, in our view going by history, we expect the reversion to happen going forward over the next 3-5 years and active large cap funds are likely to have a positive upside from their mid and small cap exposure. (similar to what they had during the 2014-17 period)

Usually, it is noticed that the concentrated Nifty 50 TRI and the well-diversified Nifty 50 Equal Weighted TRI index have historically provided similar returns over the long run.

However, in the short run, they go through intermittent periods of outperformance and underperformance vs each other.

As seen below, the performance differential is at an all-time low for the Nifty 50 equal-weighted index, indicating the significant polarisation in the top 10 stocks of the index.

Due to this, large caps funds given their wider diversification have got impacted compared to their concentrated benchmarks.

Going forward, as and when performance becomes more broad-based across the large cap segment, the more diversified large cap funds will be at an advantage versus their more concentrated benchmarks.

Putting all this together, what does all this mean for you?

What is our short term view? 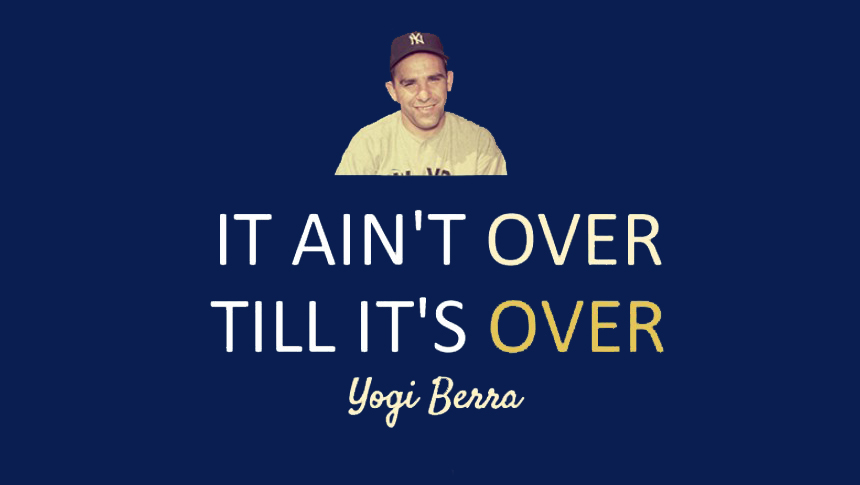 1. Given that we are close to cyclical lows both in terms of

whenever there is a trend reversal over the next 3-5 years, there can be a period where large cap funds outperform their benchmarks

2. Investors currently invested in well managed large cap funds with a consistent track record and proven fund managers can still get alpha (outperformance vs benchmark) over the next 3-5 years

What is our long term view?

Both concentration and contrarian strategies while can work over longer periods, will be difficult for investors to stay invested especially during short term underperformance periods as there will be significant performance differential vs benchmark

Post the recent SEBI re-categorisation, the flexibility to increase mid and small cap exposure in large caps is capped at 20% of the portfolio. So this lever is constrained.

From this perspective, we think multi cap funds with large cap bias which have more flexibility in adding mid and small caps will be a better alternative for pure large cap funds from a longer-term perspective.