When markets are doing well, it not only attracts new investors but also motivates exiting investors to stay invested. But stock markets do not move upward always. What happens when there is a correction? This article explores the typical investor behaviour in markets up and downs and makes a case on why investors need to hold on, not just in an upmarket but in a downturn as well.

Everybody wants to join the party

When the stock markets are doing well, they attract more money from investors and attract new investors.

If you look at the inflow data for equity and tax-saving mutual funds given below, you will see that the last few years has seen more money coming into the stock market, through mutual funds. 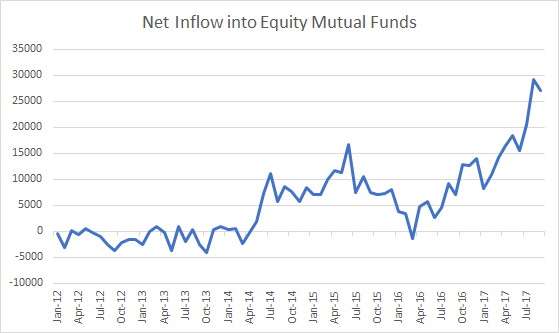 But when you enter the markets during an up move, it is likely that you would not have been part of any earlier market correction. Hence, you may not know that markets cannot remain unidirectional – just trending up.

Does this mean that investors should not enter the markets during a bull phase? No.

First, nobody knows whether they are entering in a bull market or whether market is going to slip or move up after they enter. Second, rather than postpone investment, it is better to enter the market as and when you have investible surplus. Markets cannot be perennially moving up and you will have to handle the falls too. If you prepare yourself for such volatility, you can build wealth without exiting it halfway.

Market euphoria, especially after a sustained bull run, often ends with a major correction. The sudden correction can cause panic among inexperienced investors. This triggers panic selling as you want to keep your capital safe. Such panic selling can leave a permanent dislike for equity markets, thus losing out on a vital wealth building asset class.

Look at the graph below. There were approximately 4.7 crore active mutual fund folios held by retail investors around November 2009. This number started falling once the market generated some profits after the 2008 crash. Investors who were rattled by the 2008 correction and those believed they had better take their money out before another crisis started to close their investments. As can be seen in the graph, it took almost 7 years (September 2016) for the number of folios to touch the earlier peak.

But the market recovered long before investors came in. The market entered another bull phase in end 2013 and now we hear about fresh highs every few weeks. Investors who quit after 2008 got left out. Investors who stayed invested, reaped the rewards as their investments are now at a higher level. Investors who continued investing benefited even more as they bought at the lows and are now enjoying the high returns of the past 4 years.

How have markets fallen in the past and how did they revive? You need to know this to realise that exiting the market and trying to time exit and entry is not a good idea.

As you can see from the above table, in the aftermath of each of the crises, the journey to the next peak has seen the money doubling in many instances. These returns have come within the next three years. The exception here is after 2001, where, owing to brief corrections in 2004 and 2006, the next actual peak was in 2008. This long bull run yielded 514% (money multiplying over 6 times).

The time you spend in the market also makes a difference. For example, anyone who had invested right after the Russian crisis would have more than trebled their money in the succeeding ten years. Yes, you would have invested at a low, but remember that this return was despite the market contracting 60% in 2008 after the US housing mortgage bubble burst.

Similarly, an investment in the market post the dotcom bubble would have seen your money grow over 5 times in the next ten years despite the 2008 crash.

There’s a lesson in this. People who have observed the market for long periods know one thing – the market will bounce back. Corrections are not perpetual. Depending on the quantum of the correction, the recovery might take some time. But it is not possible for the market to not recover. Why do we say this? Because a market correction only makes good companies more attractive and brings back the potential in them. Also, any downturn caused by any hit in an economy, geo-political turmoil, financial crisis, or a natural disaster, are never permanent. There is a revival.

Equity markets are meant for long term investments. The mistake people make is they look at short term returns, especially during bull phases and imagine themselves earning the same super-normal returns in the next few years. They tend to exit if such returns do not come by in the short term.

As equity investors you will do well to remember the following: