Does spreading your SIP over the month help?

Systematic investment plans help you make the most of market volatility, average out your costs, remove the need for market timing, and, in all this, bump up your returns. By that logic, wouldn’t it be better to divvy up the amount into smaller bits and invest it at various points through the month, instead of at one go at the beginning? That’s a question quite a few of you have asked us. After all, markets are volatile over the course of a month just as much as over a year.

Well, we checked the numbers and here’s your answer. Splitting up your investments over the month doesn’t help improve your returns. It doesn’t matter whether your investment period is five years or ten. A SIP investment made once a month returns just as much as a SIP investment five times a month.

So how did we work this out? We assumed that you had Rs 40,000 to invest in a month (note that the actual amount does not matter; the results will remain the same). In the first scenario, you made the investment on the 5th of each month. In the second scenario, you invested Rs 8,000 on the 5th, 10th, 15th, 20th and 25th of each month. In both scenarios, the period of investment was from July 2010 to July 2015.

Simply assuming that you invested in the BSE 100, the IRR of your investment today works out to 13.3 per cent in the first scenario and 13.1 per cent in the second. Not much of a difference, is there? 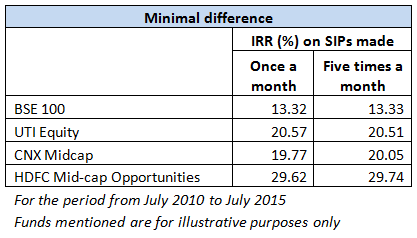 Even considering a moderate-risk large-cap fund, say, UTI Equity, the yield on monthly investments works out to be almost exactly that as the five-times-a-month route. See the accompanying table. Stretching the period to 10 years instead of five to allow more time for cost averaging benefits again yields the same results.

The market has not swung wildly often enough each week for benefits to accrue from investing across the month. Taking the weekly movements of the CNX Nifty or CNX 500 indices over the past ten years, the index made gains or losses of a significant margin less than half the time. This proportion is almost the same when monthly movements are calculated. As a result, you are not gaining much even if you spread investments over the course of a month.

You could argue that a large-cap fund sees lower volatility. If you recall, 2010 to 2015 has been a period marked by steep gyrations by mid-cap stocks. So can spreading out investments be effective for mid-cap funds, as they see sharper movements? Not quite.

Take the CNX Midcap index. The yield on making investments five times a month is only very slightly higher at 20.05 per cent compared to the 19.77 per cent made on monthly investments over the past five years. Running a check on HDFC Mid-cap Opportunities mirrors this same trend. The results are the same whether you invested Rs 40,000 or Rs 20,000 or any other amount.

So while it may calm your mind that you are tempering risk by staggering investments over the month, there is no clear benefit in doing so. More, you already will have several bills to deal with through the month – utilities, phone, groceries and household expenses, entertainment and so on. Weekly mutual fund investments, besides other investments such as recurring deposits will simply complicate the management of your cash flows more. Monthly SIPs are simpler and more manageable.