If you are looking for a place to park your money for around three years and you want higher returns without upping the risk level too much, UTI MIS Advantage is a good fit. A debt-oriented hybrid fund (or MIP), it holds 75-80 per cent of its portfolio in corporate and government debt instruments that yield higher than fixed deposits. The remaining portfolio is in equities. Given that corporate and economic fundamentals do point to healthy growth, the equity exposure will help give returns a kicker over the medium term.

In the three-year and five-year periods, UTI Advantage’s returns are 1 to 2 percentage points above the category’s average. In both equity and debt, the fund is not aggressive, unlike funds such as ICICI Pru MIP 25 and Birla Sun Life MIP II Wealth 25. Despite this, it delivers among the best risk-adjusted return in its category.

Since its inception, the fund’s three-year return has nearly always held above its benchmark CRISIL MIP Blended Index, pointing to a good record of consistent performance. Owing to the equity exposure and average maturity of its debt portfolio, the fund requires a holding period of three years to deliver the best returns, and for tax-efficiency.
The fund is treated as a debt fund for tax purposes. For holding periods of less than 3 years, it is taxed at your slab rate. It will be taxed at 20 per cent after indexation benefit if held for 3 years or more.

Performance
In the three and five-year periods, the fund’s returns are in the top quartile in its category. Rolling its three-year returns every day over the past ten years, the fund’s average return of 10.1 per cent is among the highest. Fixed deposits would have delivered a maximum of 9.25 per cent, pre-tax for a three-year period, going by interest rates since 2006. 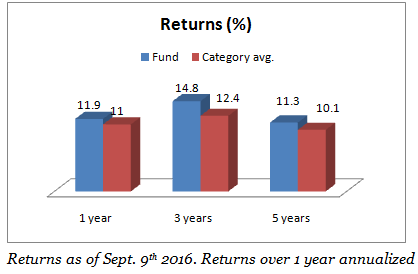 In containing downsides too, UTI Advantage has proved its mettle. In the past ten years, its rolling one-year returns have slipped into the negative zone 5 per cent of the time, better than funds such as HDFC MIP LTP, ICICI Pru MIP 25, Franklin MIP, and Birla Sun Life Wealth 25 that saw negative returns 7-9 per cent of the time. These funds have similar equity exposures.

The period of negative returns for UTI Advantage was also only in the last few months of 2008 when equity markets were in free-fall. The fund had also not held gilts then and so missed that rally. Other funds, despite holding gilts, still managed to clock losses. Some funds dropped briefly into losses in even early 2016.

The occurrence of negative returns does show that MIPs are not without risk. But holding for the minimum 2-3 year period removes this probability; MIPs haven’t delivered negative returns when held for two years or more. Even at its lowest point, UTI Advantage was still better than most in its category.

Strategy
UTI Advantage has mostly followed an accrual strategy, being far less aggressive a fund. Peers have often taken aggressive duration calls. UTI Advantage’s average portfolio maturity has been 3-4 years. Only in 2015 did the fund up gilt exposure. Even so, at around 35-48 per cent, the gilt holding is much lower than peers that went beyond 50-55 per cent in gilts. This did result in lower returns in the past year; its one-year returns of 11.9 per cent pales in comparison to the chart-topping 17 per cent. Still, UTI Advantage has held above category average at all times. Given that some of the gilt rally has played out, the fund cut exposure to 32 per cent of its portfolio now from the 48 per cent it was at the start of this year.

The fund upped exposure to corporate debt holding instead; in top-rated papers. The share of AA-rated papers has dropped steadily from 35 per cent of the debt exposure last July to 12 per cent now. The fund has always held a mix of AAA and AA rated papers and juggles this exposure depending on the market.

The equity portion has accounted for 20-25 per cent of the portfolio on an average. Holding is diffused, with individual stocks rarely making up more than 1.5 per cent of the portfolio. While the bias is towards large-caps, it does hold some mid-cap stocks. Given the marginal exposure to each stock, however, a mid-cap correction should not hurt too much. It cut holding in software stocks in favour of consumer goods and financials, which should serve it well.

UTI MIS Advantage has an AUM of Rs 725 crore. Amandeep Chopra and Ajay Tyagi are the fund’s debt and equity managers, respectively.