A large-cap equity fund, SBI Bluechip holds strong among its peers. In the 3-year and 5-year periods, its returns are above the category average by a good margin of 4 percentage points. This fund has a highly consistent long-term record by keeping the volatility in its returns under check. It does not also hesitate to move part of its portfolio into cash if markets lack opportunity.

SBI Bluechip can also put 14-18% of its portfolio into mid-cap stocks. At this time, when quality mid-cap stocks at acceptable valuations are hard to find, this measured exposure will help you adequately participate in the mid-cap space with lower risk. The fund is a good fit for moderate or high-risk investors with a long-term horizon.

Scoring on all counts

SBI Bluechip has been on a steady path of improvement from 2011 onwards. It managed to beat the large-cap category and the BSE 100 index in every market cycle that followed – the uptick in 2012, the uneven market of 2013, the strong rally up until 2015, and the volatile market of 2016. Against the BSE 100, the fund has done better almost all the time when rolling 3-year returns over the past 5 years. Against its category in the same period, it has beaten the average 82% of the time. The fund has similar numbers in the shorter term as well. On consistency, the fund is close to the best in the category, well above most peers.

Where SBI Bluechip also scores especially well is on Sharpe, which measures the return payoff for the risk taken. On this metric, the fund is the best in the large-cap category. Further, while SBI Bluechip had earlier been more volatile, it has brought volatility down over the past couple of years. A higher cash holding also helped cap volatility. 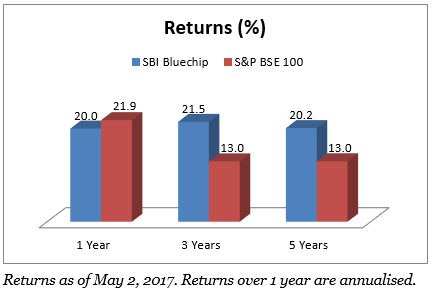 This cash holding – at around 15.8% on an average in the past six months – helped contain losses when the market tanked post-November. But it also caused returns to pale comparatively in the rally of the past few weeks, sending the 1-year return below the BSE 100. The fund has dropped equity exposure to 88-90% during uncertain periods such as late 2011, early 2013 and so on, but not as much as it has now. In contrast, large-cap funds have about 4-5% of their portfolio in cash.

Still, markets continue to be overvalued and bouts of volatility may unfold over the next few months on global events, corporate earnings, GST impact, monsoons, and economic growth. This higher cash holding may give the fund more buying opportunities or help contain losses if markets correct. The fund, by mandate, can go up to 30% in cash or money market instruments.

The fund tends towards a growth-oriented investment style – which could also help explain the higher cash holding as stock valuations grew expensive and cyclical sectors still lack clarity in growth outlooks. Mid-caps have made up about 13-15% of the portfolio over the past few years. Apart from the top couple of holdings, individual stocks do not usually make up more than 5% of the portfolio. 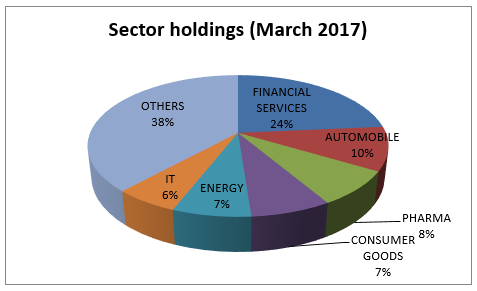 SBI Bluechip is among the few large-cap funds that are severely underweight on banks and financials, with the sector accounting for 24% of the portfolio. In this space, the fund primarily holds the less-risky retail-oriented stocks such as HDFC, HDFC Bank, Kotak Mahindra Bank, and IndusInd bank.

Large-cap funds, on an average, have about 30% in banks and financials. The lower bank exposure could be a prudent move, given that banks may see further trouble on the bad loans and provisioning front with the Reserve Bank getting stricter. In fact, SBI Bluechip has not leant towards financial institutions significantly even during periods such as 2014. The fund used other sectors, such as energy, automobiles, consumer goods, pharmaceuticals and so on to generate its returns.

While sectors such as cement did form a good 5-6% of SBI Bluechip’s portfolio for much of 2016, this holding was cut after the November demonetisation move. The fund instead is using construction stocks such as conglomerate Larsen & Toubro to play the infrastructure theme. It has also maintained holding in energy stocks, with Reliance Industries’ stellar run paying off well. Along with exposure to metals and mining through stocks such as Coal India and Hindalco and smaller engineering plays, the fund holds a good exposure to cyclical stocks. SBI Bluechip’s portfolio is also set to benefit from the rural and the overall consumption theme, through sectors such as automobiles, FMCG, fertilisers, and agro-chemicals.

Invest in SBI Bluechip Fund Now!
Talk to an Advisor