Performance pick-up over the past year. Among the few funds that are beating their benchmarks on a 1-year basis.

Among multicap funds today, UTI Equity holds a 1-year return of 3.8% at a time when most peers and the Nifty 500 TRI are sporting losses. This is a far cry from last February, when UTI Equity ranked in the bottom quartile on a 1-year basis, languishing below the Nifty 500 TRI.

Profit booking and exiting underperformers, as well as staying away from the more beaten-down sectors, helped performance. However, the fund’s long stretch of underperformance continues to subdue longer-term returns. The fund’s ability to maintain outperformance remains to be seen as well.

UTI Equity is a multicap fund, under SEBI’s categorisation. The fund has maintained large-cap exposure at 61% of its portfolio over the past year, with 26% in midcap stocks. It aims at maintaining a large-cap allocation between 60-70%. To this extent, the fund is more aggressive than other multicap funds such as Franklin India Equity, Kotak Standard Multicap, or Mirae Asset India Equity.

Earlier, the fund followed a value-based strategy. Sectors such as cement, construction, power, telecom, mining, and petroleum formed a large portion of the portfolio. In 2016, post a fund-manager change, stock picking strategy changed to a growth-based one. It placed higher importance on track record in and ability to sustain cash flow generation, higher return on capital and equity, higher earnings growth and visibility over the long term, stable management, higher quality, and so on.

This saw it pull out of several cyclical stocks and sectors which had until then been a part of the portfolio, but which didn’t meet its criteria. Instead, it moved into high-growth, high-valuation stocks. UTI Equity’s December portfolio sports an ROE of 20.7% and a PE ratio of 38.2 times against the Nifty 200’s (benchmark) 18.5% and 27.3 times. 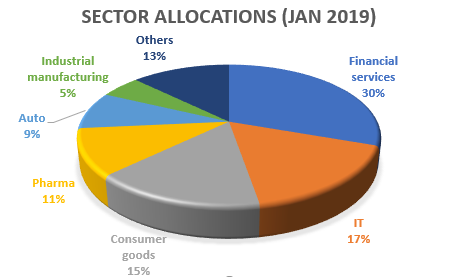 Value strategy and most cyclical sectors/stocks have borne the brunt of the market correction that began in 2018. Various consumption and high-quality stocks held up, as did defensive software and some pharma stocks. UTI Equity’s timed move out of underperformers and into the high growth and defensives over 2016 and 2017 helped it recover over the past year.

Stocks such as Ramco Cements, Ultra Tech Cement, IRB Infra, JSW Steel, KEC International, Bharti Airtel, Wabco, Coal India, and NCC exited the portfolio over 2016. Several of these stocks had already been weighing performance down. It exited oil & gas stocks such as IOCL and BPCL. Energy as a sector finds no place in the portfolio. Peer funds had held these stocks; the steep fall in this sector over the past year pulled down their returns. It booked profits in stocks such as Zee Entertainment, Bajaj Auto, and Hindustan Unilever.

Focus on cash flows and ROEs can sometimes result in adding to beaten-down stocks too. For instance, it added software stocks in 2017, which was a “cheap” sector then, but which gained well over 2018. It held outperforming pharma and diagnostics stocks. It has gradually been adding to Maruti Suzuki, Motherson Sumi, Amara Raja Batteries, and Shree Cement over the past year.

Its strategy doesn’t mean a complete exclusion of cyclical stocks. The stock-specific approach saw the fund picking up industrial & manufacturing stocks such as Astral Polytechnik, Grindwell Norton, and Schaeffler India. Some of these have gained well even over last year.

UTI Equity’s 1-year returns began pushing past the Nifty 500 TRI since April 2018. From trailing the index by an average of 6 percentage points over 2016-2017, the fund is now outperforming the index by a similar margin. 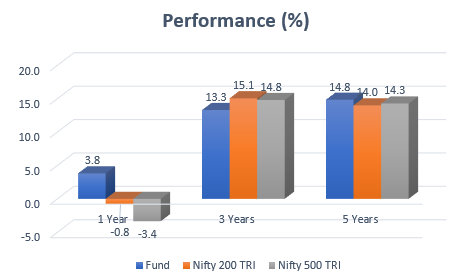 Returns as of 19th February 2019. Returns over 1 year are annualised.

Since the recovery is still nascent, its consistency record is yet to match that of its peers. Rolling 1-year returns for 3 years has the fund beating the Nifty 500 TRI just 42% of the time. On longer 3-year periods, the fund lags the Nifty 500 TRI and several peers. Rolling 3-year returns over 5 years show the fund beating the index about 74% of the time. Both long-term and short-term consistency metrics are well below peers such as Mirae Asset India Equity, Kotak Standard Multicap, or HDFC Capital Builder. UTI Equity’s risk-adjusted return, measured by the Sharpe ratio, has only just recovered to above-average. Its ability to contain downsides is also yet to match up to its more consistent peers.

UTI Equity’s strategy shift was at a time when markets began placing more importance on quality and earnings visibility. While high-growth and quality are less prone to bursts of underperformance than a value-rooted strategy, the fund’s ability to sustain outperformance remains to be seen. If markets turn tide later this year post elections and pick up the beaten-down sectors, the fund’s recovery may slow. Ajay Tyagi is the fund’s manager. UTI Equity’s AUM is Rs 8526 crore.