With a one-year return of 28.3 per cent, ICICI Prudential Top 100 is almost at the top of the chart for large-cap equity funds. It beats its benchmark Nifty 50 by a wide margin of 12 percentage points, and the category average by 7 percentage points.

However, the fund has had trouble beating the category over the longer term having suffered a prolonged bout of underperformance in 2015. The value-oriented investment approach is responsible for the underperformance, with stock calls taking time to show up in returns. While returns are now up, the fund is yet to regain its standing in terms of risk-adjusted returns and volatility.

The fund, though benchmarked to the Nifty 50, takes a fair amount of mid-cap calls to the tune of 15-18 per cent of the portfolio. A better comparison would thus be the Nifty 100 index. Against this index, the fund does not stick to benchmark weights and can go well overweight or underweight to the index. It takes concentrated calls in both sector and stocks, with the top 10 stocks making up 45 to 55 per cent of the portfolio. As a result, a top pick taking time to deliver significantly impacts performance. While ICICI Prudential Focused Bluechip also takes concentrated bets, the fund is completely oriented towards large-cap stocks and does not take mid-cap calls.

ICICI Pru Top 100 adopts a value-oriented stock picking strategy, in line with the style of Sankaran Naren, the fund’s manager. For instance, it stayed away from preferred sectors such as autos and media. Recently, it picked up the shunned pharmaceutical and telecom sector, besides smaller plays such as chemicals. It does not have cement stocks, which is what most other funds prefer to play both consumption and infrastructure revival.

It is instead playing infrastructure through stocks such as L&T, Ashoka Buildcon, and Tata Steel, apart from energy stocks such as NTPC, Power Grid Corp., Tata Power, petroleum, and metal stocks. In fact, energy and metals featured heavily in the fund’s portfolio back from 2014 itself. While this worked well in 2014, the 2015 period saw the sectors slump. The massive rally in 2016 in these sectors propelled the fund’s stellar returns. 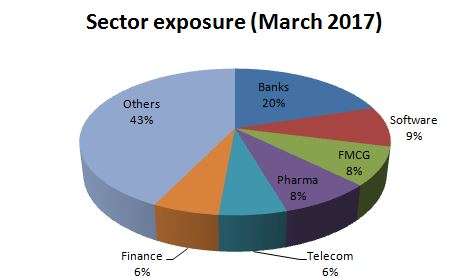 The fund can also very quickly shift exposures. For example, post the November 2016 currency withdrawal move, the fund sharply cut holding in financial services from 23 per cent of the portfolio to 16 per cent and hiked consumer goods from 3.8 per cent to 7.4 per cent. Equally quickly, it added back to financial services after stocks corrected to lift the exposure up now to 26 per cent, picking up stocks such as Axis Bank and IDFC. Exposure is primarily in private sector banks.

With top holdings such as Power Grid Corp, Tata Chemicals, HDFC Bank, and so on soaring over the past year, ICICI Pru Top 100 returns well above the Nifty 50 and the Nifty 100. Rolling the fund’s 1-year return over the past 3 years, it has beaten both indices 85-87 per cent of the time. 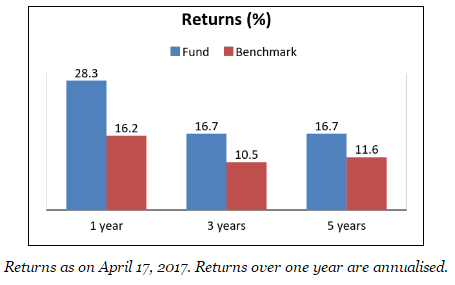 Against its peers is where the fund falters. In the 3-year period, the fund slips down to the second quartile in its category. Rolling 1-year returns for the past 3 years, the fund has managed to outperform the category just over half the time. On this metric, the fund has only just begun to improve performance.

On risk-adjusted returns too, measured by Sharpe, the fund has just begun to show an improvement. In 2016, the fund’s Sharpe ratio was below the category’s average while it was more volatile than the average. Now, the fund has crawled up to match the category’s Sharpe average, though it remains more volatile. The fund’s portfolio churn is also much more than most other large-cap funds, which adds to its volatility. While other funds such as Invesco India Growth and SBI Magnum Equity do sport similar consistency profiles, they have a better showing on risk-return and volatility metrics.

The fund’s current portfolio has a slight contrarian tilt by way of its pharmaceutical and telecom holding, and lack of a significant consumption turn. It thus requires a longer timeframe to perform, if the market has to revalue these sectors. ICICI Pru Top 100 has a strong long-term record, with 3-year rolling returns beating the Nifty 100 almost all the time and the category 80 per cent of the time over the past five years.

The fund’s additional manager is Mittul Kalawadia. The fund has an AUM of Rs 2,040 crore.